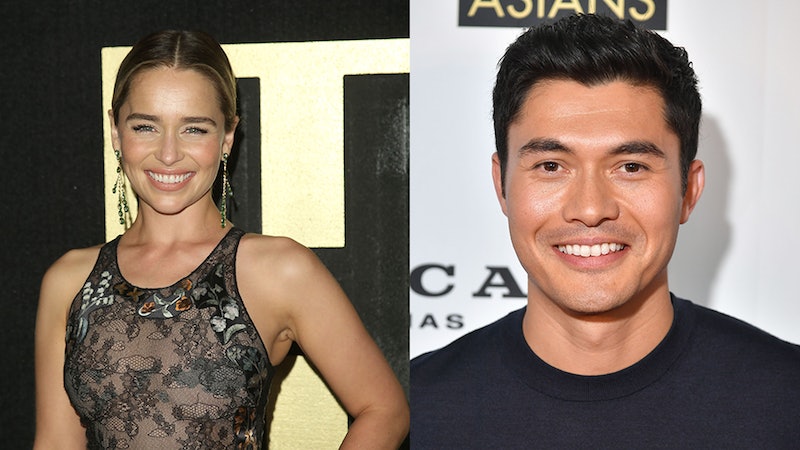 Next holiday season, all of your Christmas rom com dreams will come true, thanks to two of the most attractive stars in Hollywood. Henry Golding shared a still from his upcoming rom com with Emilia Clarke, teasing that Last Christmas is "going to be special."

"First official look at Kate and Tom from @lastchristmasthemovie ❤️🎄," the Crazy Rich Asians wrote alongside a photo of himself and Clarke in character on the streets of London. "November could not come any sooner!!" According to The Daily Mail, the film — which takes its name from Wham!'s iconic holiday single — centers around Clarke's character, Kate, who works as an elf in a Christmas shop. Noting that Kate is "not quite fully formed as an adult," Clarke told the outlet that her character, "hasn’t got her act together, she’s just lost ... [Kate is] this hopeless young lady carrying her belongings in a wheelie bag. She’s always on her phone, always on Tinder, always getting drunk."

"It’s first and foremost a love story set in 2016, against a backdrop of Brexit and Trump," director Paul Feig said about the plot of Last Christmas . "And a chance to go against so much intolerance and see what a melting pot London, and the world, is."

Golding — who was cast in the rom com after working with Feig in this summer's thriller A Simple Favor — said that his own character, Tom is "out of sync with the modern world. I think he sees [Kate] as a bit of a lost soul and tries to bring her out of herself."

"I love Henry Golding so much," Feig gushed about the actor to The Hollywood Reporter back in September. "He's the greatest guy and the nicest man in the world. And he works so hard and he's just a team player. He's so elegant. I feel like I've got my own personal Cary Grant now, so it's very exciting."

Last Christmas will also star Emma Thompson, who co-wrote the romantic comedy alongside Bryony Kimmings, as Kate's mother. "She had to leave the former Yugoslavia to come to Britain and now feels unwelcome because of Brexit," Thompson told the Daily Mail. And while she explained to the paper that Last Christmas isn't a musical — and, in fact, doesn't feature a lot of George Michael's music — the Oscar winner did reveal that she met with the late singer to talk about the project.

"I’d met with George Michael," Thompson said. "He was concerned about the homeless, which is a large part of this story. We spoke a lot about life and death, and there’s a lot of that in this film as well."

In addition to wrapping production on Last Christmas in London this month, Clarke is also preparing for the final season of Game of Thrones, which is set to premiere on HBO in April. "It's bittersweet, we've all done a lot of crying. There's been a lot of crying on set," Clarke told E! News about filming the final episodes back in September, joking that the end of the show sent her into an "existential crisis."

"People will scream and people will say, 'That's exactly what I wanted,'" Clarke said about the series finale in a May interview with The Herald Sun. "And some people will go, 'Huh?' – my mum, probably." And considering the actress has also teased that Daenerys' final scene in Game of Thrones "f*cked me up," it seems as if there are still plenty of surprises waiting for fans as the fight for the Iron Throne reaches its climax.

Thankfully, fans who are emotional over the end of Game of Thrones will have a chance to cry some more, cathartic tears when Last Christmas arrives in theaters in November 2019.