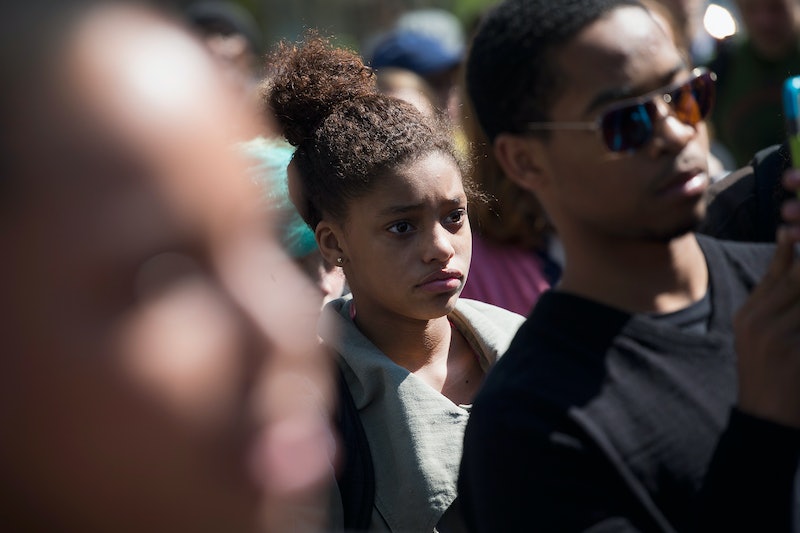 When Justine Damond was shot and killed by a police officer on July 15, the outcry over her death was immediate. A 40-year-old white woman from Australia, Damond was immediately praised for her alleged kindness, the fact that she led meditation groups, and her beauty. The juxtaposition of this response with how women like Sandra Bland and Charleena Lyles were treated was immediately obvious. If Damond had been black, the media's portrayal of her would've been very different.

She would have been blamed for her own death.

She would have had embarrassing details of her private life revealed.

She would not have been the reason a police chief resigned.

I reached out to a handful of people whose knowledge and instincts I trust because they work in criminal justice or adjacent fields and have the intellectual dexterity to see things for what they are — in their nuanced and messy ways. Most of the people I spoke to about this case agreed that these are the outcomes that would've been likely, had Justine Damond been a black American woman instead of a white Australian one.

Among the people I spoke with are a respected award-winning historian, a gifted current events writer, a law-school professor who has advised a president, a tested police reporter, and a nationally-recognized social-justice advocate. After hours of conversations, two things became very clear: they all agreed that almost everything about this case would be different had Justine Damond been black, but there was no consensus on exactly how.

White Women Are Always The Victims

In June of 2015, Ivie Ani, a journalist who now writes for The Village Voice, penned a critical article for The New York Times decrying the lack of attention paid to black women victimized by police. “The victims range from young to old to mentally ill, and date back decades, yet female police brutality victims’ names either are forgotten or were never known to the public,” she wrote. I spoke with Ani to see if she’d noticed anything in the coverage of the Damond case.

“If she were a black woman, of course it would be covered differently,” she tells Bustle. “The fact is that we know she lived a healthy lifestyle and all these other details. We don’t get that with the black women that are being killed. We didn’t know anything about Tanisha Anderson, Aiyana Jones, and so many others.” Ani says she finds that the news coverage has created an idealized image of Damond. “The narrative that’s being pushed with this particular case is just different from the narrative we hear when it’s a black woman...but none of this is a surprise,” she says.

"There’s no investment in the humanity of the black victims, not nearly as much as for white victims.”

In her view, black women victims are often reduced to racial tropes that render them violent, unstable, careless, and often complicit in their own demise. Ani says that on the part of the press, “There’s no investment in the humanity of the black victims, not nearly as much as for white victims.” For this imbalance to the addressed, she says news outlets must “try to be cognizant of the fact that the narrative is already lopsided. What can we do to make sure that we’re not perpetuating this unbalanced narrative?”

Glowing profiles like this one in the New York Times embolden critics who contend that victims are portrayed differently based on their race. The Times described Damond as “the luminous Australian in the Fulton neighborhood of Minneapolis, leading meditation sessions, scattering her communications with rainbow emojis and greeting people with, “Hello, beautiful!”

“It’s really becoming quite the fairytale story,” April Reign, a former lawyer, advocate in the movement for black lives, and the creator of #OscarSoWhite, tells Bustle. “All that’s missing is the glass slipper.”

Reign sees a lot of problems in the media coverage of the Damond case. “The hypocrisy that I see is both concerning and disappointing. What we see is an incredible amount of sympathy for Ms. Damond, which is absolutely understandable, but we have not seen the same for black victims of state-sanctioned violence, like Philando Castille and Sandra Bland,” she says.

"Mr. Castille was also engaged to be married and very little was said about that...Sandra Bland, similarly, had just graduated and had gotten a new job when we saw that her life was cut short."

“It’s unfortunate that every time a person of color appears to have been killed by police, we learn about all the negative things in their lives, not just them but their parents and everyone in their lives,” she added.

Reign noted the personal and endearing details the national press has pulled from Damond’s life to portray her as a loving fiancee who worked to make the world a better place. “We learn so much about her personal life, which painted her as an upstanding person, but Mr. Castille was also engaged to be married and very little was said about that...Sandra Bland, similarly, had just graduated and had gotten a new job when we saw that her life was cut short,” says Reign.

Black Women Are Always To Blame

I asked several of the folks I spoke with if they thought depictions of Damond’s white fragility reinforced the notion of black aggression, especially in black women. “I think that it does. Black women are always assumed to be superhuman,” Reign says, adding that black women are seen as exceptionally strong when they work to uplift their communities and protect their own. “One just wonders what the parity is, what the distinction is. And if it’s not race, what is it? If her life is so valuable to so many, then what is the distinction? That is the conversation that America needs to sit with.”

The images of victims splashed across newspapers, on social media, and on cable news tend to occupy two extremes. On one end are cropped images resembling mugshots that depict people of color as lower class miscreants, dangerous thugs or mentally ill. On the other extreme are glossy Instagram-like selfies, family portraits from in-store studios, and grinning graduates in caps and gowns. This uneven portrayal is why Reign believes “the media is complicit in this because it helps shape the narrative instead of being consistent in their portrayal of the victims and the perpetrators.”

"If she had been a black woman, Minneapolis and the rest of the country would have been criticizing the black woman, saying, ‘What are you doing running up on a cop?’ and ‘What do you expect would happen?’”

Ibram X. Kendi, author of the award-winning book Stamped from the Beginning, and the incoming founding director of the new Anti-Racist Research and Policy Center at American University, also believes there are important differences in how this case was handled in the news media because of Damond's skin color. “If she had been a black woman, Minneapolis and the rest of the country would have been criticizing the black woman, saying, ‘What are you doing running up on a cop?’ and ‘What do you expect would happen?’”

“The story that emerges with black women victims is to question and determine what she did wrong, what she could have done differently, ….like women who are raped are questioned, what could they have done differently? It’s blaming the victim,” he added. “Because she’s a white woman, her innocence and therefore the guilt of the black officer, appear to be apparent, which is racist.”

However, Kendi also says that the incident is “a double tragedy.” “A woman who should be alive right now is not...And there’s also the tragedy of America’s racist lens being applied to a situation that should be tragic no matter who it happens to,” he says.

Among the first few people who learned about Damond's shooting was Libor Jany, a reporter who covers crime for the Star Tribune in Minneapolis. His newspaper has a staffed police scanner which they monitor as news comes across the lines. “As soon as her identity was released, then things really took off. And within hours of her being identified that’s when we got the name of the first officer,” Jany tells Bustle. Though he could not comment on the specifics of how his newsroom made decisions about coverage as the story unfolded, he did provide insights from officers he has been interviewing for a related series.

“Local beat cops were frustrated with the police union because they were not as quick to rally behind the officer as they were in the past with other officers involved in similar shootings,” Jany says. “They were also upset about the leaks that were coming out of the police department. Mostly black and East African police officers were upset that because there were no witnesses they thought any leaks must have been coming from the department,” he says. The officers he interviewed said “a lot of them were shocked when they saw the paper the next morning” in which Noor’s identity had been released.

“The question that I’ve heard from people over and over again is ‘Why now?’ They’re questioning why this is happening. The chief of police has never singled out an officer the way she did in this case. She had never called a press conference in any other similar incident,” Jany says. “Her saying ‘So and so didn’t deserve to die,’ that’s a pretty forceful statement coming from the chief of police.”

In his years on the crime beat, Jany has become accustomed to a set of events following a high-profile case involving a white woman. “Generally speaking, that’s kind of an established pattern, that Natalee Holloway effect, when a white woman is either missing or is the victim of some crime. There seems to be an established pattern that the story is going to generate more headlines than a victim from another class or race,” he says.

Who Gets To Be Innocent?

Tracey Meares, a professor of law who served on President Obama’s Task Force on 21st Century Policing, has been observing the Damond incident cautiously, as she is unsure of what the ultimate outcome will be. But she did take issue with a statement Damond’s attorney made that was featured prominently in last week’s news cycles. The lawyer said that “she is the most innocent victim” of a police shooting he has ever seen. “I know what he is saying,” Meares tells Bustle.

“What he said was essentially, something like, ‘This is the whitest victim of a police shooting that we’ve ever seen.’ That’s how I see it. If you think about the different levels of privilege, that’s what that said,” she explains. “He doesn’t need to compare her to other victims to make his case. He can make his case based on her own merits.”

“She’s not even the most innocent person in that state, nor ever, so that characterization is racist.”

Kendi agrees. “That’s a racist idea because of the context in which it is said. It comes on the backs of all of these black victims of police violence being blamed for their own demise,” he says. “She’s not even the most innocent person in that state, nor ever, so that characterization is racist,” he says, in light of the hundreds of black victims who preceded her.

As our conversation drew to a close, Reign offered a sobering takeaway. “Unfortunately, Ms. Damond’s death is going to shine a light on police violence that people of color have been trying to shine for years," she says. "It’s only because it happened to a white woman that white people will start to pay attention to the state-sanctioned violence that has been happening in this country."