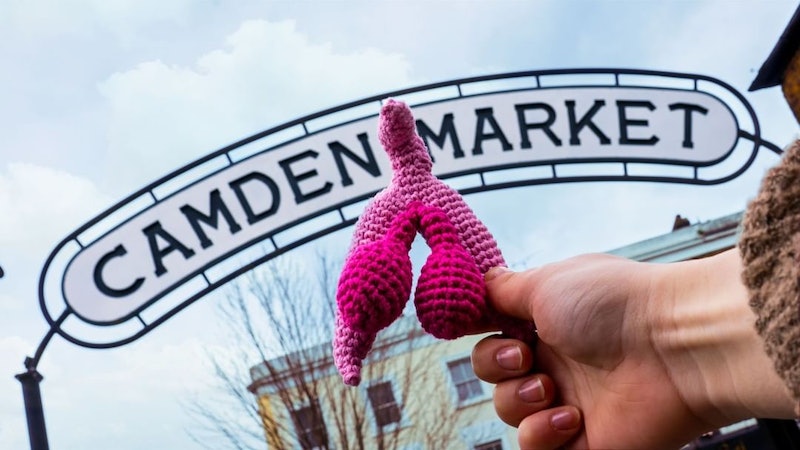 When it comes to sex there are more museums, exhibitons, and spaces dedicated to exploring the act, desires, and history than I can count. Whether you want to learn something new or are just a little bit curious about what people have got up to between the sheets for thousands of years museum spaces can be a great place to educate people. When Florence Schecheter saw in the gap in the market she set out to create something groundbreaking. The world's first vagina museum is opening soon in London and all organisers need you to do is show up and give a bit of love to the cultural attraction which is guaranteed to not be like anything you've ever been to before.

It seems incredibly fitting that the Vagina Museum has chosen in Sexual Health Awareness Week to announce when it’ll be opening its doors for the first time. On Nov. 16 you’ll be able to see the museum, which aims to educate people about anatomy and gynelogical health, break down stigma, challenge heternomative and cisnormative behaviour, and promote intersectional, feminist, and trans-inclusive values, in all it’s glory. It’s located in Unit 17 and 18 in Stables Market on Chalk Farm Road and will open its doors at 10 a.m.

Speaking about the opening of the museum in Vogue founder Florence Schechter said, “I’m hoping the museum will help this topic become less taboo. And if it becomes less taboo, it means that commercialisation won’t be able to benefit and profit off vulnerability.”

While The Vagina Museum will be opening its doors to the public in its first brick and mortar location in Nov. 2019 it's been a long time in the making. Schechter first had the idea for a museum dedicated to vaginas in March 2017 after she found out that there’s a museum in Penis Museum in Iceland but no vagina equivalent. The Vagina Museum's website explains, “we were pretty miffed (muffed?) when we learnt this but we thought, there's only one way to rectify this. Make one.” In 2017 Schechter and her team started to put on pop-up events, exhibitions, and workshops to get people talking about vaginas. Two years later they’re preparing to open their first exhibition in their new home in Camden Market.

So, what can you expect for the Vagina Museum? It’s going to be as amazing as it sounds. The first exhibition being run in the museum is entitled Muff Busters: Vagina Myths and How To Fight Them. Through film, workshops, an outreach programme, and social events the team at the Vagina Museum are on a mission to debunk all of the myths and legends surrounding the vagina. And if you can’t make it down to London you’ll be able to view the exhibition online.

Speaking to Mashable, Schechter explained that it’s the silence and stigma that surrounds the vagina that she wants to break. She said, “this has major implications such as people not going to their doctors about their health as they aren't comfortable talking about it, not seeking help when they're victims of abuse, and issues like consent and contraception."

With the aim of educating, empowering, and including people in conversations about vaginas, you’ve got to pay the Vagina Museum a visit. It’ll open to the general public on Nov. 16 with no minimum age requirement (other than in some film screenings) and admission will be free of charge. You can find it at Unit 17 and 18 Stables Market, Chalk Farm Road, London, NW1 8AH.

More like this
Here’s Where The NHS Nurses’ Strike Currently Stands
By Sophie McEvoy
Gen Z Are Twice As Likely To Identify As Queer, According To New Data
By Sam Ramsden
25 Inspiring Quotes From Black Women To Celebrate Black History Month
By Kyli Rodriguez-Cayro and JR Thorpe
Ben & Jerry’s New Sundae Flavours Are A Chocoholic’s Dream
By Sophie McEvoy
Get The Very Best Of Bustle/UK
Sign up for Bustle UK's twice-weekly newsletter, featuring the latest must-watch TV, moving personal stories, and expert advice on the hottest viral buys.