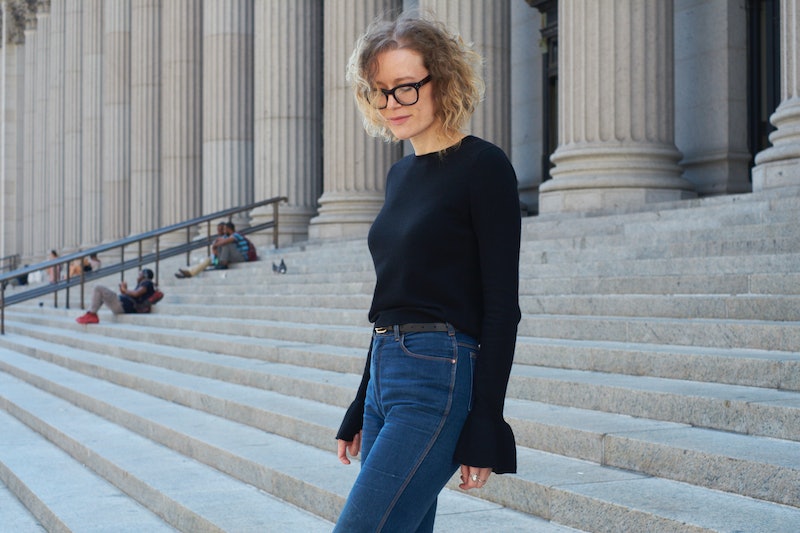 Home with the flu recently, I found myself going through all of my papers, a task I’d been meaning to do for years. I sorted everything into piles: cards from friends, travel mementos, boarding passes from special trips. It became clear that the tallest pile was going to be my medical files. Though I found plenty to recycle, I kept all of my ultrasound evaluations, blood tests, hormone level assessments, and the like. And it struck me: I was managing PCOS for years. I just didn’t fully know it.

In my early twenties, beset with heavy, painful periods, terrible breakouts, and mood issues, I started looking for answers. I came across PCOS after googling my symptoms. This was more than 10 years ago, and there wasn’t much out there about it. I found YouTube tutorials from bright, smiling women, proclaiming their lifestyles full of superfood smoothies and devoid of carbs were the way to tame the symptoms. There is no cure, I read.

Determined to take control of my health, I marched to my OB/GYN and asked her to send me for a pelvic ultrasound. The smoking gun of PCOS is that the ovaries usually present a bunch of small follicles, which form during ovulation, when the ovary releases an egg. Instead of letting the egg go, bodies with PCOS hold onto the egg and form a little fluid-filled sac. I figured if my ovaries were covered with cysts, that would be the confirmation I needed.

The thing with PCOS is that it’s subjective. If you have it, you might have to fight to have it acknowledged, much less receive a proper diagnosis. There’s no blood test that can definitively say, one way or another, whether anyone has PCOS. It’s a complicated combination of symptoms and cysts, and as I discovered, one OB/GYN’s PCOS might be another endocrinologist’s hormonal imbalance. (My diagnosis was reversed, and then reversed again, by various doctors over the years.)

“PCOS is a complex syndrome,” Dr. Erkan Buyuk, FACOG, who's the director of the Fertility Preservation Program in the division of Reproductive Endocrinology and Infertility at Montefiore Health System in New York, tells Bustle. “We don't know exactly what causes it and it has different manifestations. Hence, problems arise when it comes to diagnosis.” PCOS is usually diagnosed using “Rotterdam criteria,” he says, which means at least two out of three of these symptoms must be present: “Signs of increased male hormones either clinically or in the serum; irregular periods, every two to three months or less often; and polycystic-looking ovaries on the pelvic ultrasound.”

In my experience, I had to argue with that OB/GYN I saw to receive a referral for an ultrasound. She told me I wasn’t overweight and didn’t have facial hair or irregular periods, so I must not have it. The symptoms I had could be explained away with other issues. Please, I said. I did my research. Let me just confirm I don’t have it.

I don’t remember that first transvaginal ultrasound, but I remember many after that: the cramped rooms, the latex-gloved hands, the darkness, the gentle (and sometimes not-so gentle) prodding. The first one confirmed what I suspected: I had dozens of tiny cysts on each ovary. The follow-ups, over the course of 10 years, checked on two larger cysts, one in each ovary, that started out the size of a couple of centimeters each. They would grow.

For 10 years, as the abundant paperwork I found recently documented, I had yearly ultrasounds. As the cyst on my left ovary grew, I started seeing a gynecologic oncologist. Doctors didn’t think the cyst was cancerous, but I had moved to New York and my OB/GYN was retiring, so she sent me to her colleague, a cyst specialist.

So began the years of going to the cancer center on the west side of Manhattan, a disorienting experience for someone who (probably) didn’t have cancer. I learned that people are much nicer to you when they think you have cancer. I learned that probably not having cancer is different from definitely not having it, and that the anxiety that unsureness brings is vertiginous.

The gynecologic oncologist advised against surgery at first, because the left cyst had grown to just the size of a grape, and he might not be able to find it even if he cut me open. But he suggested I start having ultrasounds every six months. And he wanted to put me on birth control.

Every single healthcare professional I saw, from the time of my diagnosis to the present day, told me that birth control was the answer to my problems. Hormonal birth control stops ovulation; if my ovaries stopped spitting out eggs every month, they wouldn’t be able to hold onto them anymore, and cysts couldn’t form.

But I had taken the Pill for two years starting when I was 16, and it completely messed up my hormonal system. I wasn’t going down that road again. So I submitted to the ultrasounds, the poking and jabbing, and hoped I wouldn’t have to have surgery.

One day I wound up at my doctor’s for an emergency visit, in epic pain, which had started that morning, coincident with the beginning of my cycle. An ultrasound told us that the cyst had grown again. I had never experienced pain like that before. My doctor advised I schedule surgery for a few days later. But then the pain went away. He assured me it would be back, but I couldn’t fathom rushing into surgery like that. Instead, I embarked upon a yearlong saga with alternative medicine.

I spent the better part of that year seeing an acupuncturist and herbalist who plied me with supplements, abdominal castor oil packs, and abdominal massage to help “shrink the cyst.” I spent thousands of dollars. An ultrasound halfway through this process showed that one of my ovaries had shrunk a bit — enlarged ovaries are also part of the deal — but the cyst had grown. It was now the size of a lime.

In the end, it turned out that the cyst was a dermoid cyst, which means it wouldn’t have shrunk, no matter how many rounds of acupuncture I had. Radiologists had conjectured that my cyst was fluid-filled, thus potentially shrinkable, but it was not. Dermoid cysts often contain hair, teeth, skin. I was disappointed to find out that mine had hair and skin, but no teeth.

This all came to a dramatic climax in late 2017, about a year after my doctor first suggested I have surgery, when I went to sleep and then woke up again in serious pain — not the first time this had happened over the course of that year, I might add. But it was the first time the pain didn’t stop. I’d been warned that the pain could be a sign that my ovary was twisted, or in torsion, or that the cyst had ruptured. If either of those things happened, I was to repair to the nearest emergency room. Both could be life-threatening if not treated immediately.

After over 24 hours in pain, I woke in the middle of the next night and asked my boyfriend to call an ambulance. The next few days bubbled in and out like a fever dream; I was in a fugue state, hopped up on morphine and in indelible pain. I demanded emergency surgery, but a kind and very patient doctor strongly recommended I wait until a surgeon could take out the cyst laparoscopically. The recovery would be much shorter, complications were less common, and I’d be left with much tinier scars.

I will forever be grateful to that angelic doctor, who sat by my bedside as I screamed for the cyst to be cut out of my body and sympathetically repeated himself over and over. My boyfriend scrambled to line up a surgeon who could do it on short notice. (Turns out the best laparoscopic surgeons in New York City are not available at the drop of a hat.) My gynecologic oncologist had recently moved, but his former partner agreed to take the case.

I never wanted to have surgery. But that’s PCOS: You don’t get to choose. You can manipulate your body — some say the answer is birth control, or androgen-blocking medication, or a gluten-free, dairy-free, low-carb lifestyle. But you can’t make your body stop holding onto the eggs it should be letting go of every month.

It seems there’s still a lot of misinformation out there, but these days, PCOS is widespread, and it’s only becoming more mainstream. “PCOS is one of the most commonly researched hormonal diseases, since it is the most common hormonal disease of women of reproductive age,” Buyuk, who is also an associate professor of obstetrics, gynecology and women's health at Albert Einstein College of Medicine in New York, says.

Every single time I tell this story, I am met with the revelation that the listener, too, has had this happen to her, or her mother, or sister, or best friend, or wife, and is still looking for answers. This is a women’s disorder. If men could come down with PCOS, you better believe there would be a different level of research and studies out there.

For now, doctors are still learning about what causes PCOS, and how best to cope with it. "[PCOS] affects approximately six to 10% of all reproductive aged women,” Buyuk says. “It is not surprising to meet women with the same disease quite often. Unfortunately, we don't know the exact cause of PCOS, and hence we don't know why it is so common.”

I recovered well from my surgery, but I still don’t take medication to mediate my ovaries. I have to have a yearly ultrasound until I stop ovulating. This could happen again; after all, I have that tiny dermoid cyst on my right ovary, which I’ve had all these years. Even if I took medication, that cyst could grow. (My surgeon checked it out laparoscopically, but concluded that it was too tiny to be removed.)

I eat well. I exercise most days. Sometimes I get acupuncture or a massage. I try to meditate, to think positively, to get fresh air. I don’t know if one of the most heartbreaking symptoms of PCOS — infertility— will apply to me, as I’ve never tried to get pregnant. Doctors have told me over the years that they have no indication to think I’m infertile. Maybe I’ll find out someday.

Over the years, I’ve heard so many similar stories from other women diagnosed with PCOS. They had to fight to receive a diagnosis. Their doctors (often men, but not always) fought with them, told them they couldn’t have it. They were presented with misinformation, false starts, faulty prognoses. PCOS is a shapeshifter. It presents in as many different ways as there are people who have it. And if you do have it, don’t worry: You’ll be OK. You have a whole crew of amazing, strong, badass women in your corner. We have it too.