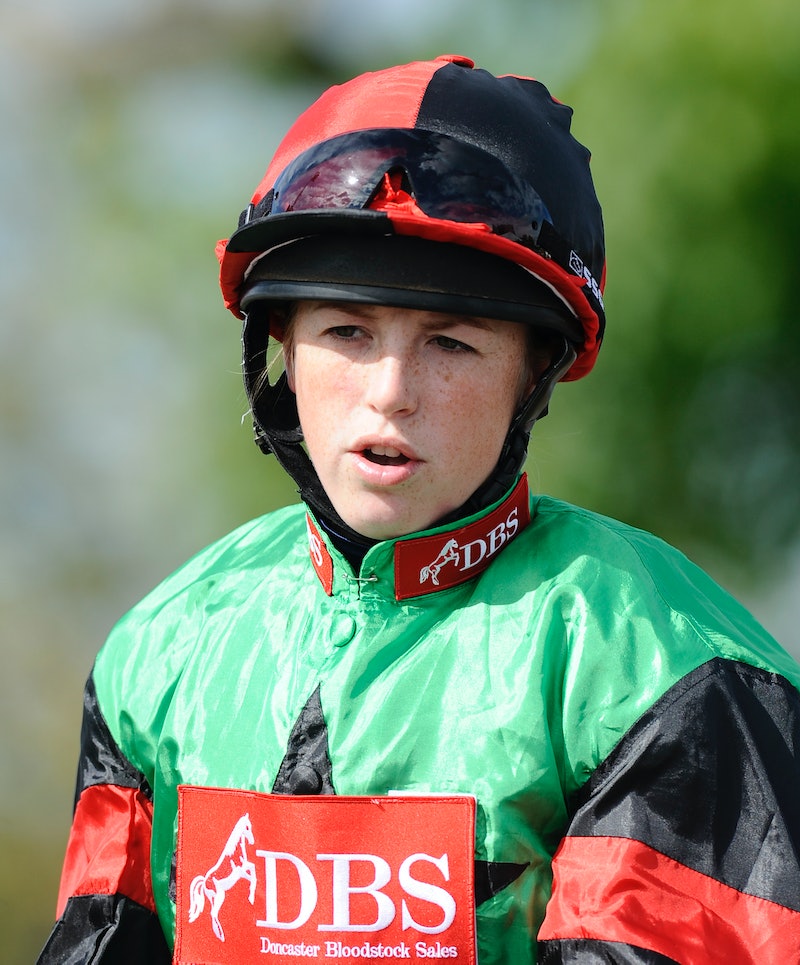 When she was only three years old, Sophie Doyle knew. The 31-year-old jockey remembers spending Saturday mornings dragging her rocking horse in front of the TV and putting on her mother's racing outfit. Then, Doyle tells Bustle, when the horse races came on, she'd "just ride the horse all afternoon while the races were going."

Born into an equestrian family — she says there are photos of her mother, a trainer, still riding a horse while eight months pregnant — Doyle "picked it up early." Today, after years of training and a decision to relocate to the U.S. from her native UK, she is a rising racing star who'll compete in this year's Kentucky Oaks, a race held at Churchill Downs the day before the Kentucky Derby.

Doyle is part of a tradition of female jockeys in the U.S. — one that goes back to 1968, when Olympian equestrian Kathy Kusner sued the Maryland State Gaming Commission for the right to obtain a jockey's license. In the half century since, six women have ridden in the Kentucky Derby, while several more have ridden in the Belmont Stakes, and Preakness Stakes, the races that make up racing's elite "Triple Crown" — in fact, Julie Krone won the Belmont Stakes in 1993.

And female jockeys who haven't won any high-profile races still make careers racing at tracks all around the U.S., working grueling hours and constantly risking injury as part of a group that CNN dubbed the "worst-paid and most seriously injured athletes in any professional sport.”

But you might not even know female jockeys exist (According to the Jockey's Guild, they make up 8% of the roughly 1,500 licensed jockeys in the U.S.). If you do know that women can compete in races, you may have noticed that often, coverage of female jockeys focuses on questions that look at them as a larger group, like "why aren't there more women in racing?"

While that's an important question to ask, it's also important to make the individual women of horse racing visible, to hear their personal stories of success, struggle, and sacrifice, to celebrate women in racing for who they are — gifted athletes who are often underpaid and regularly risk life-threatening injury, just because they can't imagine life any other way.

Jockey Sophie Doyle and former jockey Donna Barton Brothers tell Bustle what it's really like to be a jockey who also happens to be a woman.

Donna Barton Brothers, 53, grew up thinking that having a mother who worked as a jockey "was the most mundane thing in the world." Brothers' mother, Patti Barton, was one of the first licensed female jockeys in the U.S.. She was also the first woman to win 1,000 races and a one-time guest on the Tonight Show. Brothers' older brother and sister worked as jockeys, too.

Brothers grew up riding, but never thought of taking up the family business. "I didn't think I wanted to be a jockey because it just didn't feel that challenging," she tells Bustle. "I mean, my mom, and my brother, and my sister were all jockeys. How hard could this possibly be, right?"

After graduating early from high school, Barton worked as an exercise rider who helped race horses stay in shape between competitions. In 1987, at 21, she gave racing a shot, just to prove to herself that she wasn't actually interested. "I literally rode that race to eliminate that as a career option," says Brothers. "After watching so many races, I didn't have any real concept of how difficult it was to ride a race, or how exciting it is."

But the race itself changed her mind. "I rode my first race and, oh my God!" recalls Brothers. "That's when my passion was lit, when I suddenly was like, 'Oh my God, I love this!'"

Brothers then committed herself to racing; she spent her apprentice year (the year beginner jockeys first start competing) going to the track seven days a week, often showing up at 5:30 a.m. "I didn't date anybody, I didn't have any hobbies," says Brothers; she eschewed wearing shorts because she didn't have time to get a tan. "I just ate, drank, and breathed horse racing, that was it... it ends up being your life, because it's not really a job, it's a lifestyle."

Brothers took her mother's attitude regarding sexism into her racing career: "I didn't ever hear her say anything about being treated unfairly because she was a woman," says Brothers. "If there was anybody who wasn't riding her on their horses, [she felt it] was for one of two reasons: either she wasn't good enough yet or they didn't realize how good she was. And she was gonna work to rectify whatever the situation was. I felt the same way — that if somebody wasn't riding me, it was because either they didn't know how good I was yet, or I wasn't good enough yet. And I would work to rectify the situation whatever it was."

The jockey lifestyle paid off for Brothers; she's one of the most decorated female jockeys of all time. In the time since she retired from racing in 1998, she's become an on-air personality for NBC Sports and cofounded the Thoroughbred Women's Network, an organization that connects young women interested in any aspect of the thoroughbred industry with female mentors.

But one of her proudest moments came early in her career, while competing at a jockey challenge racing event. Brothers' mother was in the audience when she won. "When I got off my horse and went over and talked to her, she said, 'Congratulations.' She said, 'You have surpassed me.' She said, 'And not only are you a great jockey, you're a better jockey than I was.'"

"There were lots of horses that I rode that were meaningful, and stakes races that I won that had great meaning for different reasons," says Brothers. "But as far as moments go, that was one of the best."

Sophie Doyle never let her focus up from those days of playing jockey in her living room — though not without any roadblocks. Her mother, worried about the physical dangers of the sport, initially encouraged her to take up the equestrian sport eventing (which involves show jumping and dressage instead of racing) instead. But Doyle's "need for speed" prevailed in the end.

She began riding as an apprentice in 2010 in the UK, but after a trip to the U.S., she decided to move permanently to take part in the country's greater number of racing opportunities. Since relocating in 2013, Doyle has won at a number of high-profile races, including the Fair Ground Oaks and TCA Stakes. The wins "keeps you having the buzz," says Doyle. "It brings you to a place where you know you're on the right path and doing the right thing in your life."

An average workday for Doyle will start at 5:30 a.m., when she'll begin riding. She'll ride throughout the day, and often follow it up with a high-intensity fitness class like Orange Theory. She'll also constantly be on the lookout for potential ways to get injured. In racing, injury is, she says, "always the question of, not if but when. When is and accident about to happen?" According to CNN, there have been 13 horse racing-related fatalities since 2000, and at least 71 jockeys who have acquired permanently debilitating injuries while racing. Doyle points out that even something small, like a horse stumbling or getting startled, can lead to serious injury — like the broken collarbone she suffered in 2016. "You kind of have to have a different nature about you" to handle the risks.

Which, Doyle thinks, is probably one factor in why there aren't as many female jockeys, even though many young women are passionate about horses. "Some girls will come in to race thinking, 'it's great, I love horses, I want to be a jockey,' but there is risk involved," says Doyle. The ones who are best suited to the sport, she notes, "say, 'you know what? I'm OK with that [level of risk]. If it happens, it happens. I'll get straight back on and be ready to go again.'"

For Doyle, the pleasure outweighs the risks: "I enjoy every ride that we get."

More like this
How To Politely Reject Someone Who Keeps Asking You Out
By Laken Howard and Lexi Inks
Angel Number 111 Is All About Manifesting Your Power
By Brittany Beringer and Nina Kahn
Here's Your Daily Horoscope For October 5, 2022
By Mecca Woods
You Can Get Custom Podcast Recs From Spotify Based On Your Zodiac Sign
By Brittany Beringer
Get Even More From Bustle — Sign Up For The Newsletter