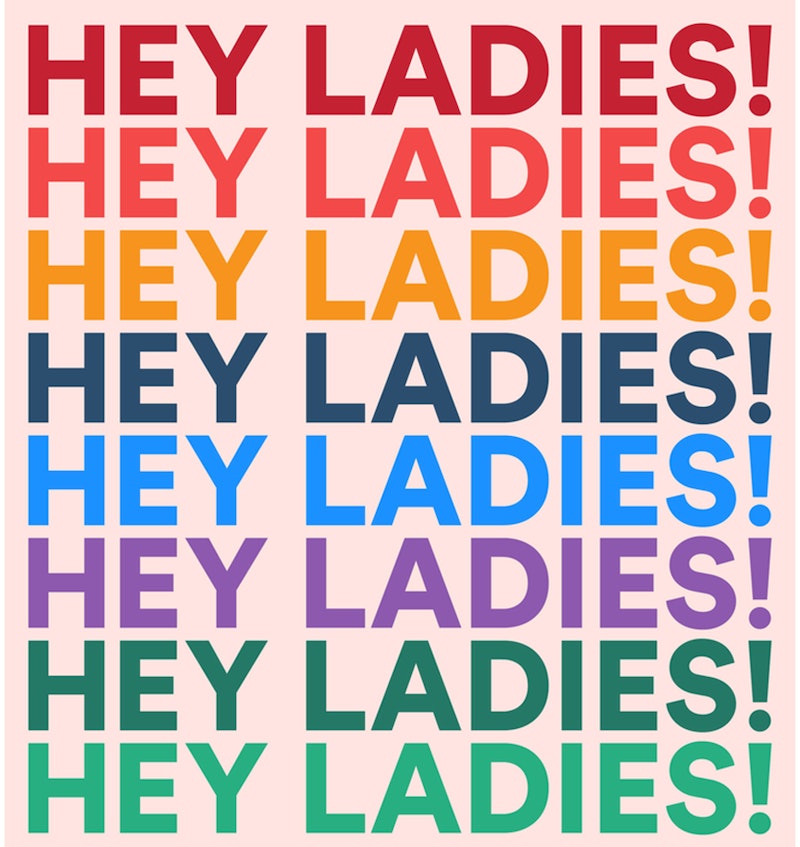 There’s a certain kind of email familiar to many women in their 20s and 30s. Its purpose is usually to plan a night out, a holiday weekend trip, or maybe a bachelorette party. A lot of people are CC’d who are tangentially connected to each other — a cousin, a BFF from childhood, a college roommate — and they all have differing opinions. These emails may include a detailed packing list (“Jean shorts. White pants. Hair ties.”) and itinerary (“6:25 p.m.: Pre-game with margs and cucumbers. 6:45 p.m.: Get cab to Brooklyn.”). After five or 30 more messages and dozens of exclamation points, you end up owing someone money for a share house or matching thematic tank top you didn't plan for, payable by Venmo by EOD. These emails open with a greeting that elicits both stress and delight: Hey ladies!

In 2013, Michelle Markowitz was on such a thread, and she did what any normal human would: lovingly complained about it on Twitter. Caroline Moss, who had just received similar messages related to multiple friends’ weddings, responded. They connected, and that exchange led to them writing a parody of all these Hey Ladies emails for the feminist (now defunct) website The Toast.

“We were like, either everyone’s going to be like ‘I have no idea what you’re talking about and this is only an experience the two of you have had,’ or maybe other people will say, ‘Wow, this is exactly what I’m experiencing’,” Moss tells Bustle. “Very luckily it was the latter.”

From that first post — before Markowitz and Moss ever met in person — Hey Ladies was absolutely beloved, hilarious in its accuracy and exaggeration. It became a recurring feature on The Toast.

“It was really surprising and cool how people were tweeting about it and saying that they could relate to it, [from] friends that you have on Twitter and girls that you went to high school with that you hadn’t seen in ten years,” Markowitz says. “It went across a whole cross-section of women that were like, ‘I’ve had this exact experience and I should send you my real Hey Ladies emails to prove it.’”

Hey Ladies!: The Story of 8 Best Friends, 1 Year, and Way, Way Too Many Emails by Michelle Markowitz and Caroline Moss, $15, Amazon

The Toast shut down in 2016, but Markowitz and Moss’s book Hey Ladies!, out today, allows readers to spend a year with the ladies they’ve come to love-hate. Told through emails, as well as texts and illustrations, eight friends plan a Galentines Day outing, an ill-fated book club, and eventually a wedding, with all of the ancillary parties and precisely-dyed shoes that joyous event entails. Among them are Jen, who insists she’s not a Bridezilla; Ali, the PR maven whose interns are tasked with coming up with party themes; Morgan, the lone Brooklynite who’s passed over for Maid of Honor; Caitlin, purveyor of her own lifestyle brand; Nicole, who is broke while trying to develop her own lifestyle brand; and Gracie, who keeps a cool head and only skims the emails. Their lives in New York are still inspired by Sex and the City, and their messages are by turns supportive and passive aggressive. They complain and humble-brag about their relationships, and they’re all committed to their careers (even if their current career is freelance plant watering). The book is relatable, cathartic, and hilarious. Jen writes, “Since I’m the only one engaged to be married, would it make more sense if we skipped the book club and I just told you guys over gluten-free biscotti how I was able to make a foreverlasting, loving, and worthwhile relationship work and thrive with the love of my life!”

"It went across a whole cross-section of women that were like, ‘I’ve had this exact experience and I should send you my real Hey Ladies emails to prove it."

The authors’ writing process for the book was mostly improvised. They would have an idea of where the story would go, then each pick a character and respond on Gmail and text in real time.

“Because it was through email, it was written very much in the way you would write an email,” Markowitz says. “I’d be out at Duane Reade and get this email from Caroline doing a character where it was like, this is really aggressive and edgy and I’m having a human reaction to it, so I’ll respond as this character.”

At times, they began to embody the very thing they were satirizing, particularly when their schedules didn’t line up. One author might send seven emails at once while the other waited to respond for several days.

“There were times we’d have sidebars going as ourselves and the emails we’d send each other would become very Hey Ladies because we weren’t on the same timeline,” Moss says. “We got into this zone where we were performing Hey Ladies as each other to each other.”

“These people clearly have fun together and can’t stop getting together and enjoy each other,” Markowitz adds. “But something about firing up the email at nine in the morning when they get to work and they just had two cups of coffee, where it’s more the aggressive version of themselves for some reason.”

There’s truth to the exaggerated ways we portray ourselves on the internet, even to our friends. Along with the visceral reactions to the immediacy of that communication, there’s a performativity to these exchanges. We want to show our best selves, whether that means, like Katie, sending a selfie in bed with her boyfriend, or like Caitlin, inviting everyone to a CaitlinTalk (“it’s like TED Talk but me, Caitlin”). The huge audience of social media increases this pressure, and it’s easy to post the same mushy captions (“He put a ring on it!”) as everyone else.

“When you get engaged it’s your time, you should enjoy it and you should be happy,” Moss says. “What we’re saying is that it really seems like there are only 10 things to say. And that’s not to say you’re not creative enough to come up with your own thing, it’s that this is how we live now. This is the world you live in.”

Markowitz and Moss understand how wild it can be interacting with a large group of friends. In the introduction they write, “We’re not making fun of you or your friends or women in general. We’re making fun of ourselves, and how mass emails to big groups seem to bring out the “OMG SO EXCITED!!!!!!!!!” in all of us.

"And that’s not to say you’re not creative enough to come up with your own thing, it’s that this is how we live now. This is the world you live in.”

“We’re not going after a type of woman,” Moss says, “we’re going after the weird cultural thing that has become so ubiquitous.”

“We’re not making fun of these people, we are these people,” Markowitz says. “We put that there because that was a very real concern that when you’re writing women, and you’re writing flawed women—some are what people would call ‘basic’—that it could be read that way. . . One thing we tried to do in the book is give everyone more humanity, so it’s not just the worst parts or the more basic parts, and you kind of see where it comes from.”

The ladies are familiar but not stereotypes, and like SATC, it’s easy to see yourself in them (I’m a Morgan). Though in some ways, their arguing and over-the-top cluelessness seems more at home in Seinfeld. But just like with “basic” women, digging deeper into the book reveals something much more nuanced and interesting. Hey Ladies! highlights and gently skewers the annoying parts of ourselves—expecting too much of the people we love, trying to make everyone happy, not saying what we mean, saying exactly what we mean. It’s about navigating the awkwardness of online communication, the joys and difficulties of female friendships, and the necessary invisible labor of planning events.

“That’s what planning looks like,” Moss says. “It’s overly enthusiastic, like ‘Ahh! We’re so excited, everything is great. By the way, everyone needs to be at the train station by 4:17 or we’re going to lose the $200 deposit we have on this reservation.’ You have to balance the project manager —like emails you might send at work with the thirty-seven exclamation points.”

For all of its (very, very funny) jokes about juice cleanses and the lame guys they meet at bars, Hey Ladies! is a deeply empowering book in which women take charge, know their worth, and make lifelong commitments to their friends. The ladies know each other intimately, flaws and all, and love each other anyway. These are women who will drop everything and be there for one another in an emergency. They are fun and loyal and attentive, with a devotion that goes deeper than any romantic relationship, which is why they can’t give each other up. Our squads may drive us wild, but they’re ours.

“All these girls met in college, and like a lot of your college friends, it’s people that maybe if you met ten years down the line if you worked with them, you wouldn’t necessarily become good friends,” Markowitz says. “But there’s something about your college friends where you’ve sort of chosen each other and it’s like a life thing."

While the real-life years of wedding planning and epic St. Patty’s Day hangs are numbered, friendships and emails like these will likely continue.

“I know that one day we’re going to miss all the Hey Ladies emails and other priorities take over, Markowitz says. “I’ve seen it in my own life where my friends went from bachelorette planning to ‘baby’s first birthday’ or ‘girls night out'.... Communications can change but the feelings are exactly the same.”