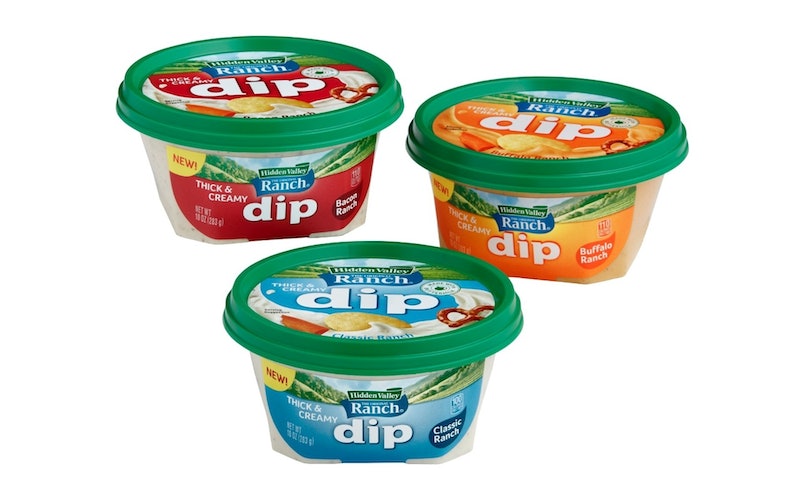 I’ll confess that I’ve never really been a ranch dressing person — but I do love a good dip, particularly if I can dunk potato chips in it, so it’s possible that the following news might convince me to change my standpoint: Hidden Valley’s new Ready-To-Eat Ranch Dips are here. What’s more, they come in a bunch of flavors… including a bacon one.

I may not be a ranch person, but I am definitely a “bacon makes everything better” person, so, uh... Bacon Ranch Dip, here I come.

Although recipes for buttermilk-based dressing date back to 1937, what we now know as ranch was created in 1949 by Steve Henson, according to Thrillist. At the time he perfected his own buttermilk dressing recipe, Henson, who was originally from Nebraska, was working as a contract plumber in Alaska; when he and his wife, Gayle, moved to a ranch in California in 1954, though, the dressing came into its own. They sold it to folks who visited the ranch and local stores for a number of years until 1972, at which point they made a sale for the recipe to Clorox for a whopping $8 million.

The name of the ranch? Oh, you know, just a little place called Hidden Valley. Maybe you've heard of it?

Since then, the Hidden Valley brand has grown into a multi-million-dollar business; according to Statista, Hidden Valley Ranch was the most highly ranked pourable salad dressing brand in the United States in 2013, accounting for around $416.3 million dollars’ worth of sales — and that’s not even counting all of the other ranch-based products the brand makes.

Like, for example, dips. Ranch dip can of course be made from scratch — usually, it comprises buttermilk, sour cream, and a variety of herbs and spices like parsley, dill, garlic, and onion — but Hidden Valley’s packets of ranch dip mix have been a mainstay in American cooking for decades. Now, though, you can get the dip in ready-to-eat form — and in three different flavors, no less.

Intagrammer Junk Food Mom found Hidden Valley’s new dips at Walmart — and, indeed, a quick jaunt over to Walmart’s website reveals all the details you could ever want about the stuff. Arriving in 10-ounce plastic tubs, the dip reportedly has “all the ranch flavor” of a good dressing with a texture “that is meant for scooping and dipping anytime.” Want it on chips? You’re good to go. Veggie sticks? Also A-OK. Anything you can think to dip will work; such is the nature of a thick and creamy dip, as opposed to a more fluid dressing. The Classic Ranch variety keeps it simple with a buttermilk base and the standard array of ranch spices; Bacon Ranch adds actual bits of applewood bacon to the mix; and Buffalo Ranch includes the spicy tang of a good buffalo sauce.

Reviews are generally positive, too. Wrote one reviewer at Walmart’s website of the Classic Ranch flavor, “The taste is bold and flavorful and goes a long ways,” while another praised the Buffalo flavor as excellent for chips. “At first bite, the ranch taste was very predominant,” wrote the Buffalo reviewer, “but after a few chips and dip, the buffalo flavor blended nicely with the ranch.” At Pinch Me, reviewers described the Bacon dip as “thick and creamy,” with one noting that “you can definitely taste the bacon in the dip.” Heck and yes.

Shipping isn’t available for the Ready-To-Eat Dips, but the Walmart website should be able to tell you whether they’re in stock at your nearest brick-and-mortar location. You’ll find it on shelves, rather than in the perishable foods fridges; as Junk Food Mom noted to one follower who asked if she found it in the refrigerated section, “Nope. No refrigeration needed until opened.” Pinch Me further detailed that it’s usually “in the salad dressing aisle,” next to Hidden Valley’s regular bottled dressings. Price-wise, they’re around $3 a pop; where I am in the DC area, single tubs are $2.98, while two-packs are $5.76.