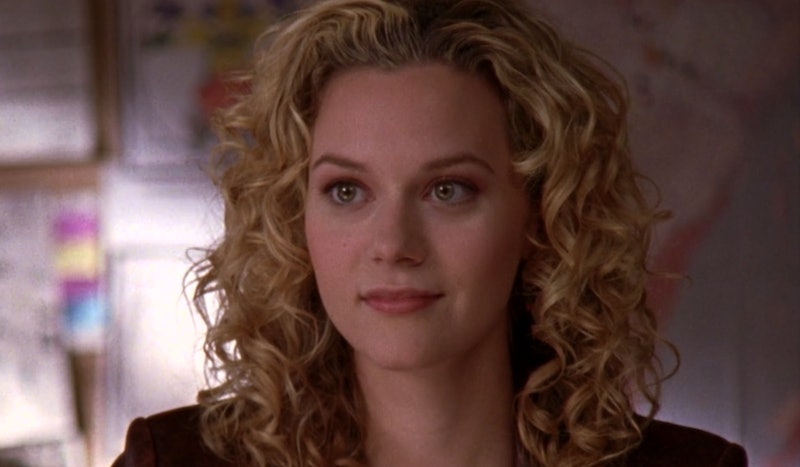 Peyton Sawyer will forever be a favorite One Tree Hill character. And on Monday, Hilarie Burton posted a One Tree Hill tribute in honor of the drama's 16th anniversary, and celebrating her iconic character. The series first premiered on Sept. 23, 2003, and 16 years later, Burton couldn't help but reflect on her time playing Peyton and just how much the character really meant to her.

As the actor noted on Twitter, while chatting with her husband, The Walking Dead and Supernatural star Jeffrey Dean Morgan, Burton realized exactly why taking on the role of Peyton still means a great deal to her. "Last night @JDMorgan and I were talking about the roles that will live with us forever," she tweeted. "He has his. Mine is Peyton Sawyer. I poured so much of myself into her. And I love all my brothers and sisters from OTH that did the same with their characters. Family. Forever. 16!"

Burton proved throughout her time on the show (both she and Chad Michael Murray, who played Lucas Scott, left after Season 6) how perfect she was as Peyton. As she recently revealed, this is the one role that will stick with her until the end of time — and understandably so. Though Peyton started off in Season 1 as a love interest for the main protagonist, Lucas, she became much more than that over the years.

Peyton turned out to be a great role model for young women. From opening her own club to following her music dreams to standing up for herself when she was pretty much all alone without any parental guidance, Peyton was a fighter. Between losing two moms, almost dying giving birth to her child with Lucas, and fighting off a stalker who pretended to be her brother, well, Burton definitely put her heart and soul into playing Peyton.

Even more so, Peyton knew what she wanted and wasn't afraid to say her true feelings, even if when it meant having to let go of Lucas. For example, in Season 5, Episode 5, a flashback showed Lucas proposing to Peyton, but she wasn't ready to get married. As Peyton explained to Lucas, she wanted to wait a year and continue pursuing her dream of music in Los Angeles. As difficult as the episode was to watch for Leyton fans, it also showed how important it is to do what's best for yourself, no matter how hard it might be.

One of the other reasons Peyton will probably always be with Burton is because of the real-life friendship she formed with Sophia Bush on set. As fans know, Bush portrayed Brooke Davis, Peyton's best friend on OTH. The two were thick as thieves both on and off screen. In a January 2017 with Refinery29, Burton opened about her friendship with Bush. "I think, underneath, there was an understanding between the two of us, like, 'we're in this to win it,'" Burton said. "I think when you're in the trenches with someone, whether you agree with each other at the time or not, once you're past it, there's a bond there you can't deny."

Looking back at her time on OTH, it's clear that the show allowed Burton to play an influential character for six seasons and create lifelong friendships. It's no wonder Peyton has left a lasting impression on the actor.

More like this
This 'One Tree Hill' Wardrobe Error Is Going Viral On TikTok
By Brad Witter
The Banned 'Friends' Ad Shows Monica As You’ve Never Seen Her Before
By Sam Ramsden
'Friends' Star Maggie Wheeler Offers Support To Matthew Perry After Reading His Memoir
By Alyssa Lapid
Ashton Kutcher Wants Danny Masterson “To Be Found Innocent” In Rape Retrial
By Jake Viswanath
Get Even More From Bustle — Sign Up For The Newsletter
From hair trends to relationship advice, our daily newsletter has everything you need to sound like a person who’s on TikTok, even if you aren’t.