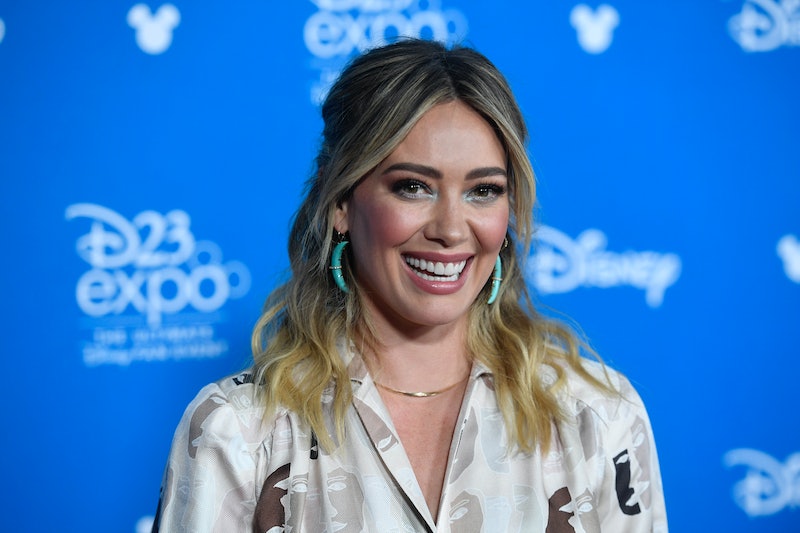 When fans meet up with 30-year-old Lizzie McGuire in the Disney+ revival, Hilary Duff's character will be in a much different place than the actor herself. But luckily, this disconnect has only served as inspiration for the actor. In an interview with E! News, Duff shared her ideas for the Lizzie McGuire reboot, and according to her, the possibilities are truly unlimited.

It's been more than 15 years since the final episode of Lizzie McGuire aired on the Disney Channel. And yet, fans couldn't have been more pumped to hear that a Lizzie McGuire reboot was finally happening when the news was announced in August. Although there aren't too many details out just yet, it's already been confirmed that the show will pick up when Lizzie turns 30. And according to what Duff told E! News at Saturday's 2019 Baby Ball, it seems like she's been busy thinking about what exactly that means for a girl like Lizzie McGuire.

"What are the struggles of a 30-year-old right now?" she teased. "What are the pressures that life throws in front of a woman who is 30 and doesn't have all the things yet?"

Duff continued throwing out ideas, including taking Lizzie back to her childhood bedroom. "Maybe there is something bad happening on her 30th birthday in the first episode? Maybe she's going to be in her childhood bedroom in the first episode?" Duff said. The actor also floated an idea for how the series could end: "Maybe at the end of the series we see her having a baby?"

It's good to remember that these are all just ideas — the Lizzie McGuire reboot hasn't started filming yet, and plot lines are, likely, only just beginning to form. "I don't know!" she said. "There's all this fun! We want to give fans what they want, but we also want to have a completely new show."

Given the fact that Lizzie's now an adult, it definitely will be a new show, especially considering the details that Duff has shared about the reboot in the past. In an interview with Entertainment Weekly, Duff said that the show will begin with Lizzie realizing that she's not quite where she thought she would be in her life, starting around her 30th birthday. Lizzie's engaged, working with an interior designer, and living in Brooklyn, but what if that hasn't turned out to be what she actually wanted?

“Lizzie’s 30 now and I really like the idea of her waking up on her 30th birthday and being like, This isn’t where I thought I was going to be,” Duff told EW. “She’s everyone’s best friend and what everyone loves about her is how relatable she is, so I really wanna go on that 30-year-old journey with everybody.”

This also means that Lizzie and her high school love, Gordo, are not together — but that doesn't necessarily have to be a bad thing. "I feel like them not being together is what was so good … it’s that one person that you’re like, 'Was he the one? Is it ever going to be?' You’re always kind of wondering," Duff said in a separate interview with Vulture.

E! News also reported that the show will start filming at the end of October, so it won't be long before fans get to find out exactly which of Duff's plans come to fruition on the small screen.

More like this
Hilary Duff Is “Optimistic” About A 'Lizzie McGuire' Reboot
By Alyssa Lapid
Man Meets Politics: ‘Boy Meets World’ Star Ben Savage Is Running For Congress
By Jake Viswanath
'That '90s Show' Star Callie Haverda Got Advice From Mila Kunis & Ashton Kutcher
By Brad Witter
'Friends' Star Maggie Wheeler Offers Support To Matthew Perry After Reading His Memoir
By Alyssa Lapid
Get Even More From Bustle — Sign Up For The Newsletter
From hair trends to relationship advice, our daily newsletter has everything you need to sound like a person who’s on TikTok, even if you aren’t.