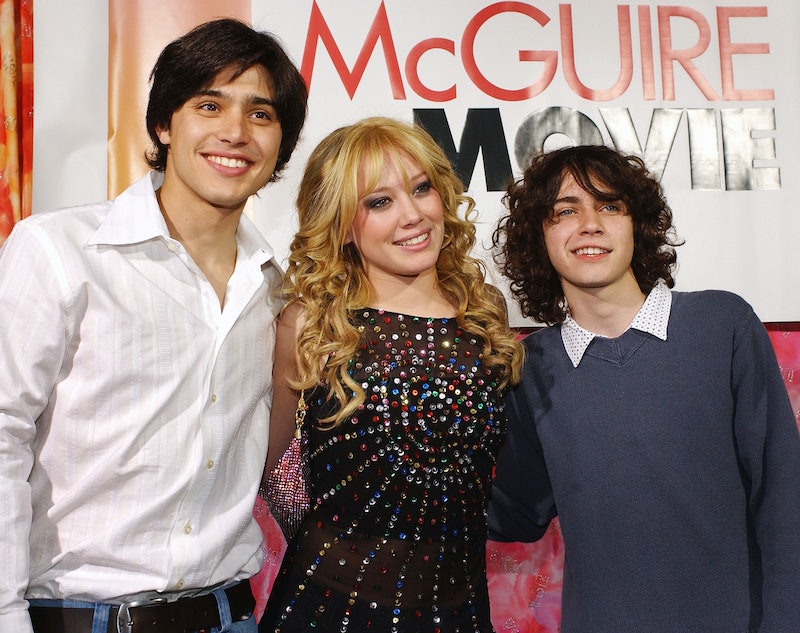 Fans might have had a picture-perfect plan for the Lizzie McGuire revival that include Lizzie and Gordo together. But, alas, Lizzie McGuire and Gordo won't be together in the revival. In fact, Lizzie will be engaged to someone who isn't her teen crush. And you know what, Hilary Duff herself thinks that's a good thing. At least, for now.

In an interview with Vulture, Duff was asked about whether she was "devastated" by the fact that Lizzie will be engaged in the revival to a guy who isn't her teen dream Gordo. "You know what," she said, "I don’t know if I was as devastated by that."

Instead, the actor said she saw it as an opportunity to pull at the heartstrings of the OG fans of Lizzie McGuire. "I feel like them not being together is what was so good … it’s that one person that you’re like, 'Was he the one? Is it ever going to be?' You’re always kind of wondering," she said. The pain is intentional, Duff told Vulture. "We wanted it to hurt everyone a little bit, and it’ll continue to hurt."

What might hurt fans most of all is if Gordo himself, Adam Lamberg doesn't return for the revival. For now, Duff is hopeful Lamberg will be part of the new series. "I really hope he’s going to be involved," she told Vulture. "We’ve been planning out the season and coming up with what everything looks like, and it’s so important for him to be there for part of it."

Since Lizzie McGuire, Lamberg has kept a low-key profile, appearing in only two indie films in the years since: When Do We Eat? (2005) and Beautiful Loser (2008). According to his LinkedIn, the UC Berkeley and Baruch College grad now works as a developmental officer at New York’s Irish Arts Center.

Back in 2014, Lamberg took to his Tumblr to talk about how acting might not be in his future. “I’m probably somewhere between the denial stage and the acceptance stage as to whether I still can/want to do this with my life,” he wrote. Perhaps, the new Lizzie McGuire will inspire him to give it another chance. At the very least, to give fans the chance to see if Lizzie and Gordo are endgame.

As for Lizzie, Duff has said that her life is a little all over the place in the revival. The show starts with Lizzie on her 30th birthday. She's working as an apprentice to a prestigious interior designer, lives in hipster Brooklyn, and is engaged to a man who owns a restaurant in SoHo.

“Lizzie’s 30 now and I really like the idea of her waking up on her 30th birthday and being like, 'This isn’t where I thought I was going to be',” Duff told Entertainment Weekly last month. Why? Because Duff wants Lizzie to be a role model to a new generation of girls. "She’s everyone’s best friend and what everyone loves about her is how relatable she is," Duff said, "so I really wanna go on that 30-year-old journey with everybody.”

No doubt, her fans want to that that journey and are crossing their fingers Gordo will be there, too.