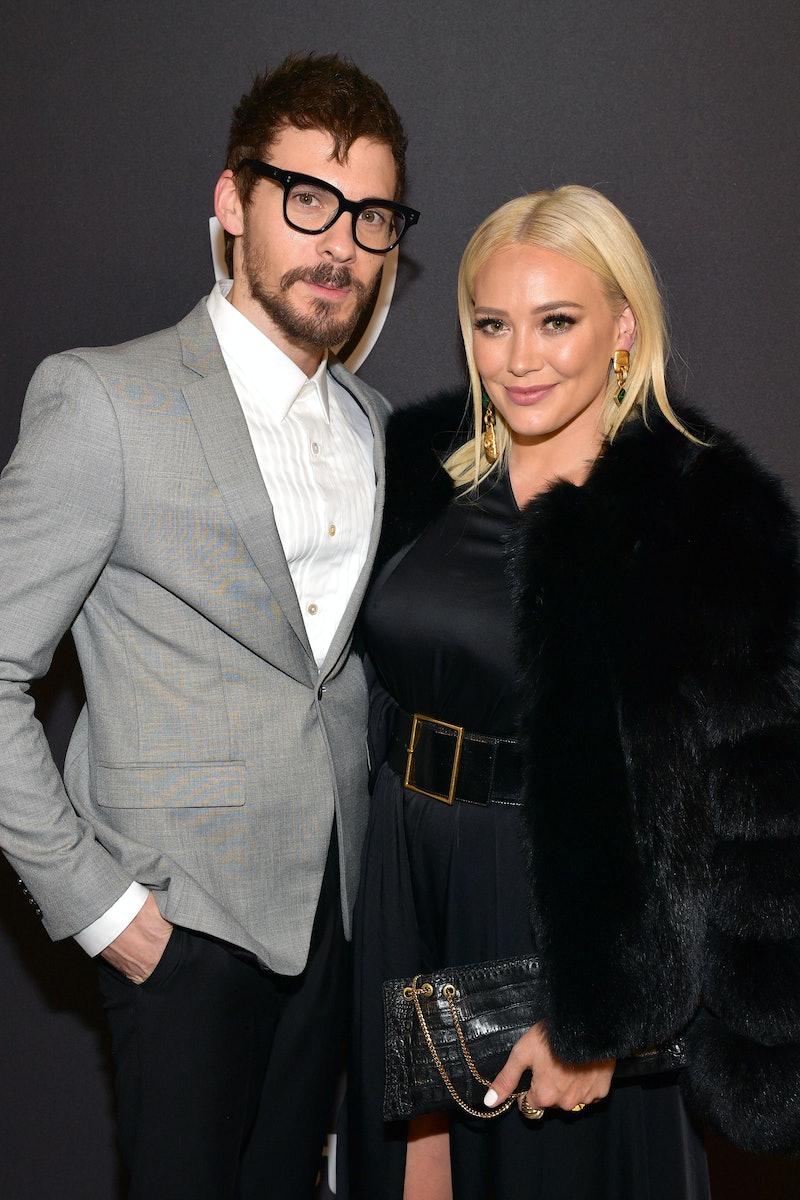 Here is some happy news that will definitely make you smile. Hilary Duff and Matthew Koma are engaged. The couple revealed their exciting announcement on Instagram on Thursday. Both Duff and Koma shared two adorable photos that appeared to be taken right after he proposed. The Younger star captioned her post, "He asked me to be his wife." As for Koma, he beautifully wrote, "I asked my best friend to marry me... @hilaryduff."

In the first image, Duff is wearing the biggest smile and showing off her stunning engagement ring. It's clear she's currently on cloud nine. If you take a closer look, it also seems like Duff is teary and even possibly has some mascara smeared underneath her eyes. If that's the case, who can blame her? As for the second picture, the actor and Koma can be seen sharing a sweet kiss.

Prior to their official engagement, there was speculation in September 2018 that Duff and the singer were engaged based on a ring she was seen wearing on that finger. The Haunting of Sharon Tate actor posted an Instagram selfie that also showed off a vintage gold ring. She captioned it, "This vintagey looking sparkly number from @foxandbond has me smiling today."

Her post was confusing at the time. So much so, even her sister, Haylie Duff, commented, "Ummm I thought this was something else." Clearly, she wasn't engaged last September, but is very much so now. (At the time of the engagement rumors, Bustle reached out to Hilary's reps, who declined to comment on her personal life.)

Koma and Duff's engagement hasn't been the only joyous news in their lives. In October 2018, they welcomed their first child together, a daughter, Banks Violet Bair. Duff also has a 6-year-old son, Luca, with ex-husband, Mike Comrie.

The newly engaged couple has been linked for awhile now, all while facing some ups and downs in their relationship. The musician and Duff were first connected in January 2017, according to Entertainment Tonight. That same January, the duo made their official red carpet debut at the 2017 SAG Awards. However, in March 2017, E! News reported they had split before reuniting months later, as confirmed by Duff on CBS' The Talk in December 2017.

At the time, Duff said on the daytime talk show, "It’s going so great. I mean, this is the third time that we’ve dated." She added,

"I think that you have history and a past with someone and love, and just because it doesn’t work out the first time, the second time, as long as there’s not too much damage done, then, it can always work out again."

You know what they say, third time's a charm. If you follow the "Come Clean" singer on Instagram, there's no denying she's blissfully happy with Koma and enjoying every single second being a mom to their daughter, Banks, and also Luca. Duff was right to keep trying with Koma, because here they are happily engaged and even more in love.

More like this
Hilary Duff's Husband Matthew Koma Has Her Name Tattooed On His Butt
By Jake Viswanath and Stephanie Downs
Britney Spears Shared The Real Reason She Shut Down Her Instagram Account
By Brad Witter
Twitter Is In Awe Of Taylor Swift’s “Lavender Haze” Music Video
By Jake Viswanath
Jennifer Coolidge Hunted For Jewels & Lashes In J.Lo’s Hotel Room
By Jake Viswanath
Get Even More From Bustle — Sign Up For The Newsletter
From hair trends to relationship advice, our daily newsletter has everything you need to sound like a person who’s on TikTok, even if you aren’t.