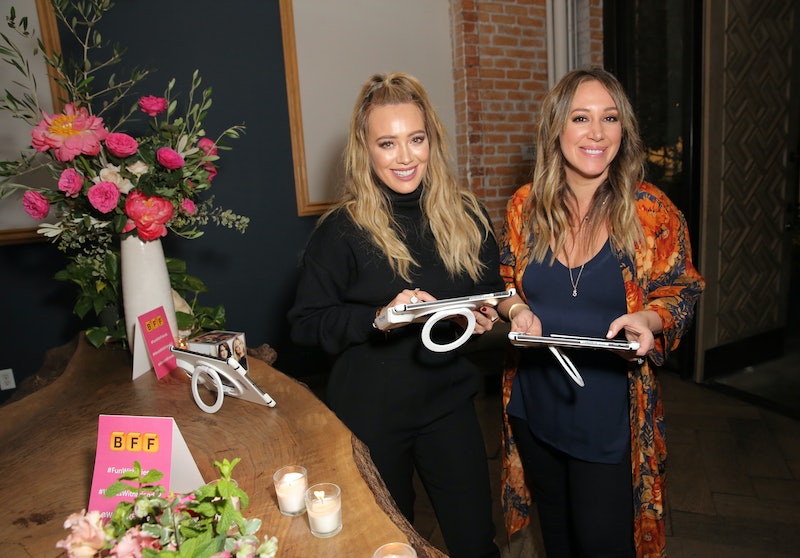 Hilary and Haylie Duff have come a long way since they were co-starring in 2006's Material Girls. These days, the two of them are still actors, but they're also moms. Hilary & Haylie Duff's photo with their daughters shows how much has changed for them, and it looks like their sisterly bond is stronger than ever.

"Thank you @sharm1222 for remembering to snap a pic of US! @hilaryduff and I always take so many pics of our kids that we never seem to be in them together," Haylie wrote in her Instagram caption. The photo is so sweet, too — it shows the two actors in a living room together, holding their baby girls. Haylie's daughter, Lulu Gray, is even reaching out to embrace her cousin Banks in the sweet pic.

It sounds like the photo was actually taken at a birthday party for Hilary's older child, her son Luca. "Yesterday we had the best evening! Celebrating the first baby to join our family- our big boy, Luca!!," Haylie wrote in her Instagram post. "I can't believe he's already so big. So proud of him!" Luca was born on March 20, 2012, so it looks like the festivities were to mark his seventh birthday.

Hilary posted a picture of Luca on his birthday, too, noting how the time has flown for her since he was born. "Luca Cruz...the star of my heart. Makes me proud everyday. 7 better look out....he has arrived ♥️ #wherehasthetimegone," the Younger star captioned the photo.

With two children each, it's understandable that the two Duff sisters have taken more photos of their kids lately than they have of themselves. Having young children has no doubt kept them super busy, but it looks like the two of them absolutely love being moms.

Plus, it seems like parenthood has only brought Hilary and Haylie closer as sisters. For example, Hilary threw Haylie's 2015 baby shower, which featured seriously cute accents, like flower crowns and mini cupcakes. (The guest list was as A-list as fans might expect, too, with Big Bang Theory actor Kaley Cuoco joining in on the fun.) Between the baby shower and all of the kids' birthday parties over the years, parenthood seems to have given them even more opportunity to spend time with each other.

The sisters' latest photos hint at how close the cousins will likely be as they get older, too. Having a relative who's so close in age can be tons of fun, and Lulu and Banks' relationship will probably only get stronger as the years go on.