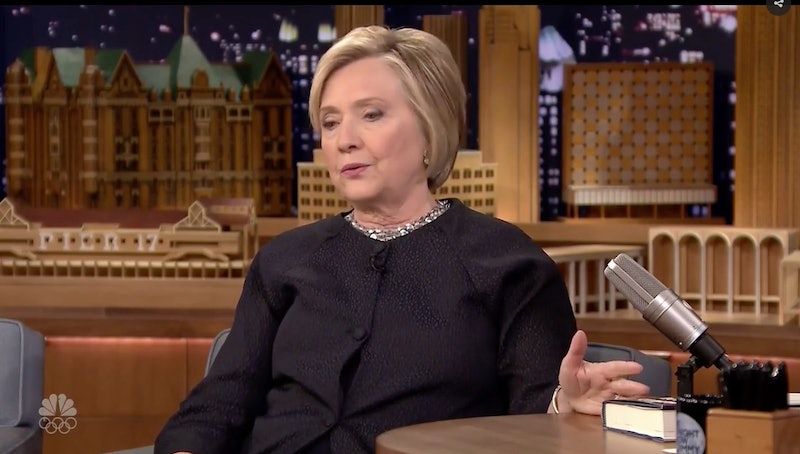 On Wednesday evening The Tonight Show with Jimmy Fallon welcomed Hillary Clinton to the stage. As always, the former Democratic presidential candidate and secretary of state refused to stay silent on the issues that truly matter to her. And after the horrific mass shooting outside of Las Vegas' Mandalay Bay resort on Sunday night, Clinton has consistently spoken out in favor of gun control laws — something the GOP as a whole has resisted for years.

In addition to talking about her newly released book on the 2016 presidential election, What Happened, Clinton blasted the Republican Party for its allegiance to pro-gun lobbyists and the NRA.

You know, I write about taking on the NRA in the election and I write about these remarkable, extraordinary people who lost loved ones — the Mothers of the Movement who lost children, the parents from Sandy Hook whose six-year-olds were murdered, the incredible Gabby Giffords and her husband Mark — because I can't believe that one whole political party in the greatest country on earth is totally sold to the gun lobby and will do whatever they are ordered to do despite the loss of life.

And the GOP's dedication to second amendment enthusiasts is no secret. At least 10 Republican congressman have received millions of dollars from the association over the course of their careers. As Clinton mentioned during her interview with Fallon, one of the first things Trump did after his inauguration was to "reverse President Obama's order that people with serious mental health problems should not be able to buy guns." Though the GOP backed his decision, its hardline stance on guns doesn't necessarily align with some of its constituents, according to Clinton.

(Clinton's comments on the NRA begin in the clip below at the 3:24 mark.)

According to Business Insider, a 2017 survey from Pew Research Center and NPR that included both gun-owners and non-gun-owners suggested that nearly 90 percent of Americans didn't want people with mental illness to be able to buy a gun. Additionally, less than 20 percent of gun-owners who took the survey said they belonged to the NRA.

And this isn't the first time since the election that Clinton has spoken out against the GOP's loyalty to the NRA. After at least 59 people were killed in Las Vegas, she tweeted, "Our grief isn't enough. We can and must put politics aside, stand up to the NRA, and work together to try to stop this from happening again."

She also tweeted, "Imagine the deaths if the shooter had a silencer, which the NRA wants to make easier to get." This tweet in particular came under fire for its accuracy, as gun rights activists criticized her for failing to provide evidence to back her claim up. Evidence or no evidence, however, her point was clear — gun control needs to happen.

Clinton might be done with public office for now, but that doesn't mean she's going to stand in the background.

You know, this book tour is of course something that i am really glad to be doing. But I find my interactions with literally now the thousands of people that I've shaken hands with, that I've signed a book for, that I've spoken with at an event, to be so reinforcing. And I am going to keep speaking out. I've got the freedom to do that. I'm not running for anything. I can talk about what is at stake and different decisions that are being made.

On Wednesday, she assured Fallon that she will continue to stand her ground. And her fans would expect nothing less.