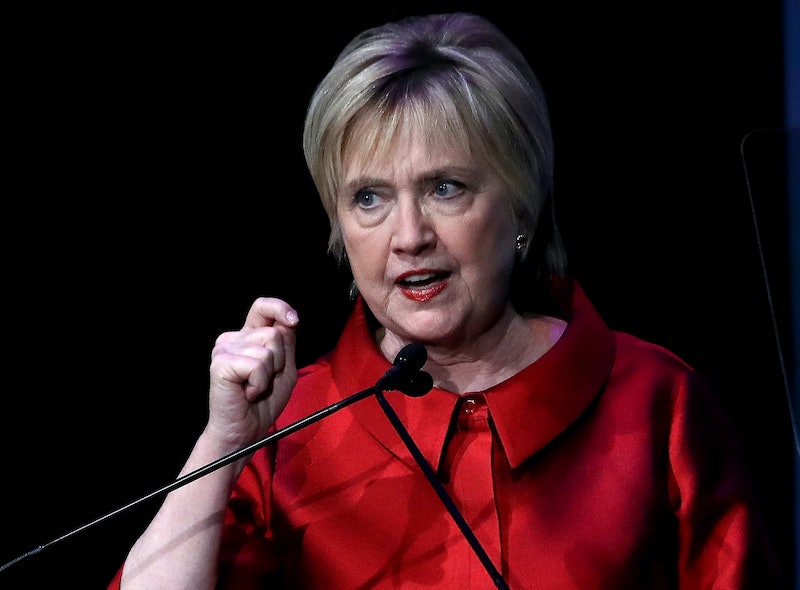 When a woman changes her hair, should the general public comment? That probably depends on an array of factors, a few of which will be addressed in this piece. But first, a more pragmatic question: If a prominent woman changes her hair, will the public notice? I think on that question, everyone can agree that the answer is yes. And after Secretary Hillary Clinton posted a Snapchat video of herself on Thursday, sporting a new cut with bangs, the internet definitely had a lot to say about her new do. There were plenty of reactions to Clinton's new look; the amount of commentary in response to those reactions may even outnumber the original observations.

Clinton has long joked about her hair, accepting — and perhaps even using — the inevitable attention it garners for political benefit. "If I want to knock a story off the front page, I just change my hairstyle," she once famously declared.

Unlike activists or idealists, politicians have to maneuver in the world of reality, a fact Clinton probably understands better than most. Decades in the public eye have a way of doing that — forcing a person to deal with the world as it is, rather than as it should be.

From media freak-outs over Ted Cruz's weight, Sarah Palin's shoes, or even Justin Trudeau's physique, there's no shortage of judgment for appearance online. And the same goes for pontificating via tweet or post on Clinton's latest change to her hairstyle.

When it comes to judging politicians, this is not ideal. After all, we're not electing public servants so they can school us on all the hippest fashion trends. Purportedly, we're voting based on what policies they espouse and their ability to actually push those campaign promises through the political process and into reality. Ergo, headlines concerning government figures should focus on their ideas, their integrity, their record, their public statements, and their actions. Notably not listed: designer heels, daily workout, favorite handbag, latest hairstyle.

At the same time, voters are not just civic automatons; they're human. As such, no one can reasonably expect to go around not noticing major physical attributes — including hairstyle changes. Any savvy politician knows that, including Clinton. I'll repeat here that she herself has observed that altering her hair can change the news trajectory. Might we at least give Clinton some credit for knowing what she was doing?

For example, the above Twitter Moment has been criticized for focusing on Clinton's appearance with the breathless "All eyes on Hillary Clinton's new haircut!" (Sure, that reads a bit on the dramatic side.) And absolutely last in line, the caption mentions her "powerful message." But what if Clinton had kept her regular hairstyle and given her speech on International Women's Day looking exactly as she did throughout the campaign season? My guess is that her message would have received far less fanfare.

Of course, in a perfect world, a female politician wouldn't need to rely on appearance to get attention for her ideas. But Clinton's a realist, and this is one real way to get above the daily noise of 24/7 news.

I admit to being a big fan of realism myself, at least when it comes to moving the ball forward politically. If you have an idea or a policy, and you want it implemented because you believe in it, then a certain amount of accepting the world as it is will be indispensable. Honestly, that's my opinion. Using a new haircut to grab headlines seems like a pretty smart way to bring a brighter spotlight to one's message.

But that's not to say this is the world we want, the world as we'd like it to be. I wish we had a culture that insisted on listening to the words and judging the actions of politicians, ignoring everything else. Until then, is it OK to talk about Hillary Clinton's hair? Well, to the extent it gets us talking about her policies, whether we agree or disagree with them, I'd say yes.