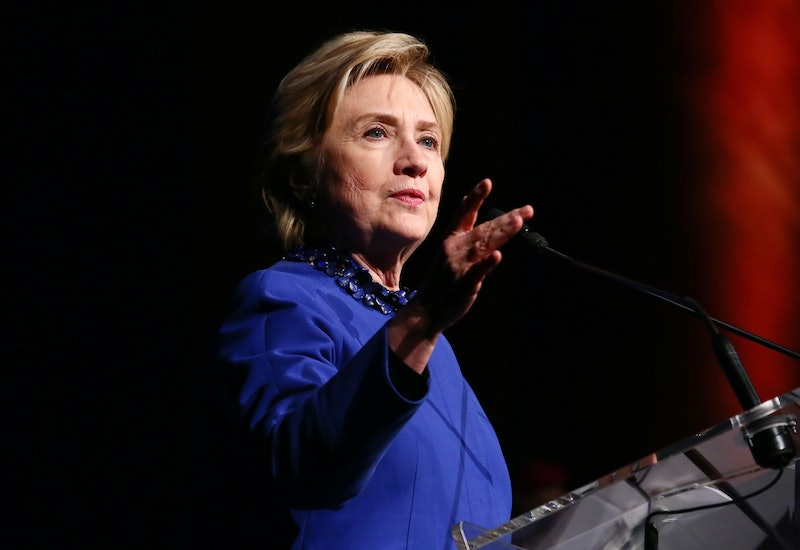 The early hours of Wednesday morning found Donald Trump in a familiar place: on Twitter, looking for something to say. He went with "Despite the constant negative press covfefe," and for the roughly six hours that this tweet remained online before being deleted, Twitter users tried to figure out what Trump was talking about. Merriam-Webster didn't even try defining the word, but former Secretary of State Hillary Clinton suggested Russians would understand the "covfefe" tweet.

White House Press Secretary Sean Spicer made a laughable but rather confusing choice when he argued that the tweet was intentional, insisting at his Wednesday press briefing that "the president and a small group of people know exactly what he meant" by the now-deleted tweet. Clinton's jab at the president's tweet, meanwhile, was certainly intended as a joke, but it led to a more serious discussion of the Trump campaign's alleged ties to Russia.

At a Q&A session during Recode Media's Code Conference on Wednesday, Clinton joked that Trump's "covfefe" tweet "was a hidden message to the Russians." Later, in response to Spicer's comments during his daily press briefing, Clinton went one step further.

"Ah, the small group explanation," she told the audience during the Q&A. "You don’t have a high enough classification to know what 'covfefe' means."

It's obvious to almost everyone — except Spicer, apparently — that "covfefe" is probably just a typo for "coverage." But the idea that something as mundane as a made-up word could result in comments about security clearance levels should worry us. Moreover, Clinton's joke is a particularly intentional allusion to reports of Russian interference in the election that she lost back in November.

Although Clinton started out her discussion of the "covfefe" tweet in a lighthearted manner, it quickly became clear that she believes something more serious is at stake. Toward the end of the interview, Clinton warned against letting ridiculous tweets distract us from real issues.

"It's to avert attention," Clinton said. "It's like covfefe. Trending! Worldwide! Maybe for a minute you'll forget the latest accusation about them transpiring with Russia. It's the circus, right? It's what a classic authoritarian does."

Clinton is right that things like "covfefe" aim to serve as distractions. At this very moment, the Trump administration is drafting regulations to limit birth control access and preparing to withdraw the United States from the Paris climate agreement.

Trump already tried to maintain this particular distraction by asking his followers what they thought "covfefe" really meant, and headlines about this nonsensical word are everywhere. Jokes and memes are useful in that they provide some relief from the catastrophic news that seems to emerge on a daily basis under the Trump administration, but Clinton's warning is an important reminder that they are not enough.