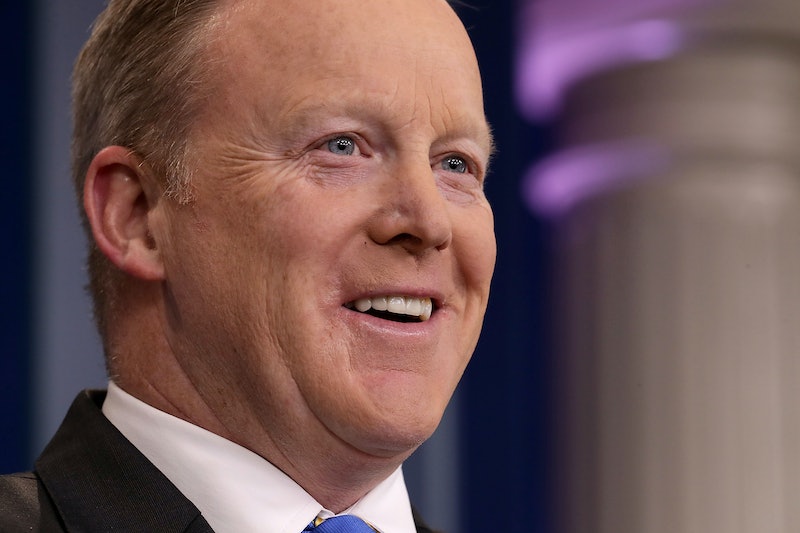 If you were hoping for some explanation from the White House Press Secretary about the "covfefe" kerfuffle from Tuesday night, you'll be disappointed. Far from a clarification about President Trump's mysterious tweet, Sean Spicer stoked the "covfefe" conspiracy theories at his press briefing on Wednesday by coyly saying that he thought "the president and a small group of people knew exactly what he meant."

This was actually kind of the expected response, which made it all the more hilarious and terrifying. Jokes about Spicer's response to Trump's "covfefe" tweet abounded on social media, all revolving around the basic principle that Spicer would somehow defend the tweet by claiming that its meaning should have been obvious. "The president's tweet speaks for itself" is a line we've heard repeatedly from Spicer, in far more serious situations than this. Did he really need to imply that now, when it was clear to anyone with half a brain that "covfefe" was a typo of "coverage" and the rest of the sentence was left out? In this case, objectively, the president's tweet did not speak for itself.

Even Trump himself — for whom humor isn't exactly a strong suit — played along with the joke, tweeting "Who can figure out the true meaning of "covfefe" ??? Enjoy!" after he had deleted the original tweet. I'm not saying it was funny, but at least he took a stab at it.

The press briefing today was off-camera, so we can only guess at what Spicer's facial expression was when he answered the "covfefe" question. The audio recording of the answer doesn't make it sound like he was joking, although you can hear all the reporters start laughing afterwards anyway. Through the laughter, though, you can hear that they're also trying to ask questions about what the president meant by "covfefe," with each voice pronouncing the word differently. It seems unlikely that a sarcastic remark would have prompted that, but, hey, far unlikelier things than that have happened in the past year.

It really would have been an excellent joke, if he did mean it as such. Spicer is said to have a sense of humor, rare though that may be in Trump's orbit. Why not break it out at this moment, after the incoherent tweet launched Twitter into an hours-long fit of delirium?

Before we launch off into the world on conspiracy theories and endless wondering, let us consider one more possibility, a world in which things weren't so confusing: Exhausted by Trump's incomprehensible ways, Spicer, like the rest of the country, simply does not know what's happening.