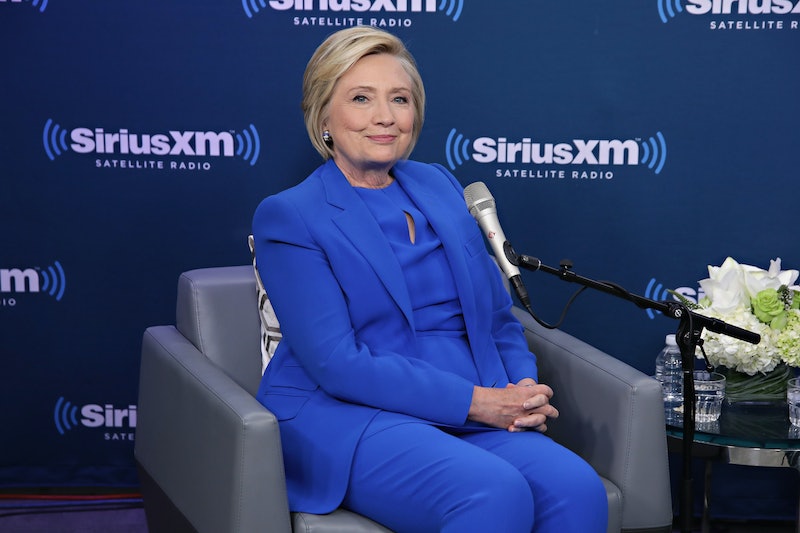 During her historic presidential campaign in 2016, Hillary Clinton's pantsuits were a hot topic among the public. The Democratic nominee's campaign trail attire eventually came to symbolize much more than a style choice, with her supporters wearing pantsuits on Election Day in a show of support. Through no fault of her own, coverage of Clinton's fashion choices sometimes took attention away from the issues she was addressing. But that isn't the only way beauty and fashion impacted Clinton's campaign run.

In her memoir What Happened, Clinton broke down how many hours she spent having her hair and makeup done while running for the highest government office. Clinton uses this detail, which she tallied mathematically, to reminds us all of the beauty standards women in politics (and women in general) are expected to adhere to.

As Refinery 29 points out, Clinton wrote, "I've never gotten used to how much effort it takes just to be a woman in the public eye. I once calculated how many hours I spent having my hair and makeup done during the campaign. It came to about 600 hours, or 25 days."

The figures certainly "shocked" the former First Lady, who admitted she "checked the math twice" to be sure she got it right.

To put it in perspective, Refinery 29 nodded to a study that indicates that most women spend about 335 hours in front of a mirror per year.

For even further reference, The New York Times reported that former presidential nominee John McCain paid $55,000 for a fashion stylist for vice presidential nominee Sarah Palin back in 2008. There were also reports that Palin's hairstylist and makeup artist were paid around $110,000 over a two-month period.

Ultimately, Clinton's 600 hours in hair and makeup is certainly an intense sum, as are Palin's expenses. Each offers an idea of how much pressure and scrutiny women in politics are under to look polished at all times.

While there is nothing wrong with independently deciding to prioritize hair and makeup, the patriarchal political system inarguably puts pressure on women to fit a certain beauty standard in order to succeed. As Clinton says in her book, way too much emphasis is placed on how women in politics look and not enough on the initiatives, issues, and directions they are working on.

While 25 days is a lot of time to spend being prepped, primped, and primed to face the public, Clinton says she was a multi-tasker, using her time in the makeup chair wisely. As Refinery 29 reports, Clinton wrote that she would go over briefings, schedule staff calls, plot campaign strategies, and discuss policies while in hair and makeup.

Clinton acknowledged that her male counterparts didn't have to spend as much time in front of a mirror, a fact that didn't sit well with her. She wrote, "I'm not jealous of my male colleagues often, but I am when it comes to how they can just shower, shave, put on a suit, and be ready to go. The few times I've gone out in public without makeup, it's made the news."

Clinton hit on a crucial point there. Any time a celeb appears makeup-free in public, their look becomes a pop culture conversation. It is yet another indicator of the makeup yardstick by which all women are measured, especially those in the public eye.

But Clinton remains optimistic that there will be an eventual shift where women won't be evaluated on whether or not they put on lipstick and foundation that morning. But we're not there yet.

"I sigh, and keep getting back in that chair, and dream of a future in which women in the public eye don't need to wear makeup if they don't want to, and no one cares either way," she writes.