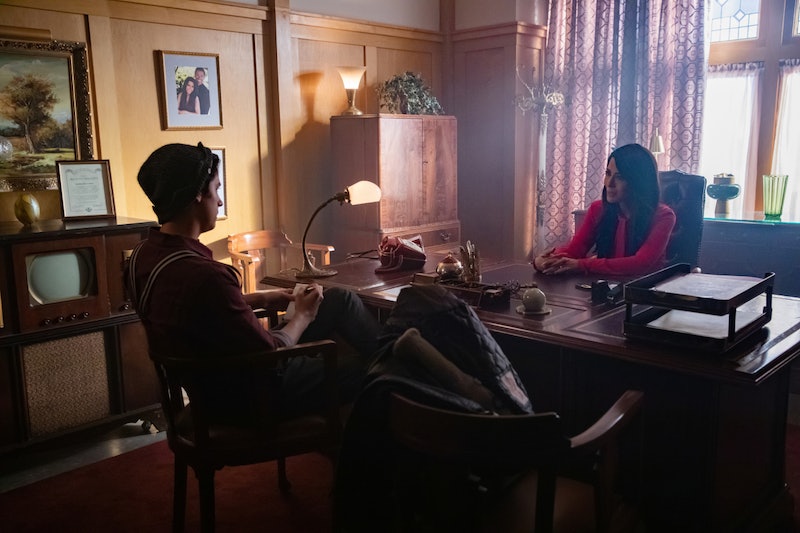 Although it wasn't a season finale, this installment of the CW drama was all about tying up loose ends. For one, we learned that Hiram has been seeing a Health and Sanitation Inspector (played by Mark Consuelos's real wife, Kelly Ripa) named Mrs. Mulwray. In exchange for money, Mulwray covered up evidence proving that the Sweetwater River was contaminated.

Remember how a bunch of girls randomly had seizures, including Betty, Veronica, and nearly all of the Vixens? Apparently, this was due to run-off from Fizzle Rocks, which Hiram and Claudius Blossom had been dumping into the water. While this doesn't explain why only girls were affected, it does eliminate any creepy mind-control stuff involving the farm (a.k.a., that baby-levitation scene from the Season 3 premiere).

We also learn that both Hiram and Claudius had been making the drug both in the prison as well as the Blossom's old maple factory. When Veronica confronts her mom about her complicity in the scheme, Mrs. Lodge explains that she found out about the Fizzle Rocks operation and ordered her husband to shut it down. This explains the Riverdale quarantine — a diversion which allowed them to cease production without anyone noticing. Except Hiram didn't actually shut it down, Hermione explains, and instead consolidated everything at the prison. However, that does mean that they're further away from the water supply, which could be good news for the town.

That Riverdale's water supply was compromised confirms a theory that Reddit user dcfb236016 had after the Season 3 premiere. When Bughead and Varchie go swimming in the Sweetwater River, there's a sign that says, "Caution: No swimming after Labor Day," which would imply that that's when Hiram and Claudius started dumping the Fizzle Rocks.

However, it's revealed that Hermione has been keeping some secrets of her own. Not only is Sheriff Minetta alive (well, at least at the beginning of the episode), but he's been shacking up with the Riverdale mayor somewhere up north. And this isn't the first time Mrs. Lodge has stepped out on her husband — remember her tryst with Fred Andrews while Hiram was still in prison? It's clear that all is not well in Lodge Land, since Hermione put a hit on her husband — not once, but twice.

While her motivations aren still a little fuzzy, Hermione spells it all out for Jughead (who considers himself a gumshoe after Veronica hires him). When Hiram enlisted Tall Boy to open fire at the mayoral debate, she explains, he put her life in danger, too. What's more, his daughter had a seizure because of his own product, and that is simply unforgivable. So how did Hermione plan on paying Hiram back tit for tat? First, she had FP shoot her husband (giving him the sheriff job as payment), and when Hiram didn't die, Mrs. Lodge had her boy toy go and finish the job in his hospital room. But what Sheriff Minetta wasn't accounting for was Archie, who'd come to off Mr. Lodge himself, instead shooting the police officer in the arm.

Then there's the Fizzle Rocks operation itself, which Hermione had planned to sell to an unknown buyer — drugs and all. But when Ronnie and Reggie burn the entire stash, the Riverdale mayor is furious. After all, she'd used the money to pay off Governor Dooley for the quarantine, and the buyers are expecting a complete product. So while it's unclear what's going to happen with the sale, Veronica's put her mother in some seriously hot water.

So what does all of this mean for the rest of the season — or even series? For one, we know that Hermione has a longer game plan. And while it's not clear what that entails at this point, it seems that she's gunning for more power than her job as mayor can provide. As for Hiram, the crime boss' scheme to corrupt the town with Fizzle Rocks, a red light district, and Griffins and Gargoyles have been well-documented (we've seen his handiwork in the nearby Athens). But that he's been bribing people in the government and creating false reports may spell trouble for him in the future (not to mention his wife, who holds an elected office). That said, now that Hiram and Archie have come to an understanding (Red did save his life, after all), this may mean that Veronica and her ex-boyfriend (or "lover," if you will) may be at odds, too, considering her fraught relationship with her father.

Finally, just because Hiram's murder didn't go as planned, it's doubtful that Hermione is going to give up so easily. And now that she's killed Sheriff Minetta, the only people who know about her misdeeds are Sweet Pea and the two Jones men, and she's blackmailed both Jug and FP into silence. Because, as Jughead so hilariously says, "No one's innocent in crime town."