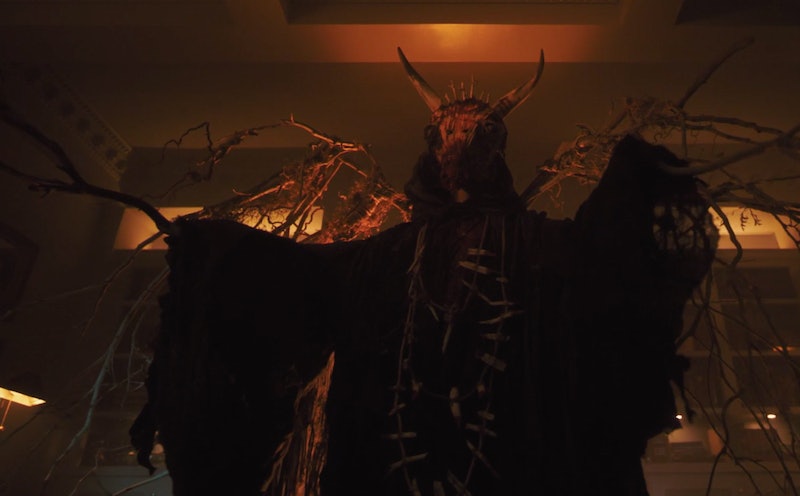 Spoilers ahead for Riverdale Season 3, Episode 10. One of the best parts of watching Riverdale is trying to figure out the identity of each season's Big Bad, but this time around, it all felt very anticlimactic. Not only was The Gargoyle King revealed to be Tall Boy (Scott McNeil), a minor character, but he hasn't been seen around town for quite a while.

There have been many theories about the Gargoyle King's true identity, including Hiram Lodge, Hermione Lodge, Claudius, or even the hapless Ethel Muggs. And while Tall Boy is certainly an unexpected choice, that doesn't make it very satisfying. Is it possible Tall Boy isn't really the Gargoyle King, and this is just one of the show's many red herrings? There's several episodes left in Season 3, so how will they continue the Gargoyle narrative — if at all?

As a bit of a refresher, Tall Boy is a member of the Southside Serpents. He used to be close with FP and a mentor to Jughead, but then he was corrupted by Hiram Lodge. He later disguised himself as the Black Hood (not the real one, obviously) and shot Fred Andrews at his house (not the shooting at Pop's), who was wearing a bullet-proof vest. He also decapitated the General Pickens statue and betrayed FP and Jughead by trying to get them thrown out of the gang. And for all that, FP exiled him.

So when Jughead and the Serpents corner the Gargoyle Gang and unmask their leader, they're clearly surprised by who they find beneath the extravagant costume. They were under the impression that he was dead, but here Tall Boy is — very much alive! After being taken hostage, he explains that he's been hiding out in Athens, which Archie and Jughead briefly passed through when they skipped town. Not only does Tall Boy admit to terrorizing Alice and Betty at their house, but he also cops to murdering Joaquin and carving that symbol into his forehead.

In some ways, however, Tall Boy being the Gargoyle King makes sense. For one, Tall Boy's got that ominous voice that you need to be a truly convincing villain. And, at the risk of being obvious, he is very tall. It makes sense that the Gargoyle King isn't really Evelyn walking around the forest on stilts. Then there's the fact that he's already got a rap sheet. But really? Tall Boy?! For one, we find out he's the Gargoyle King halfway through the episode, so the excitement has died down by the time the credits roll. And even so, fans were likely hoping for someone a little more...involved in the story.

However, despite the fact that FP and the Serpents have the real Gargoyle King in custody, they still can't trick the Man in Black into meeting them. It actually works out in their favor, though: Hiram sends Claudius in his place, only to be shot by somebody himself, so a mystery is still afoot.

Meanwhile, Sweet Pea and Fangs Fogarty kill Tall Boy in a panic. So whatever this Gargoyle King reveal means for the rest of Season 3, Hiram is down a kingpin and off his game. Perhaps soon, the Gargoyle King won't be the only one whose empire has fallen.