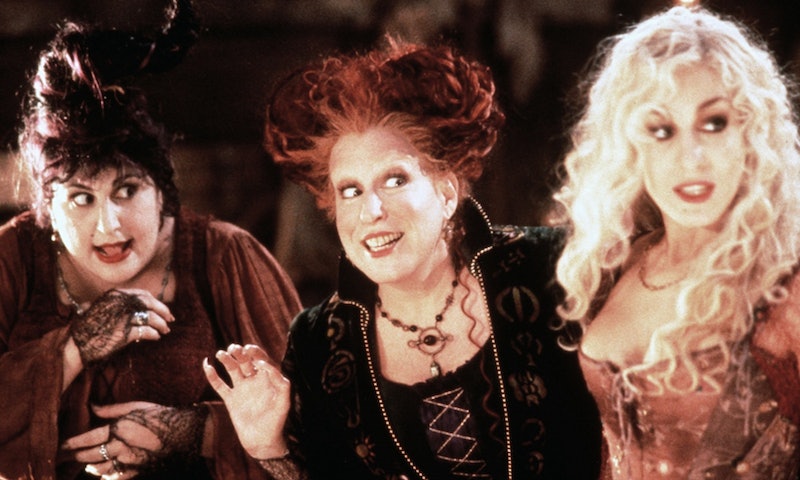 The film has managed to remain a favorite for 25 years now, but in a recent interview with Hocus Pocus stars Bette Midler, Sarah Jessica Parker, and Kathy Najimi, Hocus Pocus wasn't always a success. The trio of witchy stars loved the project from the beginning, of course, but according to a recent interview, they were almost its only fans. Midler, Parker, and Najimi elaborated during The Hocus Pocus 25th Anniversary Halloween Bash, which aired on Freeform on Saturday, Oct. 20.

Midler, Parker, and Najimi played Winifred, Sarah, and Mary Sanderson, respectively, and throughout the silver anniversary celebration, all three had surprising, behind-the-scenes details to share about the cult classic. Like, for example, that Hocus Pocus originally premiered to such disappointing numbers — it made just $8 million in its opening weekend, after costing a reported $28 million to make — that the entire cast is shocked fans are still watching it. "I don’t think any of us who were making it at the time thought Hocus Pocus would have such a long life,” Parker shared. She also joked that she would hardly have struggled to understand why it might have failed, given the darkness of the subject matter.

"I guess what I remember most is how awful we were as characters. I was surprised that the goal was to get a child and basically destroy them, but because it was done in a really heightened, ridiculous way, it was a lot of fun."

Well sure, when you put it like that, it's a straight-up miracle that fans are still watching this gem two-and-a-half decades later. But that just speaks to the quality and campiness of the acting, because Midler, Parker, and Najimi brought it hard, and their performances very much hold up.

And after watching this special, it's clear that one of the reasons they've weathered the years so well is not because of how many children they've consumed, but because of how much fun was had on set. Midler revealed that there was never a doubt in her mind that she wanted to be a part of the project, telling fans:

“I read the script of Hocus Pocus and I was very intrigued by it because it was an opportunity to do things that I really loved to do, which is play physical comedy and be more than a little broad.”

And the last thing that made the film worthwhile? The flying. It feels like it's often the case that you'll hear after a film's release how uncomfortable the stunts were to execute, but not so here. All three actors said that swooping around on broomsticks was their favorite part of the whole feature, with Midler calling it “one of the greatest joys I’ve ever experienced as an actor." Not to be outdone, Parker added, "I’m going to go out on a broom, and say I enjoyed it more than anybody.”

According to Najimi, the three of them would just sort of be chilling in their very comfortable flying harnesses, waiting for the next stunt: "We would just be hanging up there sometimes for hours until they would swoop us and the faster the better, I absolutely loved it." That joy and excitement came through onscreen, and this whole interview makes it crystal clear that it was Midler, Parker, and Najimi's enthusiasm that helped turn Hocus Pocus into the cult classic that it remains today. The film has repeated showings on Freeform all month long, so here's to 25 more years of the Sanderson Sisters! Long may they reign!