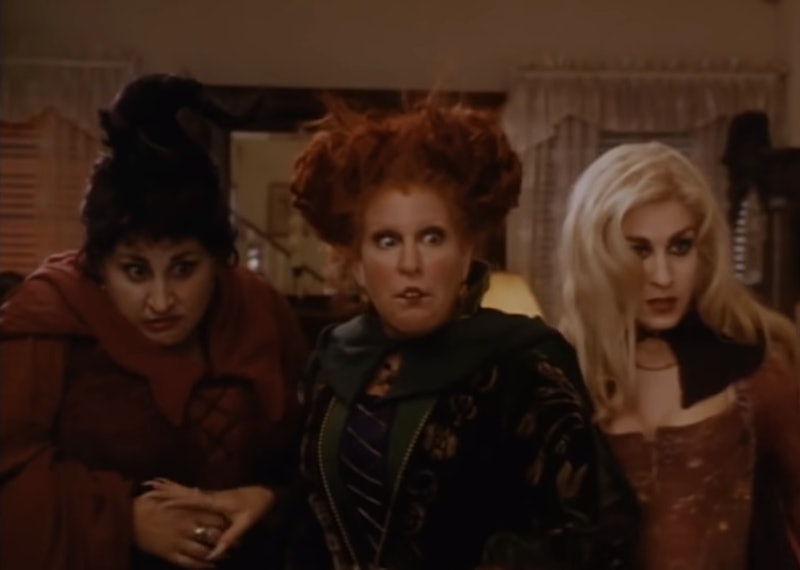 Good news, Hocus Pocus fans, you won't have to wait three centuries to see the original Sanderson sisters together again! Bette Midler officially joined Freeform's Hocus Pocus reunion special, as reported by People. The 25th anniversary special was first announced in Sept., but at the time, only Sarah Jessica Parker, Kathy Najimy, and Thora Birch were confirmed. Now, Midler has revealed via a special video for Freeform that she won't be missing the chance to reunite with her onscreen coven.

Using her best Winifred voice, Midler says in the video: "Wait, wait a minute! What's a Sanderson sister celebration without Winifred?" Then, in what's sure to be a delight to fans of the movie, she offers up one of Winifred's classic wide-eyed looks. It's perfection, and there's no doubt going to be more where that came from when Freeform airs the special on Saturday, Oct. 20, at 8:15pm EST.

In addition the iconic actors who brought the Sanderson sisters to life, the special will also feature appearances and interviews from the rest of the cast, including Birch, Omri Katz, Vinessa Shaw, Sean Murray, Amanda Shepherd, Doug Jones, Larry Bagby, Jason Marsden, and Tobias Jelinek. The film's director, Kenny Ortega, and writers, Mick Garris and David Kirschner, will also be on hand for the two-hour event.

Since its release 25 years ago, Hocus Pocus has become a Halloween classic, and a large part of its appeal comes from the deliciously campy performances from Midler, Parker, and Najimy. The Sanderson sisters are a key part of the film's success, and any reunion wouldn't be the same without them. Thankfully, fans will get to see the sisters reunited at least. And while a sequel would be nice, this is the next best thing.

It sounds like Freeform has crafted a memorable night that will be made all the better by the inclusion of Midler. The Broadway star expressed her gratitude for the the film during an August interview with Good Morning America. She said of the film's success,

"We had no expectations because we didn't get very good notices and we didn't do the business that anyone expected us to do. And the fact that it became this cult favorite and that it plays regularly every Halloween, I mean, I have very young fans because of Winnie, because of Hocus Pocus, so I'm grateful for it."

Midler is less excited about the Disney Channel's planned TV remake without the original cast. But her presence at the reunion seems to prove that no matter what Disney does with the franchise in the future, she'll always be game for keeping Winifred's spirit alive.

More like this
David Schwimmer Doesn't Remember This Classic 'Friends' Episode
By Sam Ramsden
The 'Hocus Pocus' Sequel Finally Has A Release Date & It Makes Total Sense
By Shannon Barbour and Radhika Menon
Hayden Panettiere Will Return For 'Scream 6': "We F*cking Won, Scream Fam"
By Jack Irvin and Jake Viswanath
A 'Bridgerton' Star Just Dropped A Major Hint About Joining The Live-Action Barbie Cast
By Bustle UK
Get Even More From Bustle — Sign Up For The Newsletter