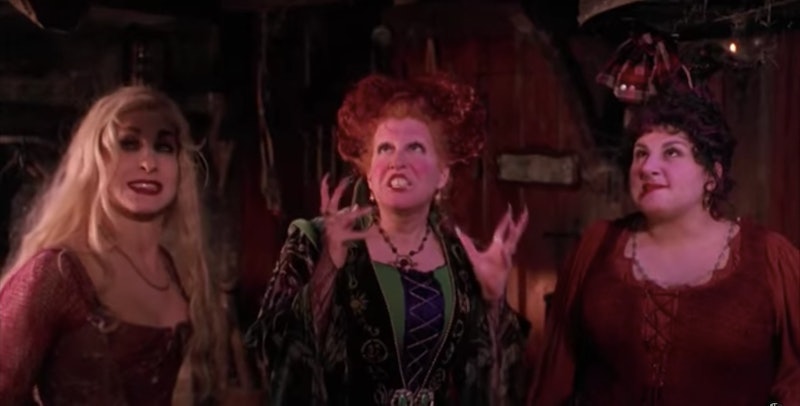 It's hard to believe that a quotable, cult classic was originally different in any way, shape, or form. Especially this Halloween favorite, which is perfection in all of its nostalgic glory, even 25 years after it was released. But believe it or not, Hocus Pocus was originally an entirely different film, according to its star Kathy Najimy. Najimy, who was notoriously one in the trio of pop culture's favorite witches, recently explained how the film was originally much more witch-centric and perhaps a bit less kid-friendly.

While celebrating the film's 25th anniversary at a screening in Brooklyn, Najimy explained to SyFy Wire what the film was initially like. "It was cut and edited completely differently than it was filmed," she revealed. "It was really more about the witches and less about the kids." So what made the film, also starring Bette Midler and Sarah Jessica Parker, change its course?

According to the actor, it was Disney's call to make the film more "kid-friendly." Hocus Pocus, of course, ultimately became focused on a group of kids trying to defeat the witches and their evil intentions of sucking youthful souls to stay younger.

Najimy further recalled five "huge" scenes with the Sanderson sisters that didn't make the movie. One of the scenes was a sequence in a grocery store, and a part of it can be seen in the trailer below, from the 15 to 19-second marks.

"That was a good one. That was so fun," the actor recalled. "In it, Mary got to be set loose in a supermarket so when she saw like toilet paper with a baby's face on it!"

In the movie-making process, Najimy was super invested in how the Sanderson sisters were portrayed, perhaps because of her deep tie to witches. "I really believe in white witches," Najimy reportedly told the crowd. "And I'm a witch and a lot of women I know who are very spiritually forward are witches." She recalled being worried about how the Sanderson sisters' portrayal of being obsessed with killing children would create a negative, harmful stereotype. Thus, Najimy said she approached writers to include mentions of "white witches," or "good" witches, such as Allison (Vinessa Shaw).

In addition to helping mold the film's portrayal of witches, Najimy also reportedly influenced her character Mary's iconic characteristics like her wild up do and crooked mouth. "I said how about if her wig is the top of a pumpkin? Like the stem," she recalled. Further, her silly smile was something she came up with while rehearsing. "One day in rehearsal I just sort of went to the side," she explained. "And we decided she was a like bloodhound, so this sort of sniffy thing sort of happened."

Fans of the cult classic may still be holding out for another installment, since a Hocus Pocus TV movie was announced last September. According to Deadline, the re-imagination of the original would have a new cast and director. Further, the anniversary book Hocus Pocus and the All-New Sequel was released on Hocus Pocus' 25th birthday this year. The sequel continues the story with Salem's next generation of teens, including Max and Allison's 17-year-old Poppy, who has her own encounter with the Sanderson sisters.

But what's Najimy's take on reviving the story for the screen? "None of us are in control of it. People keep saying. 'Please do a sequel,' and we're like we're on with our lives into other projects and stuff," she said. "But if someone wants to make an offer and we happen to be available or wanna do it, well then there's that."

But most loyal Hocus Pocus fans probably wouldn't care if the film was left alone. After all, it's a classic for a reason.