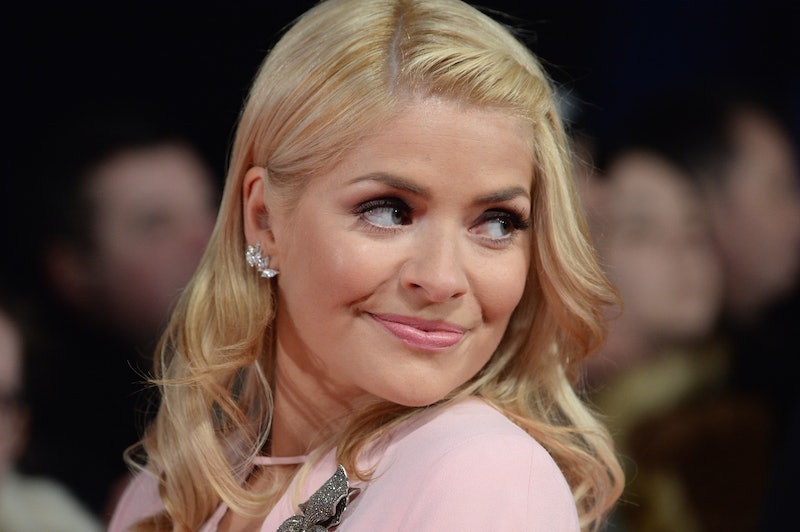 Having spent a few weeks living her actual worst nightmare — Holly Willoughby's not a big fan of creepy crawlies, if you didn't know — you can't blame her for wanting to treat herself after. She must have picked up a big pay cheque, as her ride home was extra flashy. I'm not just talking extra pillows and Wi-Fi in the sky flashy, I'm talking about an actual flying pent house flashy. Now, as she prepares to fly home from the I'm A Celeb camp in Australia, it's been reported that I'm A Celebrity's Holly Willoughby's flight back from Australia cost her a whopping £19,000.

What better way to shower off all that jungle funk than in a shower on one of the world's most expensive flights? That was Willoughby's smart idea, the Daily Mail reported on Wednesday, Dec. 12. She's reportedly set to board what Etihad Airways dub their "penthouse in the sky." Travel + Leisure have said that it's "more akin to a boutique hotel room than an airplane seat." Bustle reached out to Holly's representative to confirm the reports but did not receive a response at time of publishing.

So, what exactly can Willoughby look forward to on her plush flight home? According to Travel + Leisure, her private flight back houses its own living room, fitted with leather sofas from Ferrari's suppliers. It's also got two large bathrooms, as well as Willoughby's own butler service.

She'll get to catch up on all the telly she's missed in any of the plane's multiple — and very necessary — TVs. There's one big one in the living room, and in another in the bedroom which boasts the world's first on flight double bed, as well as designer Italian bed linen, according to the Daily Mail. The suite reportedly sells out weeks in advance, so Willoughby must have had her eyes set on this one for a while.

The celebs themselves were similarly spoiled after they left the jungle. According to The Mirror, Harry Redknapp and the 10 other contestants revived at the swanky sounding Palazzo Vercase Hotel, before boarding first class flights home. It's not bad for some. You'll get to see all of the adorable reunions with their families who had been waiting back home on I’m A Celebrity: The Coming Out Show 2018, which airs on Wednesday, Dec. 12 at 9 p.m. on ITV1.

According to the Daily Mail, the contestants, as well as presenter Declan Donnelly along with his wife and kids, made it back to London Heathrow on the morning of the reunion show's airing. That's not a lot of time to shrug off the jet lag before the viewing party. Although, I imagine from the looks of those first-class flights — John Barrowman posted some snaps alongside his hubby on their flight home to Insta — that they all got some pretty decent kip.

So, will that expensive flight home be enough to tempt Willoughby into returning to the jungle next year? As nice as it looked, Bustle reported back in November that Willoughby just considered this presenting job a one off, at least until Ant returns. Still, I'm feeling hopeful that she'll board another extra AF flight alongside Ant and Dec, for a three way presenting job next year.