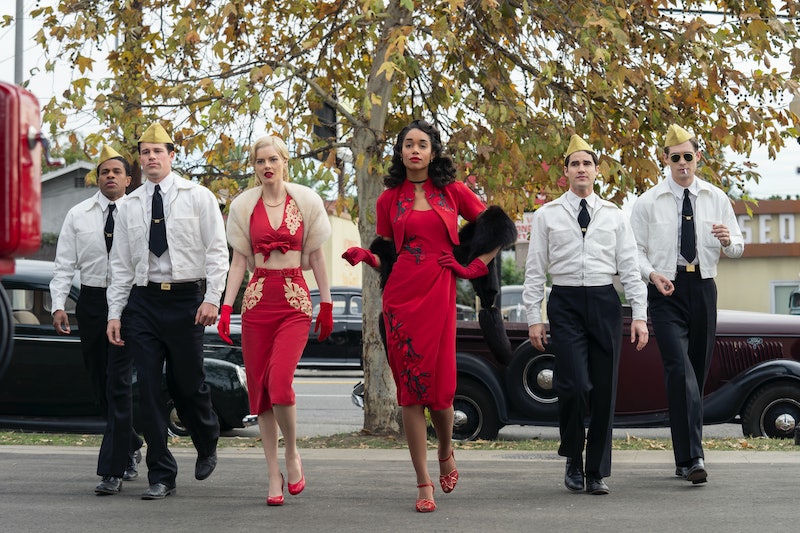 On Friday, the first season of Ryan Murphy’s new 10-episode series Hollywood debuted in binge-worthy fashion on Netflix. The show is a period drama that rewrites the history of Tinseltown, starring luminaries like Darren Criss, Pattie LuPone, Holland Taylor, Jim Parsons, and Laura Herrier. Upon watching over the weekend, style enthusiasts were thrilled to discover that, just like the storyline, the costumes are inspired by the glitz and glamour of 1940s Hollywood.

Some of the prominent '40s trends Eyrich brought to life onscreen include "women’s hats, turbans, and snoods," and "men’s dapper suits with fresh flower on the lapel," he tells Bustle. The accessories — hats, brooches, tie bars and belts — were paramount to creating a look authentic to the time period of 1947 to 1949. "Figuring out how to make [them] look right was a super fun challenge," Evelyn adds.

To ensure the costumes looked believable, the costume designers did extensive research. "Sarah literally papered every inch of every wall with photos from the era," reveals Eyrich. "We were so inspired by the images." Some photos were the exact inspiration for the costumes you now see onscreen. "A couple of Holland Taylor’s costumes were directly inspired by pictures of her mom from the 1940s," Evelyn shares.

To source the costumes, Evelyn and Eyrich did a ton of vintage shopping, both "across the globe" and through "LA rental houses," Eyrich explains. "We had a phenomenal tailor and team that created many costumes — most of Patti Lupone and Holland Taylor’s costumes were custom made." In some cases, the cast borrowed items from their own family members, giving them a dose of authenticity but also sentimental value. "David Corenswets’ grandpa's personal fedora from the 1940s made it into Jack's costume for the last scene," says Evelyn.

Though the pieces look and feel authentically '40s, the Hollywood costume designers did take a few liberties when it comes to interpreting the style of the era. Though "we wanted to stay true as much as possible, the limit we pushed was the color palette," Eyrich admits. "Mixing colors that weren’t traditionally worn together." The final episode at the Oscars, for example, features "gorgeous pastel gowns and dapper cream tuxedos for the men," after "Ryan asked for a sea of pastels and creams," says Eyrich.

The colors serve another purpose. Besides being beautiful to look at, they're directly tied to the plotline. "We did consider what outfit seemed right for the scene: strong bold choices for bolder moments and vice versa," Evelyn says, adding: "The color palette allowed us to really stretch our wings when it came to considering what clothing might say in the set."

More like this
This 'One Tree Hill' Wardrobe Error Is Going Viral On TikTok
By Brad Witter
15 Of Carrie Bradshaw’s Best Handbags From Sex & The City
By Dominique Norman
'Emily In Paris' Lucien Laviscount & Lucas Bravo Owned Paris Fashion Week
By El Hunt
Ashton Kutcher Wants Danny Masterson “To Be Found Innocent” In Rape Retrial
By Jake Viswanath
Get Even More From Bustle — Sign Up For The Newsletter
From hair trends to relationship advice, our daily newsletter has everything you need to sound like a person who’s on TikTok, even if you aren’t.