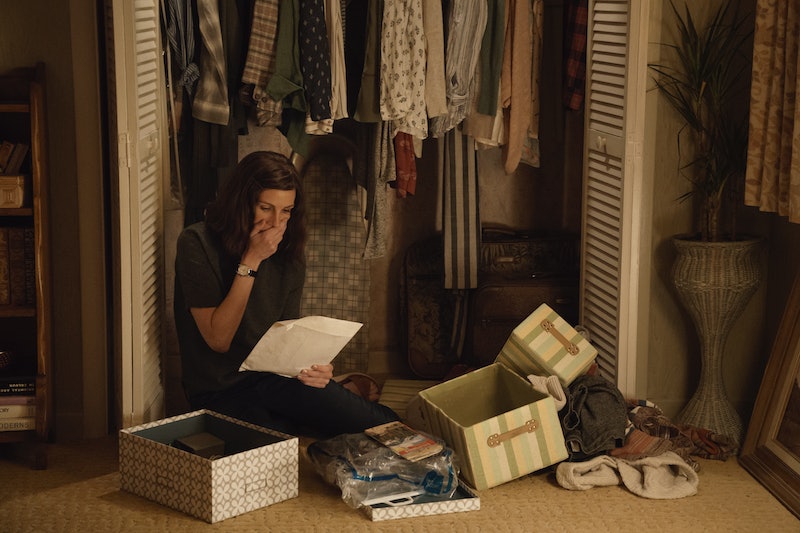 There are two versions of Heidi Bergman in Homecoming. The first is an eternally exhausted and emotionally detached waitress with little recollection of her time as a therapist for a mysterious, experimental veterans' program; the other is a warm, open, optimistic caseworker who cares about her patients and believes deeply in good. The series itself raises many questions about memory, but it's this contrast in which they are sharpest, asking whether, without our experiences, we're still the same people, or if it is those very experiences that define us. Spoilers for Homecoming Season 1 ahead.

The claim that a person's "self" is shaped by their memories isn't a new idea. In the 1689 work An Essay Concerning Human Understanding, philosopher John Locke suggested that the human mind is a "tabula rasa," or a blank slate, that gets filled up with experiences that then define us. But Homecoming examines what happens to that slate when the experiences etched onto it are wiped clean. If someone's memories are removed, are they still the same person? A different version of that person? Someone else entirely? And, in Homecoming's case, is erasing memory worth it to escape trauma, or does that trauma become a part of us? In other words, can we be freed from our trauma without losing a piece of ourselves, too?

The intent of the Homecoming facility, on the surface, appears to be a noble cause — testing a medication that helps soldiers readjust to civilian life and cope with Post-Traumatic Stress Disorder. However, Heidi eventually discovers that one subject, Walter Cruz, isn't just losing the traumatic memories fueling his PTSD, he's forgetting nearly everything about his time in the military. As his pain vanishes, so too do the good memories, funny stories, and enduring friendships he forged while serving — not for his benefit, but so that he can be redeployed on a loop. Fight. Erase. Rinse. Repeat.

In the case of one soldier, this approach is debilitating. After being pulled off of Homecoming's drugs mid-treatment, Shrier (Jeremy Allen White) becomes a mere shadow of his former self. Once a boisterous, hot-headed conspiracy theorist, he devolves into someone quiet, distant, and fearful, seeming to float through life as if a ghost. From this alone, it would appear Homecoming believes eliminating someone's memories also removes their sense of self. When it comes to Heidi and Walter, however, things aren't so black and white.

It's revealed toward the end of the series that Heidi, in an attempt to forget her role in Homecoming, knowingly dosed herself with the memory loss medication. In the present day, she's aware that she used to work for the program, but she doesn't know why she worked there, where it was located, or who she worked with. And her personality, too, appears to have shifted. She used to be kindhearted, determined, and welcoming, but now she's cynical, curt, and complacent. It's as though she's carrying the emotional weight of what happened at Homecoming without the knowledge of where it came from.

That would put Heidi into the same category as Shrier, but Homecoming's final episodes complicate things, suggesting that her memories were never gone — just heavily suppressed. While exploring the former site of the Homecoming facility, Heidi is snapped, suddenly, back into her former reality. She initially doesn't recognize the space — now a wellness center — but she finds her way back to her office, and after she hears the cry of a waterfowl that used to nest outside the window, everything comes flooding back. The old defiant, strong-willed Heidi returns as she tells off her old boss Colin — who'd been grossly manipulating her — and her tone softens when speaking with Department of Defense agent Thomas Carrasco, to whom she'd previously been cold to. This implies that, all along, the original Heidi was still in there — she was just missing a crucial part of her own history. Her attitude was, implicitly, affected by her past experiences; she simply wasn't aware that it was happening. Perhaps, then, Heidi shows that we can never truly lose ourselves, or our trauma, much as we may try to hide.

Further complicating Homecoming's examination of memory is Walter. Heidi watched his memory fade in a way not dissimilar to dementia, and though she clearly believes erasing his formative experiences is unethical, for her, the thought of doing so just to traumatize him all over again was worse. So, she gave Walter a double dose of the medicine, wiping his memories completely and leaving him too incapacitated to serve. It's unclear what Walter went through in the years following, but when Heidi finds him in the town they'd discussed running away to during their sessions, he seems perfectly fine. He has no recollection of Heidi or, assumedly, Homecoming, but he's still the same warm, clever, vulnerable person she used to know. Contrary to what happened with Shrier, this suggests that Walter's sense of self came not from his memories, but from his values and interests.

This mirrors the results of a 2015 study entitled Neurodegeneration and Identity, which concludes that who someone is, deep down, is not defined by their memory, but by their own moral code. The study found that the personalities of those who suffered from memory loss related to Alzheimer's Disease were still recognizable to their friends and family, and that personality changes related to dementia were not related to the deterioration of memory, but rather on dementia's effect on frontal lobe functions.

Between Shrier, Heidi, and Walter, Homecoming's conclusions about memory and how it shapes us aren't entirely clear-cut. The show (rightfully) holds strong that coercing soldiers back into service is unethical, but doesn't come down on whether or not erasing their memories to eliminate trauma is inherently wrong, or if it alters the person to whom those memories belong. Walter seems happier than ever at the end of Season 1, and his personality is familiar enough to suggest that despite the memory loss, he hasn't changed. But he's the exception: the person Shrier was is gone forever, and Heidi's interactions with her mother and ex-boyfriend show that, though she's mostly OK, the shared memories she's lost have hurt others in her life. Ultimately, Homecoming raises difficult questions and no easy answers, but certainly ones that will stick with you long after the finale.