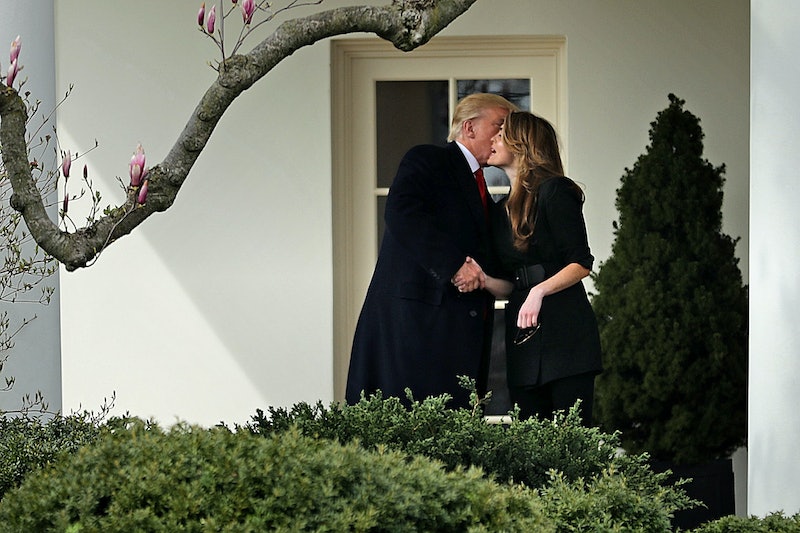 Although former Communications Director Hope Hicks has officially left the White House, the spotlight that has surrounded the 29-year-old member of Trump's inner circle is unlikely to dim. As the president's most trusted adviser and closest confidant, Hicks could be central to the conspiracy and obstruction cases being explored by special counsel Robert Mueller. As that investigation moves forward, former prosecutors and legal experts are debating whether Hicks is likely to maintain the same loyalty to Trump that made her such a valued staffer now that she's outside the White House.

"Loyalty is great," Seth Waxman, a former federal prosecutor, tells Bustle. "But I will tell you that I have seen mothers and sons and sisters and brothers and CEOs and CFOs, people who have worked with each other for decades, [testify against each other]. When it comes down to, 'Am I going to go to jail for that person,' that's it."

While Hicks will no longer be within earshot of the Oval Office, what she heard and saw during her time working in the White House and on Trump's campaign team is of continued interest to investigators. Hicks sat for an interview with Mueller's team in December and is on a short list of Trump aides whose communications are reportedly of interest to investigators. Former federal prosecutors say it's likely she'll be called to answer questions in front of a grand jury. Her lawyer, Robert P. Trout, declined to comment to Bustle for this story.

"She needs to protects herself for her own self-interest, and that's where loyalty can stop," Waxman notes.

See No Evil, Hear No Evil, Speak No Evil

Often described as a surrogate daughter of the president's, Hicks surprised even White House staff when she announced on Feb. 28 that she would be leaving her post as communications director after a record (for the Trump White House) five months in the job. While she maintained that she had been planning her exit for a while, Hicks' resignation came on the heels of a particularly chaotic few weeks in the White House.

It was reported that Hicks and Trump's former staff secretary, Rob Porter, had been romantically involved before Porter was forced out of that job. Two ex-wives of Porter's aired multiple domestic abuse allegations against him, which Porter denied. Hicks played a role in the administration's initial forceful defense of Porter.

But the timing of Hick's resignation raised eyebrows beyond the Porter drama. Hicks told Trump of her decision to leave just one day after she reportedly admitted to telling "white lies" to cover for him during closed-door testimony in front of the House Intelligence Committee. Neither Hicks nor the committee have confirmed that account.

"She used the term 'white lies' to describe what her position required of her," Stanford Law professor Robert Weisberg tells Bustle, "and boy, is she going to be questioned about what that means."

The "white lies" Hicks reportedly said she told ranged from saying Trump was out of the office when he really wasn't, to saying that he couldn't make it to a meeting when he was actually available. It was striking for the president's chief communicator to testify that she tells lies on his behalf, if not at his behest. Hicks reportedly made clear that she never told "white lies" regarding matters related to the Russia investigation.

"One of the things that could have been going on [is that] her lawyers are telling her that she may have some exposure," Waxman says, "and the best thing to do at this point to make it clear that you're not a part of it, and do the thing that someone would hope you would do if you if you came to find out that you were being alleged to be a part of a criminal conspiracy."

Waxman says the thing to do would be to "get away from them as fast and as quickly as you can."

Proximity To Power Is Everything

Hicks was interviewed by the Mueller team in December, and she remains of interest to investigators. She also is one of ten individuals named in a subpoena ordering former Trump campaign official Sam Nunberg to appear before a grand jury. The subpoena compels Nunberg to provide all documents he may have that relate to the ten people on that list, which includes President Trump himself.

While Hicks may not prove to be a principal decision-maker in the issues investigators are looking into, legal experts say her proximity to Trump and his inner circle during the 2016 campaign and in the White House can't be underestimated.

"It's more likely to me that she is a witness to crimes of others rather than that she committed a crime herself," Weisberg says, recalling that Hicks told congressional investigators that former national security adviser Michael Flynn never asked her to tell a lie for him "in the campaign."

Pressed about the time between the election and inauguration, Hicks said that Flynn had urged her to say something that she later learned was not true, according to Rep. Eric Swalwell, a Democrat on the House Intelligence Committee. Flynn has pled guilty to lying to federal investigators and is cooperating with Mueller's team.

There are a handful of other moments that investigators are looking closely at: Hick's role in the drafting of a statement aboard Air Force One regarding a meeting Donald Trump Jr., the president's son, had with a Kremlin-linked lawyer is one of them. In that statement, President Trump says that his son and the lawyer spoke about Russian adoptions. It was later revealed that Trump Jr. agreed to the meeting after being promised "dirt" on his father's Democratic opponent, Hillary Clinton. Numerous White House officials have been questioned by Mueller's investigators about how that statement was drafted and how the president, specifically, was involved.

"Mueller is looking at obstruction of justice charges against President Trump and people around him," Patrick Cotter, a former federal prosecutor, tells Bustle. "A false statement that was intended to distract investigators or mislead investigators as to the nature of a meeting — that very well may be the centerpiece of an obstruction of justice charge."

Waxman says he sees a possibility that Hicks is "someone that may not have had the sophistication, in political circles or legal circles, to really appreciate what she was doing, even if she was involved in conversations." For instance, that statement about Trump Jr.'s meeting with the Kremlin-linked lawyer is more problematic if it was intentionally issued to mislead investigators rather than to steer the public away from further questions about the meeting, according to Waxman.

"For obstruction to occur, it has to be to obstruct law enforcement, it can't be to mislead the American people," he says. "That might have political ramifications, but it's not a crime."

Less than two weeks after that statement was drafted, the spokesperson for Trump's outside legal team, Mark Corallo, resigned. According to the New York Times, Corallo planned to tell Mueller's team that Hicks had said on a conference call that emails offering dirt on Clinton — revealing the true nature of the meeting Trump Jr. accepted — "will never get out." Hicks' lawyer strongly denied Corallo's account of the conference call to the Times, specifically the allegation that Hicks said the emails "will never get out."

"If she meant that we'll destroy them, hide them, delete them, that's very bad because that would be obstruction of justice," Cotter says. "That would be destroying evidence [because] she clearly knew there was a grand jury investigation going on."

Beyond those moments, Hicks was reportedly with Trump when he listed his reasons for firing former FBI Director James Comey and, according to The Atlantic, she was looped into correspondence between Donald Trump Jr. and WikiLeaks in the fall of 2016. Federal investigators are focused both on what Trump knew about the trove of stolen Democratic emails published by WikiLeaks, as well as the circumstances around Comey's firing.

"If she was my client, [I'd say] you've been in the White House, you've been in the inner circle, during all this period of time that Mueller's looking at, Cotter says. "From the Trump Tower meetings, to what the campaign knew about the Russians' efforts to influence the election, through all of these issues...she was in and around Trump and his innermost circle. So it seems to me that at some point she's going to be subpoenaed to a grand jury by Mueller and she's going to be asked questions about all that."

To Plead, Or Not To Plead (The Fifth)

If Hicks is ever subpoenaed to testify before Mueller's grand jury, she would show up at a court house and be put under oath. In that situation, legal experts point out that she won't be able to pick and choose what questions she wants to answer, as she reportedly did in front of the House Intelligence Committee. So she'd have to watch her words.

"The pressure on people to be incredibly careful is huge," Weisberg says, considering the handful of former Trump campaign officials who've been indicted on charges of making false statements to investigators.

Hicks would have the right to decline to answer a question by pleading the Fifth Amendment, preserving her right not to incriminate herself. While that's perfectly legal, it can be stigmatizing. And as Cotter points out, the Fifth Amendment can't be invoked to shield information that protects anyone else, like the president.

"She may feel that that's the only way to avoid implicating Trump," Weisberg says. "[But] let's just say that her reputation in the world of media will not be enhanced if it's known that she pleaded the Fifth on the thing that she is most an expert on."

He also notes pleading the Fifth often tips off prosecutors to where to dig next: "If a prosecutor is sorting out his resources and trying to figure out where he can best direct his next round of inquiry, most would say to themselves, well, she's hiding something."

There's a way Mueller could get Hicks to answer certain questions even if she does plead the Fifth: the special counsel could grant her immunity, which would essentially override any need for her to avoid self-incrimination. "The Fifth Amendment just says you can't be made a witness against yourself," Cotter explains. "Well, if you've got an immunity order, oh hell, you can go in and admit to 50 murders, and there's not a damn thing they can do with it."

For lawyers with experience in front of federal grand juries, seeing a witness refuse to testify is a rarity.

"I think if I was a betting man, and if Mueller does move to have Ms. Hicks testify in the grand jury, my expectation would be that eventually she would [testify], because the alternative will be jail and ruination of her own life," Cotter says.