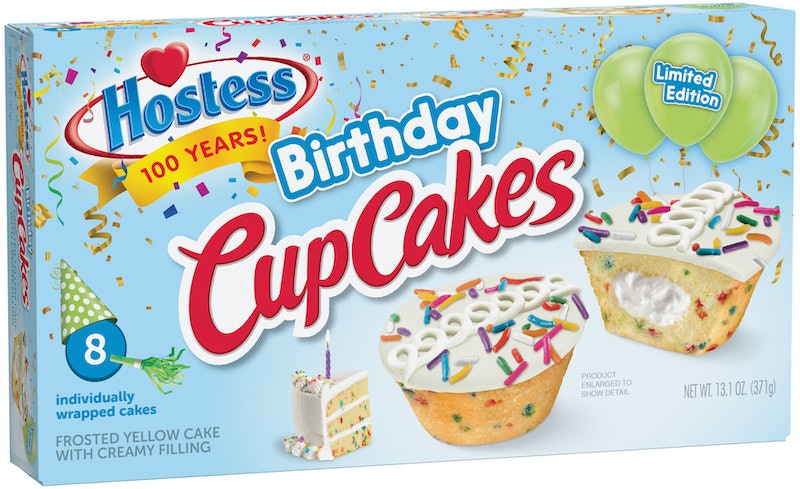 The iconic CupCake has always been my favorite Hostess snack; in my book, it’s kind of hard to beat a filled cupcake. (I also take a weird sort of joy in attempting to peel the frosting off the top in one sheet every time I eat one, but, uh… that’s a story for another time.) As such, I was delighted to find that there’s now a new kind of CupCake available: Hostess Birthday CupCakes have officially arrived in honor of the brand’s birthday. Not just any birthday, though; 2019 marks Hostess’ 100th birthday. That’s quite an achievement, so, hey, happy birthday, Hostess! Thanks for sharing your cake with us. Sharing is caring, and many of us really appreciate that.

The Birthday Cupcake is part of both Hostess’ annual CupCake Craze program, which sees the release of several limited-edition CupCake flavors every year, and the brand’s “Sweetennial” (what they’re calling their 100th birthday). “For Hostess, turning 100 is about all the people who have included us in their special occasions and everyday moments of indulgence,” Keith Peterfeso, Brand Director for All Day Snacking at Hostess, said in a press release. “With this latest product innovation, we are sharing our birthday cake with Hostess fans across the country — spanning demographics, tastes and generations — inviting everyone to take part of this once-in-a-century celebration."

For the curious, the Birthday CupCake itself is golden with rainbow sprinkles baked inside (so, essentially, it’s a Funfetti cake without officially being a Funfetti cake). Vanilla icing tops it off, along with more sprinkles — and as a finishing touch, that familiar frosting swirl, officially called the Original Squiggle, takes its place front and center.

Why the CupCake? Because that’s where Hostess began: With the CupCake. In 1919, the company originally founded in 1849 as the Ward Baking Company in New York and later called the Continental Baking Company began selling what would become the Hostess CupCake — a treat which is believed by some (but not everyone) to be the first snack cake ever brought to market. Then as now, it was made of devil’s food cake; however, it lacked its signature frosting swirl: That element wouldn’t come along until 1950. But in the meantime, between the CupCake’s debut and the addition of the Original Swirl, other flavors were introduced, including orange; additionally, a whole stable of other Hostess cakes hit the scene — including Twinkies and Sno Balls, which debuted in 1930 and 1947, respectively.

In the first decade of the 2000s, the company ran int to some problems; indeed, for a brief moment in 2012, Hostess shuttered, temporarily leaving Twinkie lovers everywhere bereft at the thought of life in a world without their favorite snack cake. The sale of the company from what’s now known as the Interstate Bakeries Corporation to HB Holdings, LLC in 2013, however, brought back both the name and the snacks under new management (although, as Forbes contributor Tim Worstall pointed out in 2016, the cost was steep, particularly for the unionized workforce). Now known as Hostess Brands, the company went public in 2016 — and in the years since, new products and offerings have emerged with some regularity. (Hostess cereal, anyone?)

Which brings us to today: Hostess’ 100th birthday. There’s no better way to celebrate a birthday than with cake — and with the CupCake having been the original Hostess snack, it makes perfect sense for that cake to take the form of a Birthday CupCake.

According to snack food Instagrammer Junk Food Mom, the whole thing just tastes like a vanilla cake topped with vanilla icing; the sprinkles don’t impart any additional flavor. Junk Food Mom found it somewhat disappointing as a result — “wish there was something birthday-tasting about these but there’s not,” the Instagrammer wrote — but did comment, “They sure are pretty, though.”

Your mileage may vary, though. To be fair, “birthday cake” as a flavor really is just vanilla cake with frosting, and personally, I don’t find that sprinkles ever taste like much of anything besides sugar. The appearance is what makes a cake-flavored thing specifically birthday cake-themed — and since rainbow sprinkles just scream “celebration” to a lot of us, they’ve sort of become shorthand for birthday cake.

Birthday CupCakes aren’t the only flavors that are making their debut for CupCake Craze 2019, by the way; Mint Chocolate CupCakes and Strawberry CupCakes are also returning, bringing mint-filled chocolate cakes and strawberry cakes filled with cream back to our pantry shelves for a brief time. Junk Food Mom noted that the Birthday Cake variety can currently be found at Walmart, although you can also use the Hostess product locator in your search to hunt them down.