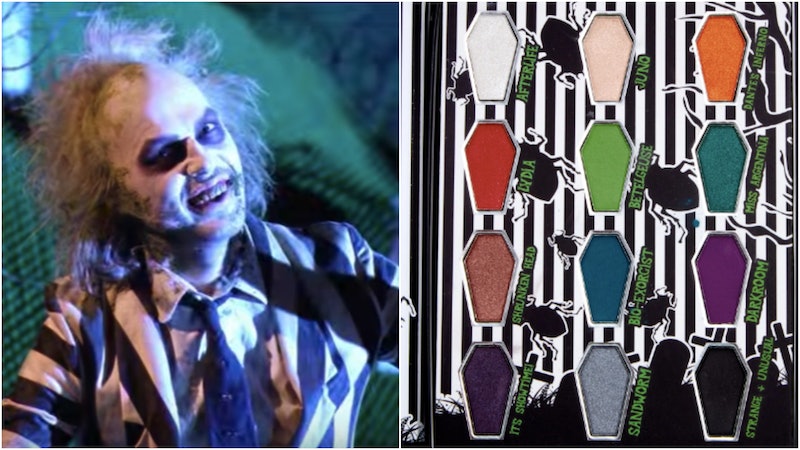 October couldn't have come any sooner because dressing up to battle the things that go bump in the night is just what the fall blues called for. With every costume requires the makeup to do the look justice. Just in time to terrorize us all comes Beetlejuice, Beetlejuice, Beetlejuice! Say his name three times and you'll get Hot Topic's Handbook For The Recently Deceased Eyeshadow Palette and its killer.

Perfectly fit for the strange and unusual, the name of the palette comes straight from the book for the dead that Alec Baldwin and Geena Davis pick up after the couple's "accident". The brand created this palette in honor of the film's 30th anniversary and it's even shaped like the handbook from the movie. To make this palette look even creepier, each of the 12 colors in the palette are shaped in coffin-shaped shades, respectively for the undead.

Decked out in the iconic black and white Beetlejuice stripes, the palette also comes equipped with an interior mirror with *gulp* his name written around the graveyard print. Finally, an eyeshadow palette that understands the manic pixie goth girls of the world. Maybe think about topping off your eye makeup with an all black veil.

Now, for a palette in honor of a character so evil, the names of each of these ghoulish shades did not disappoint. The shades "Afterlife", "Lydia", "Shrunken Head", "It's Showtime", "Juno", "Betelgeuse", "Bio-Exorcist", "Sandworm", "Dante's Inferno", "Miss Argentina", "Darkroom" and "Strange & Unusual" are all appropriately named for one conniving man.

This palette is filled with colors reflective of the film. It contains a bright red, representing Lydia's wedding dress, a pale highlight shade for Juno, the case worker and the iconic lime green shade for Beetlejuice's wild hair.

This isn't the first of Hot Topic's evil-doer eyeshadow palettes. They've also developed palettes for other memorable characters who have caused quite the fright. In addition to this black and white palette, the brand launched its No Place to Hide eyeshadow palette inspired by Friday the 13th with an all cool toned shade selection. Hot Topic also released its Never Sleep Again eyeshadow palette, with none other than Freddy Cruger's Nightmare on Elm Street in mind for the warmer toned palette.

Luckily for makeup lovers, this dark-sided eyeshadow palette will only cost you about $17 and another plus is that it's already available and swatchable in stores and online at Hot Topic. Anyone who's obsessed with Halloween and nostalgia will live (or maybe even die) by this palette and it's precisely made for those who have no problem embracing the dark side.