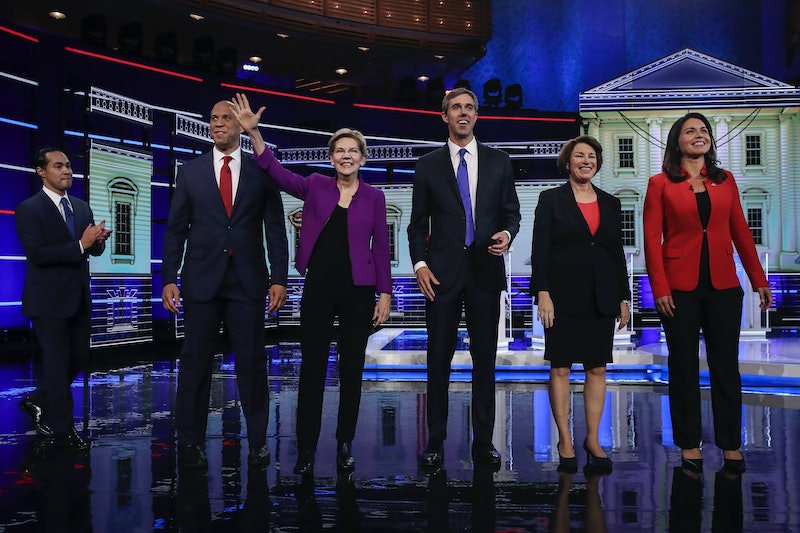 The year 2019 is on pace to be the first year since 2016 with an average of more than one mass shooting per day in the United States, according to the nonprofit Gun Violence Archive (GVA). Gun safety has been top of mind for many voters since a gunman who'd reportedly written a racist, anti-immigrant manifesto killed 22 people in El Paso, Texas, on Aug. 3, and a separate gunman killed nine people hours later in Dayton, Ohio. As a result, in recent days many 2020 Democrats outlined how they would tackle domestic terrorism and/or mass shootings.

All of the Democratic candidates agree on certain gun control measures, including universal background checks and increased federal funding for research on gun violence. But they say those two actions aren't bold enough on their own, according to The New York Times.

“We need to shift the terms of this debate and make solutions bolder, more evidence-based and shift what people think of as common sense,” Sen. Cory Booker (D-N.J.) said at an Aug. 10 gun violence forum hosted by Everytown for Gun Safety, The Times reported.

Though all of the 2020 candidates have released plans to combat gun violence in some way, four of them unveiled detailed new proposals in light of the Dayton and El Paso shootings. Among those plans is wide support for an assault weapons ban, the development and deployment of smart-gun technology, the creation of a federal licensing system, and measures to seize the guns of suspected domestic terrorists.

Mayor Pete Buttigieg of South Bend, Indiana, released an action plan to combat the "threat posed by hate and the gun lobby" on Aug. 5, two days after the shootings. He wrote in a Medium post that the nation needs more than just "thoughts and prayers" as a response.

"After foreign terrorist attacks, airport travelers have to take off their shoes," he wrote. "After three mass shootings in a single week, Congress takes off for recess."

Buttigieg proposes reinstating funding that Trump cut from the Department of Homeland Security to combat white nationalism, and also allocating an addition $1 billion in funding to better assist law enforcement in addressing it. His plan includes training for law enforcement on the connection between gender-based violence and misogyny and violent extremism.

He also wants to stop the spread of violent extremism online by funding tech innovation to identify and track far-right extremism, and by naming and shaming online platforms that won't take steps to eliminate hate groups, such as 8chan.

Two things are unique to Buttigieg's plan: At the end of it, he suggests that people explore national service as a way to create unity. "In these times of growing division, it is more important than ever to create shared experiences," he writes, saying his time deployed in Afghanistan with the U.S. Navy Reserves showed him that "service is a great way to rediscover the bonds that hold us together when others seek to tear us apart."

He also suggests giving more federal grants to local leaders and nonprofits to implement violence and hate prevention strategies in their communities.

Some of the key executive actions she includes are:

Some of the key legislation she wants to pass includes permanent background checks for all gun sales. Though Warren notes she would do this through executive action, her plan states she would push Congress to permanently mandate expanded background checks in addition to closing "the so-called 'Charleston loophole' that allows a sale to proceed after three days even if the background check is not complete."

Other legislative solutions in her plan include federal safety standards for firearms, which currently don't exist for any firearms produced in the United States; a federal licensing system; a one-week federal waiting period for all firearm purchases; a federal assault weapons ban; a ban on high-capacity ammunition magazines; and a ban on accessories that make weapons more deadly, such as silencers and trigger cranks.

Warren's plan also calls for improvements to the Gun-Free School Zones Act, so that it includes college and university campuses and applies "to individuals licensed by a state or locality to carry a firearm." She also calls for a budget that includes annual investments in research on gun violence.

In a Sunday op-ed for The New York Times, former Vice President Joe Biden detailed a few key actions he would take as president, including banning assault weapons and high-capacity magazines. It's an action he took with Sen. Dianne Feinstein (D-Calif.) in 1994 that he writes "made our nation demonstrably more secure."

Additionally, Biden writes that he'd stopping gun manufacturers "from circumventing the law by making minor modifications to their products — modifications that leave them just as deadly."

Biden says he would also support the development and sale of smart-gun technology, which only allows a gun to operate if it's matched with their owner's biometrics, such as their fingerprints.

Though Sen. Kamala Harris (D-Calif.) had previously released a plan to combat gun violence that overlaps a lot with Warren's new plan, she released another proposal after the El Paso and Dayton shootings to "disarm the threat of domestic terrorism." The plan includes taking executive action to require universal background checks for all gun sales, including those that take place online.

Harris plans to empower courts to issue new "Domestic Terrorism Prevention Orders." These orders will allow both law enforcement officers and family members to petition a federal court to temporarily restrict a person's access to guns if they show "exhibit clear evidence of dangerousness," or are a suspected domestic terrorist at risk of imminently perpetrating a hate crime.

She would also direct the National Counterterrorism Center (NCTC) to "address the threat of global white-nationalist terrorism." Congress currently prohibits the organization from handling domestic terrorism cases, she says.

Sen. Kirsten Gillibrand (D-N.Y.) has previously stated her support for universal background checks, stopping gun trafficking, and banning assault weapons, but she appeared to take an even firmer stance on Wednesday. She suggested to CNN that she supports a mandatory federal buyback program for assault weapons, which would include criminal prosecution for any gun owners who don't sell those weapons back to the government.

That differs slightly from Biden's buyback proposal, which he has said wouldn't be mandatory. Some Democratic candidates haven't voiced support for mandatory buybacks, according to Politico, likely because they're controversial.

"I think we should ban assault weapons as well as large magazines," Gillibrand said on CNN Wednesday. "As part of passing that ban, do a buyback program across the country so that those who own them can be compensated for the money they spent."

When CNN's Poppy Harlow asked her whether that buyback program would be mandatory, Gillibrand said:

You don't want people to retain them because if you make them illegal, you don't want to grandfather in all the assault weapons that are all across America. You would like people to sell them back to the government so that you can make sure people who shouldn't have access to these weapons couldn't have them.

Gillibrand went on to say that the whole point of an assault weapons ban is that you don't want people using those weapons. Anyone who is arrested for using one could be convicted of an aggravated felony, she said, creating an issue for law enforcement if some people are allowed to keep their weapons in the case of a voluntary buyback program.

Former Rep. Beto O'Rourke, who represented El Paso in Congress, also said on Thursday that he supports a mandatory buyback program, in addition to an assault weapons ban.

"Not only do we need to end the sale of assault weapons and weapons of war that were designed for the battlefield and have no place in our communities," O'Rourke said Thursday, according to CNN. "We must as a country, buy those weapons, take them off the streets altogether."

It's also worth noting that New York City Mayor Bill de Blasio told Politico he supports a mandatory federal buyback program. Cory Booker previously appeared to indicate support for such a program as well, though he didn't use the word mandatory. As the senator told CNN in May, “We should have a law that bans these weapons, and we should have a reasonable period in which people can turn in these weapons.”

Booker released a plan Thursday to combat white supremacist violence and extremism. In a statement, Booker quoted Martin Luther King Jr. who once said, "It may be true that the law cannot make a man love me, but it can keep him from lynching me."

"So in my administration, we will use the full force of the presidency to combat hate crimes and root out white supremacist threats wherever they arise,” Booker said in the statement, according to HuffPost.

The plan is an addition to a gun violence prevention plan he released in May. Most notably, this new plan includes creating a White House Office on Hate Crimes and White Supremacist Violence — the only type of office suggested by a presidential candidate so far — to help federal agencies work with communities to prevent hate crimes and address threats, HuffPost reported.

His plan would also direct the FBI and Justice Department to address white supremacist terrorism in the same way it prioritizes and addresses foreign terrorism, and it would improve data collection on hate crimes. Booker would also have the FBI change its "racially motivated violent extremism" label for crime to "white supremacist."

These updates to candidates' stances on gun control show an evolution that will likely continue into 2020, as they react to future incidents of gun violence and Congress tries to simultaneously figure out a response.