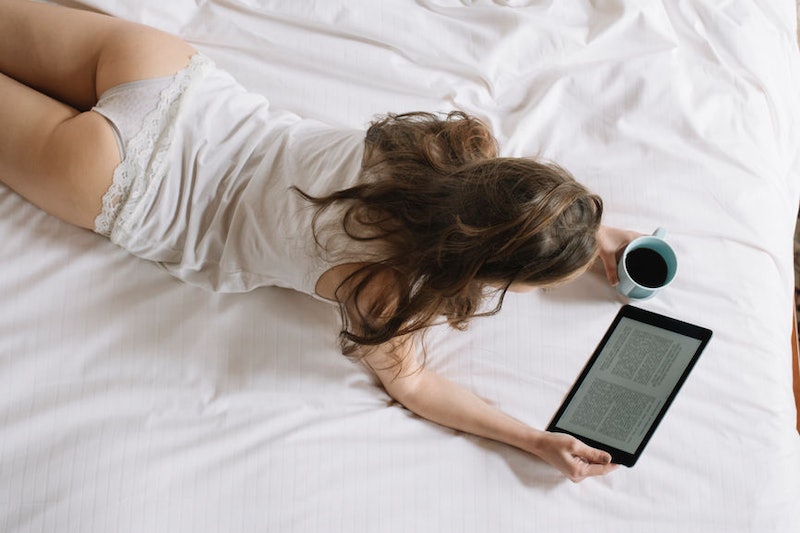 This led me to think about the broader role consent plays in modern erotica, and the demand for it from publishers. As the editor of Cleis Press’ Best Women’s Erotica of the Year series, among dozens of other anthologies (full disclosure: one of my anthologies was included on the Cosmopolitan.com list.), it is a subject I’m deeply familiar with. I’ve gone back to authors who’ve submitted stories where consent wasn’t clear and suggested ways they could finesse their writing to make affirmative consent consistent. I wanted to see if this was standard practice.

The editors I contacted for this article all emphasize that consent is crucial to their editorial process, though each has different processes for handling its portrayal. They all accept submissions from the general public, with guidelines that delineate what they’re looking for specifically from authors, including treatment of consent.

Ellen Clark, co-founder of the erotica app Sunsette, which launched in Jan. 2019, tells Bustle that "consent is included in all of our characters’ interactions." In their writing guidelines, they list “non-demeaning/degrading scenarios” as a crucial component. Clark explains, “The litmus test for us as copyeditors is whether the consent is 'strongly believable.'" Sometimes, this is nonverbal, if the context "strongly suggests consent," but "if a character verbalizes consent but the context of the story suggests something contrary to that statement, it's not believable, and the story wouldn't be published." Clark says the issue is so important to Sunsette, that lack of consent is the biggest reason stories are rejected from the platform.

"But because sex is so deeply personal, that still leaves a lot of gray area. We have conversations as a team to try and navigate that ambiguity in each story."

Similarly, for Gina Gutierrez, CEO and co-founder of audio erotica app Dipsea, which launched in Dec. 2018, consent is paramount. "We want every portrayal of sex in Dipsea to be safe, consensual, and positive," says Gutierrez [those three words are also elaborated upon in their writing guidelines]. "But because sex is so deeply personal, that still leaves a lot of gray area. We have conversations as a team to try and navigate that ambiguity in each story. You’ll hear a lot of 'Can I touch you?' and 'Would it be okay if I kissed you?'" For stories about established couples, consent may not be quite as explicit, indicated perhaps with a nod or a request to "Touch me." In the guidelines for authors, Dipsea states, “If characters are equally pursuant and engaged before they have sex, then pausing to ask for verbal consent would probably feel forced and unnatural. If one character is pursuing another more one-sidedly, have them ask!”

The problem, according to Renault, is "though she may confide in the reader that she’s okay and might say at the end of the story that she had a great time, our protagonist never actually tells her partner that she’s okay with how she’s being handled. As she feigns reluctance or struggle, her lover doesn’t know that she’s just playing around to build tension, because she never says anything. In fact, she might even say something to the effect of, 'I don’t know... I probably shouldn’t...'"

While those words might be part of the character’s roleplay, it’s not enough to meet Bellesa’s standards for consent, unless it’s made clear in the text that this is a desired scenario. Otherwise, the portrayal can all too easily blur the lines between wanted and unwanted sexual acts. "There’s nothing inherently wrong with this scene as a story,” explains Renault. "There’s nothing wrong with getting turned on by it. But consent has not been established here." Renault says that stories about graphic non-consent in her inbox are rare; the type of story she outlined above is more frequent, not because authors are ignoring the subject, but because of a combination of not understanding "how to establish it and genuinely not realizing their oversight."

Renault has worked with authors such as Elissa O on her story "The Blind Date" to make consent within a kinky context clear. In this case, that involved moving a line where a dominant woman reminds her submission partner of her safeword so it comes before a line where the submissive says, “I-I can’t take it anymore,” followed by “My voice and body shook. I kept saying no no no but I loved that she wouldn’t stop. I loved how she was pushing me." Those lines without the safeword context could likely be read as violating consent, but with that added line, the reader knows the submissive has the option of putting a stop to the action if she so desires.

Even — or perhaps especially — in nonfiction erotica, where rather than stemming from the writer’s imagination, the stories are based on actual events in the author’s life, consent is also vital. Carly Pifer, founder of true story erotica website AURORE, says that, "Our submission guidelines state very clearly that all stories must be consensual, and if the stories are about a rape fantasy or include violence, consent must be established somewhere in the story."

Yes, erotica often represents sexual fantasies, a space where readers and listeners can tap into their own desires. But while the plots may sometimes be outlandish or over-the-top, the reality of making sure each encounter is desired, not simply acquiesced to, is part of what can make it hot for those on the receiving end. "Consent creates a level of comfort that’s crucial to really be able to 'lose yourself' in an erotic experience," Gutierrez says. "At Dipsea, we try our best to think through all the things that might be blockers to a listener feeling comfortable: clear communication; obvious mutual respect; even creating settings that feel really safe and sexy."

In light of the #MeToo movement and the cultural conversations about sexual autonomy and power that have resulted, Bellesa’s Renault, who began her job in January 2017, sees the role of erotica as even more crucial to how people learn about sexuality. In some cases, erotica is simply entertainment, according to Renault, "what people read in their smutty stories can be more than just a fun way to escape. For some, it can serve as a significant (and sometimes only) source of sexual education."

This means that she feels a responsibility to represent consent accurately, in ways that could be modeled off the page. "Weaving consent into our fictional narratives has, and will continue to have, a huge influence on how we talk about and practice consent in the real world," says Renault. "That’s not to say that every work of fiction needs to be educational. But I think it’s important to keep in mind that every piece of work could be educational for someone."

Pifer says that through running AURORE, she’s "heard a lot of women state plainly that they do not have many or any positive sexual encounters to write about." That reality has given her more motivation to make consent clear in the stories she publishes. "This tells me there is a big gap in what women want and what is being vocalized versus what men think we want,” she explains. "Enthusiastic consent is obviously the most important thing, so we need to ingrain that in people and give them models for incorporating consent into dirty talk and other play."

"But unfortunately, there is also still a lot of misunderstanding of what consent really looks like, both in real life and in the fiction that tries to mirror it..."

Renault said that since Bellesa stipulates consent in its guidelines, “we attracted the people who were consent advocates.“ Submissions that “miss the mark on establishing consent” have been consistent prior to and after the #MeToo movement. “Sometimes it’s a case of a new author not realizing the oversight in how they’ve organized their narrative. But unfortunately, there is also still a lot of misunderstanding of what consent really looks like, both in real life and in the fiction that tries to mirror it,” Renault observed.

Pifer highlights a story on AURORE called "The Masseuse" as an example of "how sexy consent can be." She points to the many instances where the characters ask each other for permission to perform specific acts, sometimes as dialogue, other times summarized in the text ("We make plans for the weekend. He asks if he can be naked when I show up.").