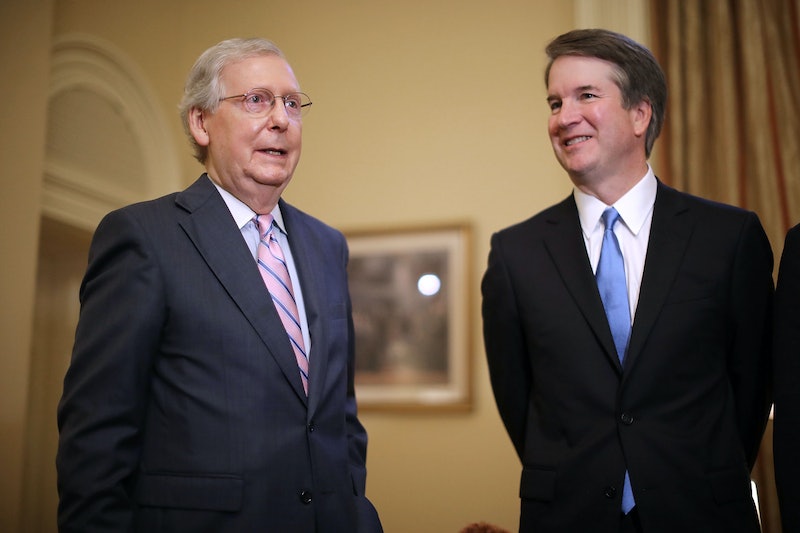 The FBI completed its investigation into the multiple allegations of sexual assault against Brett Kavanaugh — all of which he has vehemently denied — on Wednesday night, handing it over to the White House for review. Without waiting for the report to be made available to the Senate, Majority Leader Mitch McConnell filed for a cloture vote, which will significantly impact Kavanaugh's confirmation process.

According to Vox, a cloture motion requires the signature of 16 senators. After the motion is filed, the Senate has to wait at least two days to then hold a preliminary procedural vote. So by filing cloture on Wednesday evening, McConnell has essentially ensured that the Senate will hold the procedural cloture vote on Friday.

The cloture vote needs a simple majority (at least 51 to 49) to pass. If it's passed, the Senate will have 30 hours to debate the confirmation before holding a final confirmation vote on Saturday. It might sound procedural, but there are still a lot of ways the confirmation process could go, now that McConnell filed cloture. Most of the uncertainty centers around a group of undecided, swing-vote senators — Republicans Jeff Flake, Lisa Murkowski, and Susan Collins, and Democrats Joe Manchin and Heidi Heitkamp.

Last week, moments before the Senate Judiciary Committee voted to advance Kavanaugh's nomination to the Senate floor, Flake surprised the committee by adding a condition to his vote. Joined by Democratic senators on the committee, Flake said he would be voting no on the final confirmation vote if the committee did not initiate an FBI investigation into the allegations against Kavanaugh first.

Now that that investigation has wrapped up, it's still unclear how a handful of senators will vote. Much of the speculation has centered on Lisa Murkowski and Susan Collins in particular. Both are pro-choice Republicans who might potentially object to Kavanaugh's previous rulings when making their decisions.

Flake, Murkowski, and Collins all appeared upset after Trump mocked Ford at a rally on Tuesday, painting her testimony as unreliable. According to Politico, Murkowski called the comments "wholly inappropriate," and "unacceptable," while Collins said Trump's remarks were "just plain wrong."

"I wish he hadn't have done it. I just say it's kind of appalling," Flake told the Today Show on Wednesday. But even with these condemnations, there are still no solid indicators as to how these three will vote.