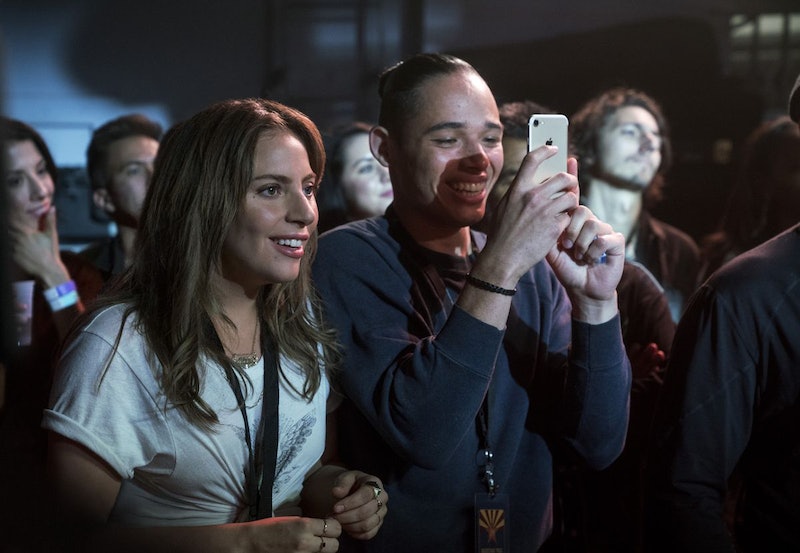 A Star Is Born is a lot of things: it's Lady Gaga's film debut, a serious awards season contender, and an excellent beard moment for filmmaker and star Bradley Cooper. But it's also a movie about art, how to make it, and the dangers that come with mining your pain for the sake of that. For Jackson and Ally, talking about songwriting and falling in love are the same thing. They learn about each other through the words they write, and that perceived authenticity or lack of it defines the peaks and valleys of their relationship. And according to the musicians who worked on the movie, A Star Is Born understands songwriting and defines it in a way that other movies haven't.

"My favorite line in the movie is when Jackson Maine says to Ally, something along the lines [of], 'You have to dig deep in your soul, otherwise you won’t have legs.' And it hit me so hard [at the screening] last night in a way that it hasn’t," the actor and musician says during a junket at the Toronto International Film Festival. He goes on to say that he's been writing music with new producers, but that branching out with new collaborators can be a challenge, especially when it comes to holding your own.

"And there’s moments when you’re in the studio and something doesn’t feel right, but you’re just like, 'Well this person has 10 hits in the last three years, so I’m gonna follow their lead.' But inside, you’re like, 'But this doesn’t feel like this is the most honest song or lyric. This is not the lyric I wish I would have written,' or 'this is not the lyric I want to write right now,'" Ramos says.

In A Star Is Born, Jackson values truth more than anything, even his own health. And it can be risky to expose yourself through your work, especially if you, like Cooper's character, lack healthy coping mechanisms. He battles his addiction throughout, and it goes hand in hand with his chosen profession.

Singer-songwriter Lukas Nelson helped shape the sound of the movie, consulting on the music and cowriting songs on the soundtrack. And he stands by the film's melancholic take on laying your soul bare through art.

"It’s an important movie for this day in age because what we really need is more musicians who live from the heart and the soul," he says. "The only thing is, when you go that deep, you have to be really careful that you can go to those places and then still avoid the pitfalls that being in those places can take you. Very deep places."

The "perfect musician," Nelson sums up, is someone who can delve deep and then pull themselves out. The audience learns about the places in his past that Jackson has to access as the movie goes on, and they're full of pain and loss.

A Star Is Born is very earnest in its storytelling in this vein, and maybe you'll walk away feeling like it has a self-important or pretentious take on making music. But Sam Elliott, who plays Jackson's brother Bobby, highlights the movie's unfortunate relevancy, saying, "The addiction element of this picture, is something that everybody can identify with in this society that we live in ... I think a lot of it comes out of the arts, and you see it in the arts for whatever reason."

You've probably heard by this point how far Cooper went in order to put what he wanted to onscreen. He worked with a voice coach for a year and a half to be able to convincingly play a rock star, required that all vocals in the movie be recorded live, and even performed at festivals as Jackson alongside Lady Gaga as Ally. In a New York Times interview, Cooper was reticent to explain how his own life and relationships informed the movie, preferring instead for A Star Is Born to speak for itself.

And if you put enough of yourself into something, maybe it does. That's Jackson Maine's philosophy, and one that much of the cast seems to share.

"It’s amazing to see these artists strive for honesty," Ramos says of his co-stars. "And I think we have to just continue to strive for the truth."