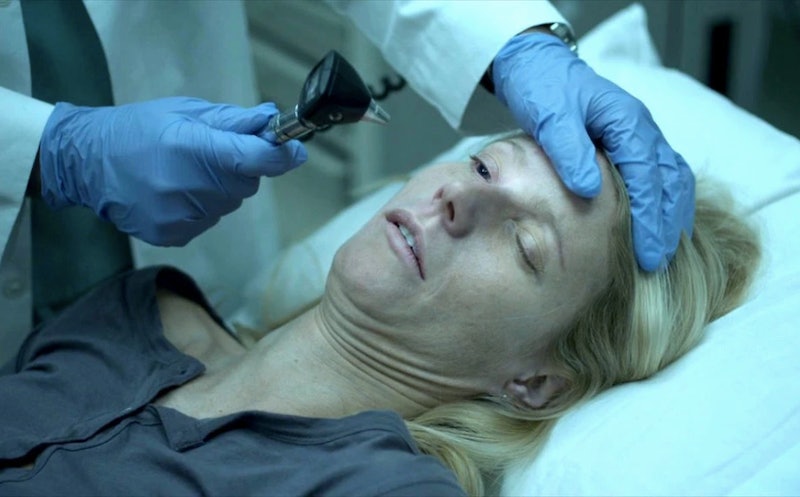 “Nothing spreads like fear,” suggests the tagline of Steven Soderbergh’s 2011 pandemic thriller Contagion, which has skyrocketed on the iTunes movie rental chart in light of the coronavirus outbreak. Officially declared a pandemic by the World Health Organization, COVID-19 has rapidly transformed every aspect of our daily lives, with the NBA suspending its season, over 118,000 people being infected with the disease as of March 12, and anxiety spreading like wildfire. (Though according to the Centers for Disease Control and Prevention, most people are at low risk of catching coronavirus, and those who do may only present moderate symptoms such as coughing, fever, and shortness of breath.)

In these unsettling times, Contagion may seem like a surprising salve. But audiences have found that the film provides a sense of much-needed certainty about what’s to come, albeit a melodramatic Hollywood version.

So how much stock should we take in Contagion’s depiction of a coronavirus-like pandemic? Bustle spoke with three infectious disease specialists to break down the science behind the film. Here, they share their insights on vaccines, bat-to-pig-to-human disease transmission, and how the movie’s fictional virus compares to COVID-19.

Contagion opens on Gwyneth Paltrow’s character, Beth Emhoff, coughing quietly as she awaits a connecting flight out of Chicago O’Hare. Within five days, she is dead — along with her son — from a mysterious virus that seems to cause rapid and catastrophic brain damage. In an unforgettable autopsy moment, two horrified medical examiners peer into Beth’s brain after surgically removing the top of her skull. “Should I call someone?” one asks, to which his superior responds, “Call everyone.” It’s soon revealed that the virus affects both the brain and lungs, and has a mortality rate between 25 and 30%.

“It’s your worst-case scenario,” Dr. Paul A. Offit, M.D., professor of vaccinology at the University of Pennsylvania, tells Bustle. “What’s depicted is a contagious disease that caused a fatal encephalitis [inflammation of the brain]. You can think of it like airborne rabies – if you develop symptoms of rabies, it’s a death sentence, but it’s very difficult to contract.”

Though a “worst-case scenario,” it’s a real concern in the medical community. “For years, infectious disease epidemiologists have been very concerned about the possibility of a flu that is not only easily transmitted from human to human but has a high mortality rate,” notes Dr. Christiana Coyle, M.D., professor of epidemiology at New York University. “Fortunately, most flu viruses are easily transmitted but have relatively low mortality rates.”

At least, not in terms of its symptoms or prognosis. “[The virus in Contagion is] absolutely not what we’re dealing with with the coronavirus,” says Coyle. “If people are rewatching it, I just want them to be very clear that there is no evidence that the virus we're seeing today is anything like the virus in the movie.”

There are some similarities in terms of the fictional virus’s origin, though. In the final moments of the movie, we see the chain of events that led to the virus’s creation: a tree is bulldozed, displacing a bat. The bat flies over a pigsty and drops a piece of banana from its mouth. A pig eats the piece of banana, ingesting the bat virus. The pig is later slaughtered and prepared by a chef, who doesn’t wash his hands in between touching the carcass and shaking hands with Paltrow’s character — which is how Beth becomes patient zero.

What happens in this sequence is known as a “spillover event,” when a pathogen moves from one species to another. Once it’s jumped into an unfamiliar host, it may mutate and become deadly. Rather than going directly from a bat or bird into a human, most viruses need a “bridge host” to act as a go-between — which, in the case of Contagion, is a pig. “Once it’s in the bridge host, it usually just takes a couple of mutations in the virus to make it transmissible to humans,” Coyle explains. Just like in Contagion, the novel coronavirus (COVID-19) is most likely the result of a spillover event but the bridge species isn’t yet known.

Matt Damon’s character has a natural immunity to the virus, which is plausible

After his wife and stepson both succumb to the virus, Damon’s character is put into quarantine, but is ultimately found to be immune. Though this may seem like a convenient Hollywood twist, it’s a real phenomenon. “We do, in a disease like this, sometimes find an individual who for one reason or another has genetics that are resistant,” explains Dr. Alice Huang, Ph.D., senior faculty associate in biology at Caltech. “The fact that the father was naturally resistant, and found out during the course of things that his daughter was not, was very believable to me.”

Using the novel coronavirus as an example, Huang noted that children under 10 are so far seemingly proving to be relatively resistant. “One could say that not many of them have been infected and we just don't have enough numbers yet, but so far that's standing up and we're seeing it across the board. So there's something about them that could help us save other people, if we understood what that resistance involved,” she says.

One of the film’s less plausible plot elements is just how fast they’re able to develop a vaccine in the film. “This is a novel virus where you’re starting from scratch, and I think they did it in a few months in the movie, which is ridiculously fast,” notes Offit, who co-invented a rotavirus vaccine that took 26 years of work.

But in other respects, Contagion’s vaccine is highly plausible — mainly the process of inventing it. “They didn’t get it on the first try. Far from it. You see them make something they think is a vaccine, give it to monkeys, and then you see scene[s] where they’re taking dead monkeys and putting them into plastic bags, [because] it's not working. That's an accurate message, that you’ll encounter a lot of failure before success with making vaccines,” Offit says.

The vaccine is also given out via a randomized lottery system using birthdays, which would be unlikely in reality. “There is a question of production capacity, assuming you need 300 million doses for every person in the U.S.,” says Coyle. “So yes, if we had limited production there would have to be some sort of rationing, but I don't think it would be birthdays, I think we would do health care providers and first responders initially, and then we would kind of go out in waves from there.”

Yes, the average person really does touch their face a lot

The horrifying statistic that the average person touches their face 2,000 to 3,000 times per day, quoted in the film by Kate Winslet’s EIS officer Erin Mears, may have some truth to it. While studies put the actual number closer to 15 to 23 times per hour, it's still a lot of face-touching. “Have you ever put a camera on yourself and seen what your hands are doing, when you think you're doing other things or working at your computer?” Huang asked. “Everyone’s thinking about it more now, and you can control it — you can say OK, while I’m at this restaurant, I'm not gonna touch my face, and as soon as I get home I will wash my hands. You can do that, but it takes a lot of control.”

The film does a great job of underscoring the danger of touch, particularly of potential fomites — objects or materials that come in contact with an infected person and later transmit the virus. A perfect example is a casino sequence in which Paltrow’s character unknowingly infects multiple people by way of her credit card, an empty cocktail glass, and a casino token. “That was extraordinarily well done, to give you the sense of how a virus like this can be transmitted from one person to another with the most casual contact, with fomites,” says Huang. This is why washing your hands, and avoiding touching your eyes, nose, and mouth, is so vital.

In the film, CDC employee Dr. Cheever (Laurence Fishburne) is reprimanded after he secretly informs his wife that the epidemic is about to get serious in Minneapolis, and tells her to get out of town. This is both a deeply human impulse, and a serious ethical blunder for someone in his position. But according to Coyle, it’s a conflict that comes up in the field.

“That felt absolutely familiar to me,” she says. “It’s been years since I worked with CDC, but we did have a situation that could have developed into something more serious and did not, and we did have employees who were reprimanded for doing exactly what [Cheever] does in the movie. Your impulse in a potential disaster is to protect your family and it is very, very difficult to have this kind of information and not use it for your family’s benefit.”

“That's the one character that always haunts me,” Huang says of Alan Krumweide, the fake news-spouting blogger who spreads conspiracy theories about the virus online while selling his own homeopathic remedy, forsythia. “This anti-vaccine activist who is essentially a huckster? I mean, I got an email today from somebody about Alex Jones [who is currently promoting a toothpaste that he claims kills coronavirus], and this is what always happens,” says Offit. “With every outbreak, every disease, there’s an element of ‘don’t trust mainstream medicine, don't trust doctors, don't trust vaccines, trust me, I have this magic medicine that's gonna make you better.’”

While still a Hollywood movie, Contagion offers a number of important takeaways

If you decide to give into that morbid impulse to rewatch Contagion, it may not be a bad thing. While a highly dramatized portrayal of a pandemic, the movie still offers valuable lessons and insights — especially in its depiction of the quiet fortitude of health care workers on the front lines. “Keep in mind that as incompetent as government seems, there are also so many people like [Winslet and Fishburne’s characters], who are incredibly devoted and do have your very best interests at heart,” says Coyle.

The film also offers a model of the level of caution viewers should take. “I think the movie offered a very realistic sense of what you should be afraid of, as opposed to this free-floating anxiety, the idea that no matter where you are, you’re at risk,” says Offit. “I hope that people at least have a realistic expectation of how a virus is spread, how you can reasonably protect against that by hand washing, not touching your face, [and] social quarantining to some extent.”

Huang also hopes that watching Contagion will encourage preparedness rather than panic. “The two things that we have some control over is our social distancing and our personal hygiene,” she emphasizes. “We all need to be aware that what is coming is really a very mild disease, for most people. If we all do our part, we will slow down the spread of the virus.”

Dr. Paul A Offit, M.D., professor of vaccinology at the University of Pennsylvania

If you think you’re showing symptoms of coronavirus, which include fever, shortness of breath, and cough, call your doctor before going to get tested. If you’re anxious about the virus’s spread in your community, visit the CDC for up-to-date information and resources, or seek out mental health support. You can find all of Bustle’s coverage of coronavirus here.