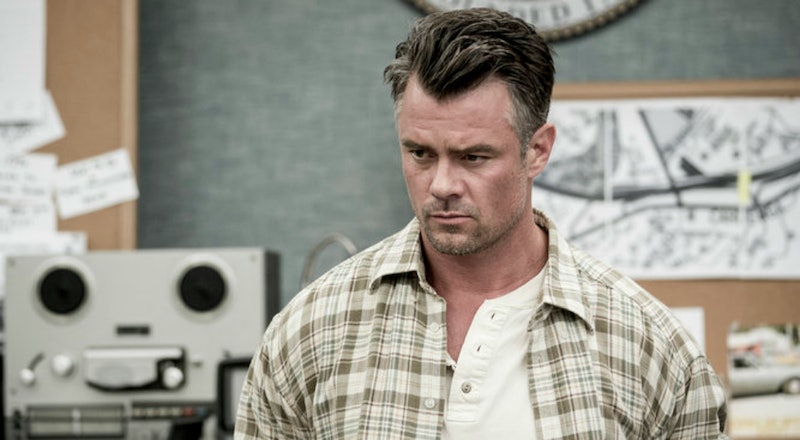 It had been nearly a decade after the 1996 murders of Tupac Shakur and Christopher Wallace, aka Biggie Smalls, aka The Notorious B.I.G. before Greg Kading started formally investigating them in 2006, as The Huffington Post reported. Kading hadn't been the first LAPD detective to look into those cases either — that would be the LAPD's Russell Poole in the late '90s, according to The Independent. He is, however, the person whose interpretation of the cases had the most significant influence on the USA true crime drama Unsolved: The Murders Of Tupac And The Notorious B.I.G. The real Greg Kading, portrayed in the series by Josh Duhamel, wrote the book that Unsolved based its narrative on and also served as a co-executive producer on the series, premiering Feb. 27.

According to Billboard, the show unfolds across three time periods: 1993, portraying the budding friendship of Shakur and Wallace; 1997, during the initial LAPD investigation headed by Poole; and 2006, with Kading's task force taking a fresh look at the evidence. Kading used Poole's 1997 investigation as a starting point for his own, and eventually published his own findings in the book Murder Rap: The Untold Story Of The Biggie Smalls & Tupac Shakur Murder Investigations. That book was adapted into a 2016 documentary titled Murder Rap, before serving as the basis for Unsolved, per The New York Times.

While the three time periods all feature different central characters, Kading's book provides the filter. Shakur and Wallace will never be able to give their accounts, aside from what they revealed about their own lives before their passing. Poole is unable to comment on the accuracy of Unsolved as he passed away in 2015, according to Rolling Stone. Of the four central characters of Unsolved, Kading was the only one left to tell his version of the story. And while the mystery itself remains formally unsolved, Kading believes he knows who is responsible for the deaths of Tupac and The Notorious B.I.G.

When asked who he thought killed Tupac Shakur in a Reddit AMA, Kading confidently claimed that the artist was shot and killed by a man named Orlando Anderson, assisted by four co-conspirators. He also claimed that Death Row Records' then-CEO Suge Knight hired a man named Wardell "Poochie" Fouse to kill Wallace in retaliation for Tupac's death. Kading also said that he believes "ongoing beefs between multiple factions of [Biggie's record label] Bad Boy and [Tupac's record label] Death Row" are the reason both men were killed.

According to The Los Angeles Times, the LAPD "still considered Anderson a suspect in the unsolved murder" a few months prior to his death in May of 1998. Kading told Reddit, "Unfortunately, by the time we had factual proof, Orlando was already dead from an unrelated gang shooting." The Los Angeles Times reported that Wardell “Poochie” Fouse was killed by gunshots on July 24, 2003. Neither Anderson or Fouse were ever arrested or charged in conjunction with Shakur or Wallace's murders.

Whether the narrative of Unsolved concludes with an explicit declaration of guilt is yet to be seen. The Guardian reported that Kading was taken off the taskforce in 2009 "owing to an internal affairs investigation relating to a separate case," which derailed their work. The publication goes on to say that Kading was exonerated of that issue, but retired soon afterwards.

Kading told The Guardian that since the publishing of Murder Rap and the disbanding of the taskforce, he was staying busy "all over the map." He started his own private firm, investigating murders and missing persons. He also mentioned collaborated on "book and film projects."

In a behind the scenes clip from NBC Universal, Kading discusses how his involvement in the series came about, beginning with being approached by creator Kyle Long, who was aware of his work. He calls seeing himself portrayed by Duhamel "surreal," and speaks to a level of personal detachment that the process creates. He also says that he considers sharing these never before published details his duty.

"We're going to give the audience information that they never had access to," Kading says in the video. "For me personally, I just felt compelled knowing what I knew and what we had discovered in the investigations, to educate the public."

Unsolved will be the most visible platform yet for Kading's understanding of the events that led to Tupac and Biggie's deaths. While the TV adaptation will surely change or omit some details, Kading's direct involvement indicates that Unsolved runs closely to at least his version of the truth.

More like this
Michael & Kathleen Peterson’s House From ‘The Staircase’ Has New Owners
By Kadin Burnett and Kayla Blanton
Don Crowder Successfully Defended Candy Montgomery, But His Story Ended In Tragedy
By Gretchen Smail
All The Theories About Kathleen Peterson’s Death
By Morgan Leigh Davies
Justin Timberlake’s ‘Candy’ Character Really Investigated Betty Gore’s Killing
By Brad Witter
Get Even More From Bustle — Sign Up For The Newsletter