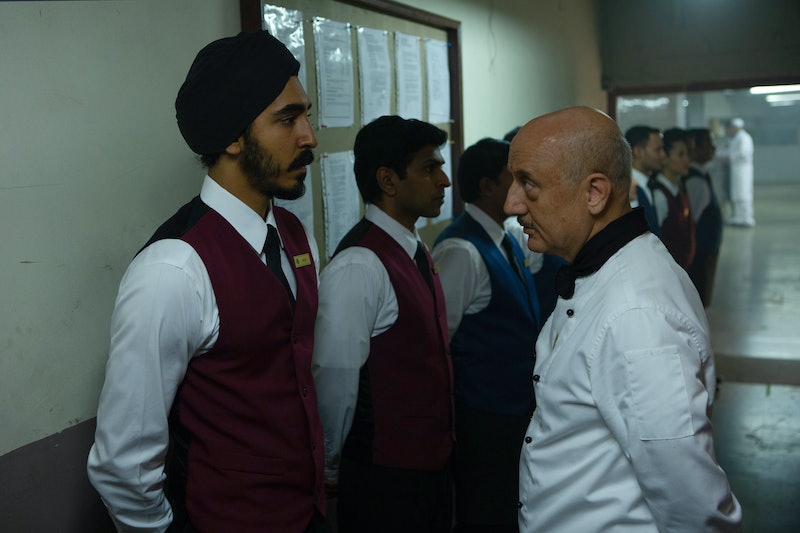 Hotel Mumbai, out Mar. 29, tells the true story of the 2008 Mumbai terrorist attacks, also known as 26/11. But while it's based on a real event, how accurate is Hotel Mumbai compared to what actually happened? While most of the movie's main characters aren't based on specific real people, the basics of what went down stay fairly true to life.

On Nov. 26, 2008, a group of Pakistani men associated with the terrorist group Lashkar-e-Tayyiba attacked several locations in Mumbai, including the Chhatrapati Shivaji Maharaj Terminus train station, Cama and Albless Hospital, and the Taj Mahal Palace Hotel, which is the primary setting of Hotel Mumbai. In total, 164 people were killed, according to CNN, and over 300 were injured. At the hotel, 31 people were killed over four days. At the time, around 450 people were staying there, not including numerous staff members.

The film shows the attacks at the train station and at a restaurant called Cafe Leopold, along with real footage of news coverage playing on televisions in the background, but because the film spends much more time on the hotel, that's where the differences between this retelling and the real life story are more apparent.

To start, a news voiceover in the film notes that there were as many as 1,000 guests at the hotel, which, as stated above, is about double than what there were reported to actually be.

Next, not all of the characters are real people, which makes sense for a film like this. The terrorists who are shown are based on the real, specific attackers, as their names are the same. Other than that, the only other main character who is a real person is the chef at the hotel, Chef Hemant Oberoi, who is played by Anupam Kher. Oberoi had an unwavering dedication to his guests and knew the hotel layout well, so he was able to help save the lives of some of the people trapped inside.

The other main characters were based on an amalgamation of people who were there during the attack. Director-writer Anthony Maras explains in the press notes for the film, "[W]e were able to interview a whole lot of people who worked or still work at the hotel, even after having lived through all the attacks." These people formed the basis of the character Arjun (Dev Patel), a waiter at the hotel, who has a pregnant wife and child waiting for him at home. Zahra (Nazanin Boniadi), a Muslim woman staying at the hotel with her American husband, nanny, and baby, is based on two women who were there during the attack. An eccentric Russian man named Vasili (Jason Isaacs) is based on a several people including "a playboy business magnate and a special-forces Army officer," according to the press notes.

As for the plot itself, in real life, 150 people did make their way quietly down a stairwell to try to escape, which also happens in the film. The difference is in the real story, they were, per CNN, led by a South African security consultant, Bob Nicholls, who was staying at the hotel with some of his team; in the film, they are led in part by Patel's character.

It's also true that, as shown in the movie, westerners were taken as hostages. According to The New York Times, these hostages included American and British citizens.

The film also notes that Mumbai police were not equipped to deal with such an attack on their own, so additional forces had to come in, which took hours. This did happen, although it's unclear if it took quite as long as shown in the film. The Times reported that Indian military forces arrived to another hotel that was attacked around 2 a.m., which would have been around four hours after the attacks began. Officers from the Rapid Action Force were also there.

One thing that is clearly different from the movie compared to real life is how long the attack went on. The attack on the Taj Hotel took place over four days, from Nov. 26-29. The film makes it seem that the attack took place over one night, with the survivors all escaping the next morning.

Of course, there are also plenty of other dramatic aspects added in by Maras and co-writer John Collee to build the characters and shape the story, which didn't actually occur. But, overall, the changes made for the film mostly consist of amalgamated characters and timeline modifications — no liberties that other movies based on true events haven't taken before.