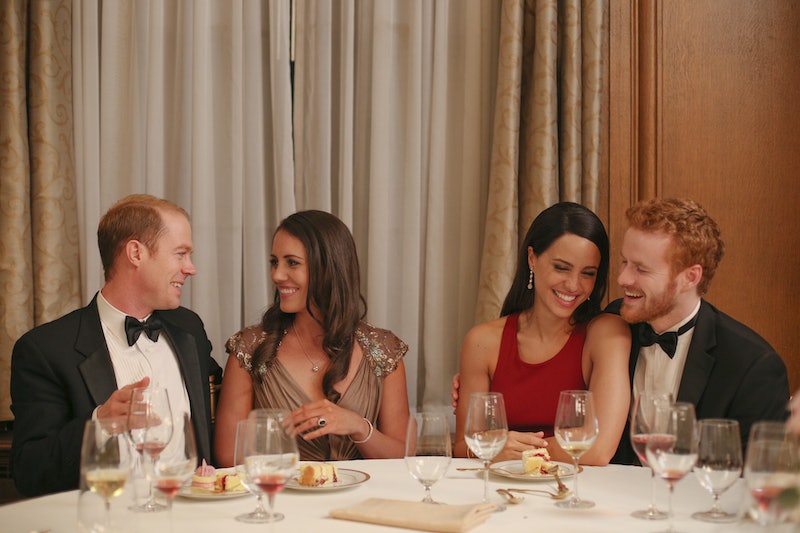 This week, royal enthusiasts were clamoring to see what Lifetime's newest take on real-life events would hold. But, the network isn't exactly known for its lack of sensationalism. So, how accurate is Lifetime's Harry & Meghan: A Royal Romance? (Bustle reached out to the royal press office for comment, but did not hear back.)

Obviously no movie not officially endorsed by the royal couple could tell the full, absolute truth about the events that have transpired between them — there has to be some creative license taken in order to fill in the blanks. And there are a lot of blanks — Prince Harry and Meghan Markle have been notoriously private about their relationship from the beginning, though they did give an interview after announcing their engagement. It does seem like the Lifetime production took some notes from that interview, though, judging by how the movie portrays the events of Harry's proposal.

Markle told the BBC that the two were at home when Harry proposed, cooking chicken together. "[We were] trying to roast a chicken and it just — just an amazing surprise. It was so sweet and natural and very romantic," the Suits star said. "He got on one knee." And in A Royal Romance, the film definitely replicates that exact situation, sticking pretty close to Markle and Harry's accounts.

Another major plot point in the movie is that Markle and Harry broke up following the official statement condemning the media's treatment of Markle. There were never official confirmations of any breakup following that statement, so that isn't necessarily accurate, but some of the concerns Markle raises during the argument in the film do have some truth behind them — like the less than ideal relationship with her half-siblings.

One detail of the film that can relatively easily be debunked is the fact that Kate Middleton told Markle about her third pregnancy at Pippa Middleton's wedding. Though this is the way A Royal Romance depicts the events, and though there are reports that Markle was set to attend the wedding reception, the reality of the timeline doesn't add up. Pippa Middleton got married on May 20, 2017, and Middleton gave birth more than 11 months later on April 23, 2018 — so those details seem to have been altered to fit the fictionalized narrative of the movie.

And, the situation with Harry's cousin, Princess Michael, wearing a racist brooch didn't happen how it happened in the film. That became an controversy long after Pippa's wedding, which is when it happens in the movie, and screenwriter Scarlett Lacey acknowledged that. "The brooch incident did not happen where it does in the movie," she said at a press event in Beverly Hills. "But it did happen." Whether Lacey is referring to the brooch incident itself or a conflict between Michael and Harry is unclear, as there are no confirmed reports of Harry directly confronting his cousin about it, though she did later apologize.

The people at work behind A Royal Romance could likely have some grasp on behind-the-scenes knowledge, though, which they might have used to fill in these unknown details. According to Vanity Fair magazine, Lacey is the daughter of Robert Lacey — a historical adviser on Netflix's royal series, The Crown, and someone who's written a biography of Queen Elizabeth. The outlet also reports that she was raised in Britain’s "polo and croquet crowd," and acts as a "de facto royal expert" for the Lifetime film.

And that's not the only connection to the real-life royal family. "My wife's best friend has been dating the press secretary of the palace," the film's director, Menhaj Huda, told Vanity Fair in the same piece. So, theoretically, even the narratives that stray from what Markle and Harry have chosen to divulge publicly could hold some measure of truth. The film also incorporates some well-known aspects of the pair's relationship, including their secret dates in Canada and the controversy over Markle's lifestyle website, according to the same piece, even if Markle and Harry never publicly spoke about them.

The production didn't take any chances on whether or not certain things were OK to include in the film. "In this instance, there are plenty of lawyers going over the script and the movie," executive producer Michele Weiss said at the same press event for the film. She was also adamant that everything about the film comes from a place of respect for Markle and Harry — they weren't trying to make up any scandalous drama that didn't really happen, or paint them in an unfair light.

"We admire the couple, so we hope that if they watch it, they think it's funny and they think it's sweet and they think we hit on this historical importance of the union," she said at the same event. Screenwriter Scarlett Lacey does acknowledge, though, that there were some instances that they filled in the blanks, even while they tried to stay true to reality wherever they could. "I'm really hoping that everyone's gonna watch the movie knowing that, you know, it would've probably been quite boring if it would've been completely truthful, and we have used our imaginations in places," she said at the same panel.

So, as royal fans patiently await Markle and Harry's wedding, A Royal Romance can possibly tide them over for a bit. It gives an intriguing glimpse into the world of a couple, and an institution, that rarely allows the public to know who they truly are. Harry and Markle have quickly become the apples of royal watchers' eyes, following in the footsteps of Prince William and Princess Kate Middleton, and the interest is showing no signs of slowing.

More like this
Morfydd Clark’s Party Trick Is Only Impressive To “People Outside Of Wales”
By L'Oréal Blackett and Maxine Harrison
‘SNL’ Finally Spoofed Nicole Kidman’s Weirdly Beloved AMC Ad & Nailed It
By Stephanie Topacio Long
Jonathan Bailey’s BTS ‘Bridgerton’ Photos Celebrate 6 Months Of “Kanthony”
By Stephanie Topacio Long
Wait, Is Maya Jama Confirmed To Host 'Love Island'?
By Sophie McEvoy
Get Even More From Bustle — Sign Up For The Newsletter