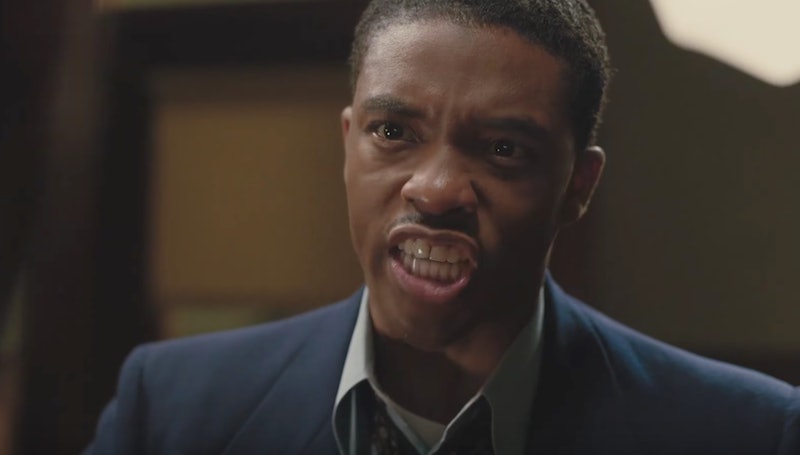 A new film about Thurgood Marshall comes out on Oct. 13, and it surprisingly isn't about either the Supreme Court or Marshall's most legendary case, Brown v. Board of Education. Instead, Marshall features its eponymous character before he became the first black Supreme Court Justice, when he was a young NAACP lawyer in the early 40s. The film, starring Chadwick Boseman, focuses on a case that took place in Connecticut in which a wealthy white woman (Kate Hudson) accused her black chauffeur, Joseph Spell (Sterling K Brown), of rape. So how accurate is Marshall and its portrayal of the 1941 trial? It seems the film gets most of the facts right, but that it also includes a lot of embellishments.

The first big thing to know about the film is that Marshall is actually not just about its protagonist; the movie also heavily focuses on Marshall's partner for the case, Sam Friedman (played by Josh Gad). The case, The State of Connecticut v. Joseph Spell, historically allowed Friedman to take center-stage over Marshall because the trial's sitting judge ruled that Marshall would not be allowed to argue before his bench due to him not being a licensed attorney in Connecticut. Marshall then became a behind-the-scenes coach for Friedman, who had never actually tried a criminal case before.

In this sense, the film is accurate, but it's not necessarily a representative movie about Marshall's courtroom prowess for which he's known. Still, the way that Marshall situates the plaintiff, Eleanor Strubing, as a supposed victim is accurate, as are the film's scenes showing how the event's tabloid frenzy revealed the depth of the racism present in Connecticut. Some aspects of the film, however, received a Hollywood treatment to make the movie more entertaining. As director Reginald Hudlin told Variety, "It’s a thriller, not a biopic, about an early case of one of the greatest lawyers in American history."

The events on which the film is based didn't necessarily need any enhancements to make them more captivating for audiences, though. Joseph Spell's case was sensationalized enough in real life, because trials based on such overt racism (Spell was — spoiler alert — found not guilty) were uncommon for northern cities at the time, and Strubing was a well-known socialite. The film focuses more on racial tensions than it does on Marshall, and when it does showcase its lead, it veers away from the expected approach, giving Marshall a cocky, aggressive persona.

Even if Marshall's overall depiction of the titular historical figure sells him short, the film's overall representation of the case was accurate. The violent uproar that followed Marshall and Friedman's defense of Spell provides an unflinching look at the racism that actually did pervade the 1941 case and how easy it was for white people to rely on those racial prejudices for personal gain. It's true that (spoiler alert!) Spell and Strubing engaged in consensual sex, and the film revealed the accurate revelation that Strubing had lied about Spell raping her because she feared that her husband would learn about her affair.

Marshall is an important story to see right now, as it gives true historical context to the U.S.'s racism and anti-miscegenation that existed throughout the country — even in the regions in which racism was not viewed as a prevalent problem. The fact that films like Get Out, set in present day, feature similar themes to Marshall suggests that things have not changed as much as people would like to believe, and the events surrounding The State of Connecticut v. Joseph Spell may not be as unique to 1941 as people would like to believe, either.