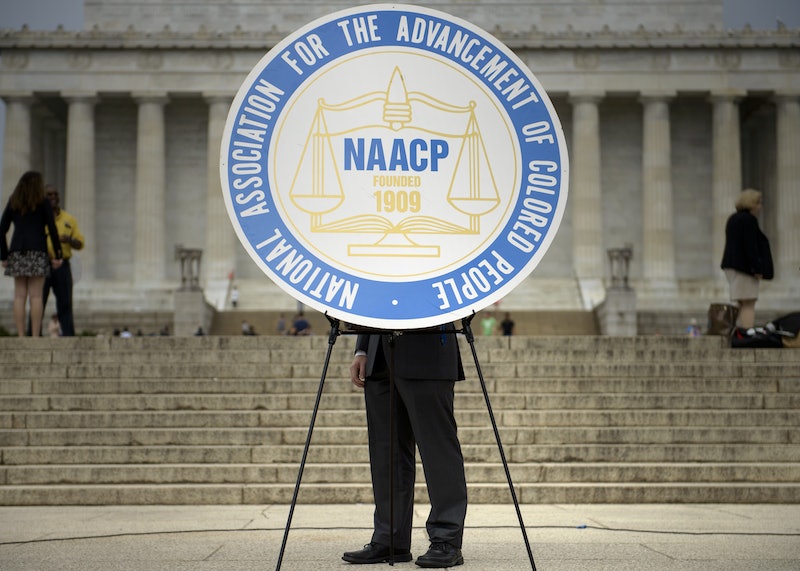 The recent scandal surrounding Rachel Dolezal, the former NAACP chapter president for Spokane, Washington, should not distract from the organization's mission. It's one of the largest African American civil rights organizations in the U.S., and it's been around since 1909 helping to organize some of the most instrumental public protests and political conversations in the fight for equality. There are a number of reasons why you should donate to the NAACP so the organization can keep doing its important work.

The NAACP helped support and orchestrate Brown v. Board of Education, which was one of the most important Supreme Court cases for black equality, according to George Washington University. In 1954, the justices unanimously ruled that using separate educational facilities for black and white students was "inherently unequal," and the ruling lit the first fire that later became the civil rights movement. Even earlier than that, in 1917, the NAACP organized the largest civil rights' protest in U.S. history. An estimated 800 children led 10,000 silent marchers starting on 59th Street and Fifth Avenue in New York. The marchers held signs that read, “Mr. President, why not make America safe for democracy?” and “Thou Shall Not Kill," to highlight the importance of stopping lynching, Jim Crow laws, and violent attacks against black people, according to Femi Lewis, writing for About Education.

A scandal like the one surrounding Dolezal and her race doesn't undermine the NAACP or the importance of its work, which is why now is as good of a time as any to donate to the organization. Here are three reasons why you should donate to the NAACP now.

1. The NAACP Is Helping Minority Voters Register During An Important Time

In the last five years, more states have been passing voter ID laws, which require anyone voting to have valid identification before they can vote. In some states, the laws also stop same-day registration. This might seem harmless, but opponents of the laws say they disproportionately affect students, the elderly, Hispanics, poor Americans, and black people, according to The Washington Times. In many small towns, these minority populations either can't afford cars, so they don't have licenses, or their licenses have expired and there is no need to renew them.

Many states with large universities or high numbers of minorities that may vote for Democrats have started passing laws requiring voters to have IDs under the claim that it helps prevent voter fraud, which conservative legislators have claimed is rampant across the U.S. The Brennan Center for Justice found that voter fraud is actually "very rare, voter impersonation is nearly non-existent, and much of the problems associated with alleged fraud in elections relates to unintentional mistakes by voters or election administrators."

Passing laws that makes it harder for certain populations to participate in democracy will only hurt those populations, so the NAACP has been working to fight voter ID legislation, support election day registration, voter centers, and reforms such as the voter verified paper ballot. This is a big deal, since we're counting down the months until the 2016 presidential election.

2. It's One Of The Most Powerful Organizations Fighting For Climate Justice

According to the NAACP, race — over class — is the number one indicator for the placement of toxic facilities in the U.S. For example, the NAACP's climate justice website says poor, black communities in West Virginia are breathing toxic ash from mountaintop removal. Further, factory meat farms around the country produce toxic fumes and waste that affects the health of surrounding communities, which are often poor, black, and have some of the lowest voting rates of their respective state. If you want to see these problems addressed equally, regardless of race or income, then you should donate to the NAACP.

3. The NAACP Is Leading The Way In Criminal Justice Reform

If you were emotionally affected by the stories of Tamir Rice, Michael Brown, Walter Scott, or any of the other unarmed black people who died at the hands of police, then you should check out the NAACP's work in criminal justice reform. Further, if you read Kalief Browder's horrifying story of being detained on Rikers Island without a trial for three years, then you should donate to the NAACP's work.

The NAACP is working to downscale prisons and shift resources from prisons to education budgets, eliminate mandatory minimum sentences for drug offenses, and advocate for treatment instead of incarceration for non-violent offenders, who make up the majority of the prison population. The NAACP is doing grassroots work that is fundamental in reshaping the justice system and how it disproportionately mistreats minority populations.