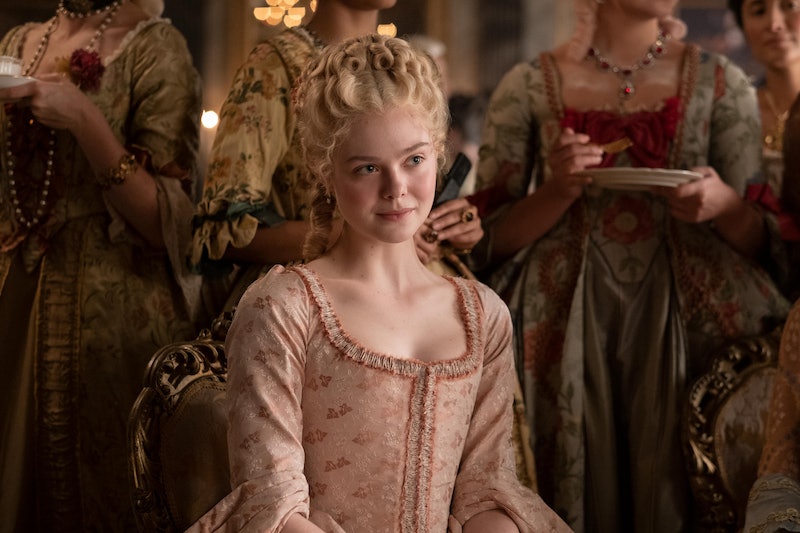 Featuring a pet bear, banned beards, and a mummified queen, Hulu's The Great follows Catherine II (Elle Fanning) as she plots to overthrow her husband, Russian emperor Peter III (Nicholas Hoult). But don't go into the show expecting a realistic account of their turbulent marriage: The Great tells you how accurate it is upfront, with an asterisk on the title card that states it's only "an occasionally true story."

The basic historical outline is there: in 1745, Princess Sophie of Prussia traveled to Russia, wed Emperor Peter III, and was rechristened Yekaterina (Catherine). Her marriage was loveless, and six months into Peter's reign, Catherine forced him to abdicate his throne in a bloodless coup (he died mysteriously shortly afterward). Dubbed Catherine the Great, she reigned for over 34 years, and to this day is considered one of Russia’s most influential rulers.

Many details are different in Hulu's adaptation, though. For one thing, Peter was not an emperor when they got married, and he and Catherine were together for 16 years before he even took the throne. Peter also didn't have a mummy on display, but it's true that their marriage was an unhappy one. Read on for the other major liberties The Great took with real history — and what it kept the same.

The Circumstances Of How Peter & Catherine Were Different

In The Great, Catherine is brought to Russia because a priest had a vision of her. In reality, Peter's aunt was Empress at the time, and she forced Peter to move from his home in Sweden and arranged the marriage for him. Catherine was actually Peter's second cousin, and she had no romantic views of him when they first met; she had already met him years earlier and disliked him instantly.

Catherine Really Did Read That Much

Catherine may feel like Belle from Beauty and the Beast, but her depiction as a passionate book reader is true to life. Catherine had little to do during her 16-year marriage to Peter "except please the empress and stay out of trouble," Virginia Rounding, author of Catherine the Great, explained to Time. So Catherine spent a lot of time reading, and became well-versed in French philosophy, the Russian language, and the ins and outs of statecraft. Essentially, she trained herself to be a better political leader than her husband.

It's Unclear If Peter Was That Cruel To Catherine

It's unclear if Peter was truly as much of a boor as he's portrayed as in The Great, because most of what's known about him is from Catherine's own memoirs. Per Biography.com, she depicted Peter as an "idiot and a drunkard, prone to brutal practical jokes and interested only in playing soldier."

It was hinted that Peter was a poor student who was obsessed with military tactics and had little love for Russia because he grew up in Sweden. He did leave Catherine on their wedding night to party with friends, though, and had as many lovers as Catherine did. There's no record of him ever killing her bear, but Catherine did allege that Peter killed a mouse in front of her. There's no evidence that he tried to drown or beat her.

Catherine Had Many Lovers — But Not One Named Leo

Catherine's suave and educated lover, Leo, is a fictional character. He seems to be an amalgam of several of Catherine's lovers, like Sergei Saltykov, Stanislaus Poniatowski, and Grigory Orlov.

Marial Is Based On A Real Person

Catherine's sarcastic confidante Marial (Phoebe Fox) is very loosely based on Catherine's real lady-in-waiting, Maria Choglokova. Thanks to Peter, Maria never fell from nobility, and according to Catherine'e memoirs, she answered more to Empress Elizabeth than to Catherine.

In The Great, the portly military captain is obsessed with Catherine, and in one scene tries to sexually assault her. He's not a real person, though he may be based on Grigory Potemkin, who was the actual lover of Catherine.

But according to Richard Corson's Fashions in Hair, Peter's grandfather (his father in the show) Peter the Great did have a beard tax to help pay for the Great Northern War, and he allowed the police to forcibly shave those who refused to pay.

Peter Was A Pretty Inept Leader

It seems like Peter's character in The Great is mostly meant to lampoon Donald Trump; in reality, some of Peter III's decisions would be considered progressive by today's standards, like religious freedom and making the killing of serfs illegal.

Still, professor Isabel de Madariaga wrote in A Short History of Catherine the Great that Peter was pretty inept compared to Catherine. "Though not stupid, he was totally lacking in common sense, and he quickly set about alienating all the powerful parties at court," Madariaga wrote. He started a seemingly pointless military campaign against Denmark, alienated the Orthodox clergy by attempting to take over church lands, and even tried to marry his mistress.

Catherine Did Work With Orlov

Orlov was one of the key players in helping Catherine overthrow Peter. He wasn't an awkward, nerdy politician though; historical texts describe him as a dashing artillery lieutenant. Catherine and Orlov were also lovers.

Ultimately, Catherine did achieve what she set out to do in The Great: women's education and art thrived under her rule. But the show paints her as more pacifistic than she really was. In reality, Catherine was a successful military leader, and her troops conquered a great deal of new territory. Still, her life was remarkable one, and to this day her rule is considered to have ushered in the Golden Age for Russia.