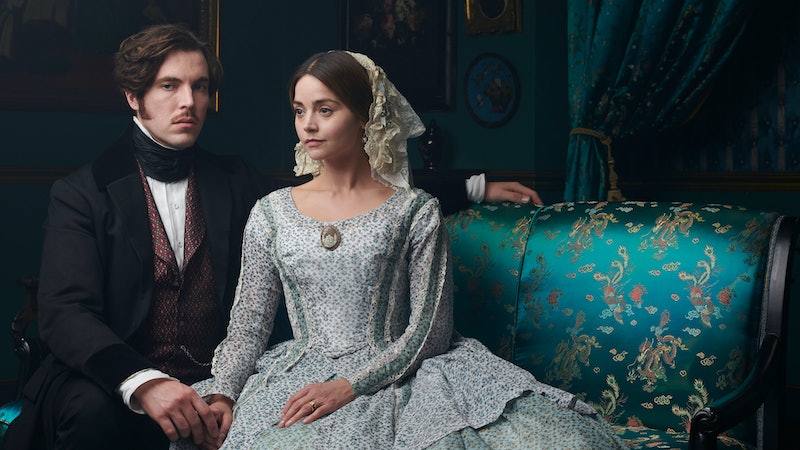 The U.S. may have got there first, but it's finally time for the UK to enjoy the third season of historical drama Victoria. Over the past few years, Jenna Coleman and Tom Hughes have gripped audiences in their roles as Queen Victoria and Prince Albert. The new season will begin in 1848 with a heavily pregnant Victoria and a Chartist movement that threatens to remove the Queen from her throne. But just how accurate is Victoria Season 3?

The creator of the show, Daisy Goodwin, has described the time period as "a hugely dramatic and eventful time for both the royal family and Europe with revolutions on the continent and uncertainty around the monarchy." She added to Good Housekeeping that viewers "can expect more drama than ever before."

It's difficult to dive into the accuracy of the new season without revealing spoilers. But Goodwin has previously spoken about the level of fact versus fiction in the series. "My challenge in Victoria is always to keep the balance between drama and accuracy," she told the Radio Times. "My rule is that I can change the odd date, move people around here and there, so long as I am faithful to the emotional truth of the characters."

As Time reports, the series has previously been criticised for its historical inaccuracies. For example, Victoria suggested that the Queen was in love with Lord Melbourne; something that historians have since described as highly unlikely. Experts also believe that Victoria did actually fall in love with Albert pretty quickly despite the series' storylines.

Goodwin based much of the series on the monarch's personal diaries. "She was a prolific diarist. She wrote almost every day, writing 62 million words!" she told History Extra. However, she noted that Victoria's own admissions couldn't be relied on completely, stating: "[Victoria] also knew that her mother might read them, that her governess might read them — later she thought that Albert would be reading them, so they weren’t entirely frank."

When it comes to Victoria and Albert's lives, Goodwin believes the series is "pretty close" to real life. She admitted to History Extra that she does create "a dramatic story" for some characters but tries to ensure that "the drama is inspired by real events, whether they are assassination attempts, the repeal of the Corn Laws, or the terrible potato famine. All the big building blocks of the series are true."

If you want to know exactly which Season 3 storylines are real and which have been dramatised, PBS has enlisted the help of Goodwin. The American broadcaster has an episode-by-episode rundown of the facts and states that the season premiere is pretty much factual while a couple of fictional elements appear in the second episode. Obviously, you will be met with spoilers if you read it before watching the series. You have been warned.

One factual part that is set to be touched on in the third season is Victoria's feelings about motherhood, reports the Radio Times. Viewers have already witnessed the Queen's dislike of pregnancy and her thoughts on giving up certain responsibilities to be a mother. The new season will reportedly explore the possibility that the Queen refused to have sex with Albert to avoid having any more children.

Clearly, this way of thinking (if true) didn't last for long. At the beginning of Season 3, Victoria is expecting her sixth child. At the end of her life, she had nine in total.