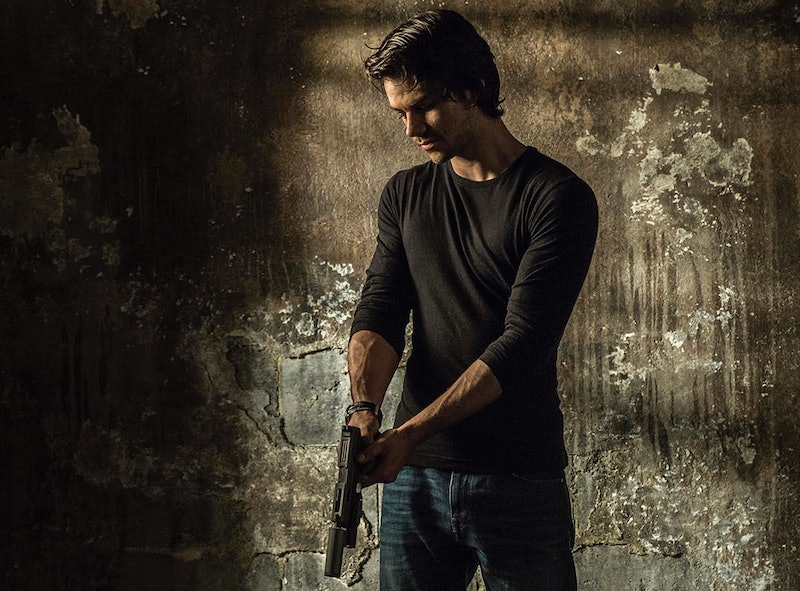 There's a troubling trend gaining traction in Hollywood. The number of on-set accidents and deaths during what should be safe stunts have spiked in the last few years on both TV show and movie sets (The Walking Dead, Deadpool 2, American Made, to name a few), and Dylan O'Brien is no stranger to this horrific — and ultimately preventable — occurrence.

The Teen Wolf star suffered his own major on-set accident while filming the third Maze Runner film in the franchise, The Death Cure, back in March 2016. O'Brien was thrown from a moving vehicle and struck by another car during filming, resulting in injuries so severe that production was shut down indefinitely after initially being scheduled to resume in May. The 26-year-old actor spent the next few months in serious recovery, staying out of the spotlight and focusing on healing. The first time he was spotted out in public after reports of his accident were released was five months later as he began training for American Assassin (in theaters Sept. 15), his first project after the Maze Runner incident.

Sitting down with O'Brien during the American Assassin press junket in Los Angeles at the end of July, the TV-turned-movie star revealed that he wasn't sure that returning so soon to an action movie franchise was the right call in his recovery. But he took a chance and ended up realizing that American Assassin was actually exactly what he needed.

"Part of the reason why I took the role is because it was a challenge as an actor and something I hadn't quite taken on before, a little older of a character, playing more of a man, age-wise at least, than I had been playing," O'Brien said, sitting with his legs crossed next to me on the couch in a Four Seasons hotel suite. "But personally for me, it was a journey. This movie was really big for me in getting back on my feet."

Going through intense combat training to take on the character of CIA operative Mitch Rapp from Vince Flynn's New York Times' best-selling novels was "not easy to do at all," according to O'Brien, both physically, mentally and emotionally.

"Everything in my body was fighting it," he said as he looked down at his hands, his voice shaking a little as he remembered the early days of his recovery. "You're afraid to go back to something like that. I'm really glad that I pushed through and did it, because ultimately it was the best thing for me. I'll always be so grateful for what this was for me in my recovery and my personal life. [I'm] really proud that I did it and got through it. That was probably the biggest challenge."

Before his accident, O'Brien never questioned the safety of stunts he was asked to perform. And while he has "put that experience behind" him, after suffering through and healing from his serious injuries, he looks at action scenes and stunts during filming in a much different way now.

"They're not mutually exclusive," he said. "I've done a lot of work to put it in the past and process what happened and accept what happened and get through what I went through, too, in the recovery period since. But at the same time, I'll never approach stunts like I did before the same. That's just absolutely something that's innately changed in you. Safety is just much more at the forefront of my mind now, as is should be everyone's on a set."

Going through that experience has made O'Brien an advocate for safety on sets, and it's clear from Hollywood's continued streak of injuries and deaths during stunts that his work is far from over.

"There's no reason in doing what we do and making films that anybody should get hurt or have an accident that was as tremendous as that one," O'Brien said. "There's a way that things are meant to be done, and I understand those ways now. I'll never let myself be put in a position like that again, absolutely. I definitely just don't go right back to, 'Jump.' 'How high?' You know? I'm very much more meticulous about it now and always will be."

Finding a silver lining in the outcome of his accident, O'Brien was able to spend a lot of time during his recovery getting ready for the hopeful American Assassin franchise — so much so that he felt more confident taking on the role of the CIA hit man than he ever had in any other role.

"I had the most prep time for this movie that I've ever had, but that was in part because I was in recovery for a long time," he said. "So it was just in my head for a while. I've always been jumping project to project; I've never really gotten a full eight weeks to train like I did on this and really get into the role and figure out how I wanted this character to look."

He went on to describe how he even had "very specific reasons why" he gave Mitch Rapp long hair and a grown-out beard, and was able to dig deeper into the character that way. "I did have just a long time to sit with this character in my head and really do my prep, that by the time I showed up on set, it really was the first time that there wasn't an ounce of winging it," he said. "I felt like day one, I was like, 'Man, this feels really good. I'm so happy to finally be on set, breathing life into this guy that I've spent so much time thinking about.' It was cool. It was a good prep period."

Talk about an unexpectedly happy ending to what could have been a much more tragic outcome. It's amazing to see how far O'Brien has come in the year after his accident, and if anything, hopefully his story can prevent any more horrific on-set accidents from happening.

More like this
At 28, Rosie Perez Risked Her Career To Stop Playing Stereotypes
By Gabrielle Bondi
'That '90s Show' Star Callie Haverda Got Advice From Mila Kunis & Ashton Kutcher
By Brad Witter
At 28, Debra Jo Rupp Was Living A Much Different '70s Show
By Grace Wehniainen
Zach Reveals The Chaotic 30 Minutes That Were Cut From ‘The Bachelor’ Premiere
By Grace Wehniainen
Get Even More From Bustle — Sign Up For The Newsletter
From hair trends to relationship advice, our daily newsletter has everything you need to sound like a person who’s on TikTok, even if you aren’t.