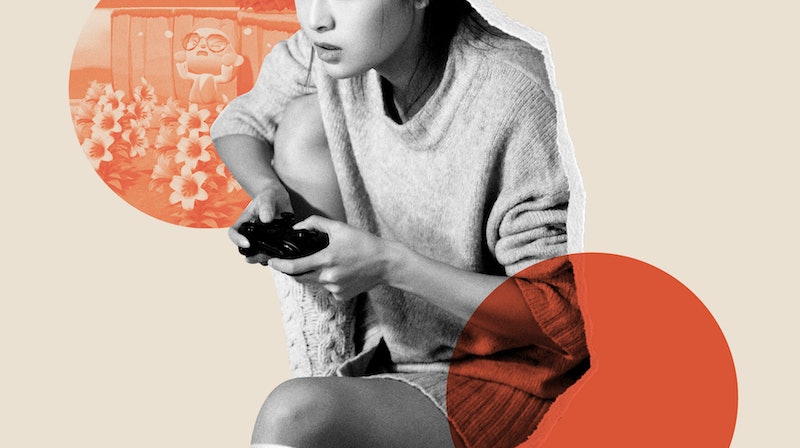 I’m four hours into gameplay, far more sweaty than I’d like to admit, and my eyes are beginning to sting from exhaustion. As someone who’s been playing video games for 21 years now, I’m used to this feeling. But never did I think the source of my anxiety would be trying to create a fountain feature in the middle of a digital town. For the first time since landing on my Animal Crossing island, I cast my Switch aside to consider my virtual life choices. You’d think the freedom of building your own paradise from the ground up would be a relaxing process, but thanks to Animal Crossing’s surge in popularity, island living has become more akin to a high stakes rat race.

For those unfamiliar with Animal Crossing, the basic premise is this: players move to a leafy town inhabited by an array of anthropomorphic animals ranging from flamboyant anteaters to adorable puppies. The aim is simply to design and build a space that you can enjoy and others can visit and to take part in various activities (fishing, bug catching, and other pastoral pastimes).

In early iterations of the game (it first came out in 2002), the town you arrived at would be partially pre-made, with only a few things available to customise like the interior of your home or clothing designs. Escapism at its finest. However, in Animal Crossing: New Horizons, the latest (and most popular) title, the concept has changed. Players are now sent on a ‘Deserted Island Getaway Package’ courtesy of Nook Inc. (a development company founded by tycoon racoon Tom Nook) where they are asked to design and build their home from scratch.

For the first time since landing on my Animal Crossing island, I cast my Switch aside to consider my virtual life choices.

Launched in the middle of a world-wide pandemic, New Horizons is the gaming world’s equivalent of Disney+ or Normal People. In other words, its release couldn’t have come at a more convenient time. For those stuck in lockdown, the game offers a perfect opportunity to (virtually) venture outside and meet up with friends without having to worry about social distancing measures, as players can interact with other players on their computerised islands. As Christopher Ferguson, psychology professor at Stetson University puts it, games like New Horizons “are a great way to maintain social needs and also to get a feeling of autonomy and control in a fictional universe when those needs are hard to meet in real life.”

As a result, digital sales of the game have skyrocketed, with nearly 12 million copies sold in 12 days. New Horizons has already superseded the lifetime total of sales for any other Animal Crossing game, making it “the fastest-selling Switch game to date,” per Eurogamer.

However, while having a whole host of new players has its benefits (more people to interact with and more design codes to borrow, for example), it’s also beginning to change the very fabric of the game OG players have come to know and love. A new sense of competitiveness has crept in, overtaking the feelings of peace and serenity our islands once offered.

The competition to have the best-dressed island has become so fierce that brands unrelated to Animal Crossing are offering their services, including online home decor brand Olivia’s, who have assembled a team of “Virtual Interior Design Consultants” to help struggling players. By visiting islands, providing feedback and suggesting tips in real time, consultants can help players “transform [their] ordinary space into a digital luxury retreat.”

Potential consultants need a “working knowledge of Animal Crossing: New Horizons” and “strong communication skills.” And while it is beneficial to have previous experience in interior design, it’s not essential. It’s unclear how much hiring a consultant costs, but the brand notes that successful consultants “will get paid upwards of £40 an hour for their services when hired,” and are then given the opportunity to set their own rates.

A new sense of competitiveness has crept in, overtaking the feelings of peace and serenity our islands once offered.

As strange as hiring an interior designer for the game sounds, all you need do is scroll through Twitter to understand the kind of perfection players are confronted with. Take @clara_kiwi, whose beautiful hedge-lined courtyard garnered more than 40,000 likes.

Underneath are hundreds of comments with people complimenting Clara’s stunning design and explaining how it’s inspired them to recreate something similar. But some commenters also share their disappointment about their island looking nowhere near as polished. “Stuff like this makes me so insecure LMAO I don’t have the creative prowess for this,” writes one. Reading through, the reaction feels more like something you'd find on an influencer’s Instagram page than a comment section full of of video game enthusiasts. But this is just one of countless examples of Animal Crossing anxiety writ large.

“No one is exempted from feeling envious of how other players are progressing, especially with terraforming [the ability to create cliffs, paths, and rivers] and landscaping in general,” player @shizunomori explains to me via Twitter DM. @Shizunomori has amassed over a thousand followers from her Animal Crossing gameplay on Twitter. “Every player has offered unique ideas and it’s understandable to feel envious. Sometimes I feel discouraged when I compare what I have to offer compared to others.”

And @shellcityshea, who has been playing Animal Crossing for fifteen years, agrees: “At first we were all on the same page with the same struggles, but once people figured out the loopholes in game, it suddenly became a race to see who could ... design their entire island.”

Speaking about these kind of behaviours, Dr. Sarah Evans, Assistant Professor of Digital Humanities and New Media at Molloy College says: “Any game can be made competitive if the right people get a hold of it and there is a community who is interested in sustaining the practice.”

She continues: “Animal Crossing is a game where we live out the luxurious lifestyles that many of us never will achieve otherwise. Cultivating an impressive virtual space that we can show off to others when we have little else of difference to share online seems to fit into our established social media sharing practices.”

One character is creating something of an uprising on social media.

Aside from building your town, another ‘objective’ in Animal Crossing is to find villagers to visit your island and eventually become your neighbours. You can only have up to 10 living on your island at one time, and there are 393 villagers in total — so finding your fave villager can be a feat in itself. Out of the eight new villagers introduced in New Horizons, one character is creating something of an uprising on social media. Raymond – a grey cat with heterochromia – is so popular in fact that some players have gone as far as harassing those who have him via social media, saying that they “don’t deserve him.” (Others are obsessed with "sending him to the void" – a plane of non-existence where villagers wait in before they move to another neighbourhood – but either way, the frenzy is real.)

Popular characters like Raymond have also been popping up on Discord and other chat apps where people can bid on them for copious amounts of in-game currency. And that’s just one tiny part of the Animal Crossing “black market” that is now emerging. Two weeks after New Horizons was released, one player set up Nookazon, a site dedicated to the buying and selling of items and animals available within the game. As Mashable reports, critics of Nookazon have accused it of “turning the beloved game into a greedy, capitalist nightmare.”

Sites such as Nookazon are fuelling the fires of competitiveness.

As a long-time player of Animal Crossing, it’s hard to disagree with those accusations. Sites such as Nookazon are fuelling the fires of competitiveness and undermining the slow, hard-won gratification players should feel after hours of honest work on their island. What began as an outlet for escaping the trappings of modern-day society has morphed into something not too dissimilar from it.

In 2013, series creator Katsuya Eguchi told gaming site Gamasutra that your Animal Crossing town should be “something that you want to show off to people” but it should also be a “reflection of your values.” It appears that his intention was to create a space where people could feel supported, creative, and proud of what they’d achieved, not downtrodden and undeserving.

So where does that leave us?

There are ways to still enjoy Animal Crossing despite the new persona it has taken on. By limiting your time on social media and blocking out the toxicity over certain aspects, seeing other people’s islands can be utilised in a positive way. “I only check social media every now and then purely for ideas when I have enough Bells to decorate a new area of my island,” @HayleyfromNZ tells me, who started her New Horizons journey just recently, in April. “Then it feels like I’m being productive and achieving goals rather than just watching and seeing other islands that are better than mine.”

Professor Ferguson suggests “simply avoiding” any of the competitive spaces associated with the game. “Try to refocus on the story you're telling for yourself within the game rather than on external features like achievements, trophies, etc.”

"Try to refocus on the story you're telling for yourself."

If that feels impossible, try to enjoy the artistry you are seeing in others’ islands. The level of creativity from players with “no formal design training” has also wowed architect Sandra Youkhana, co-founder of You+Pea design studio and Videogame Urbanism. “It’s inspiring to see players of all ages build such intricate home interiors, surrounded by complex infrastructures and landscaping.” Youkhana herself has created a very personalised island, using a recent trip to an Onsen (a hot spring) in Japan “as a way of connecting back to a fond memory.” In a world where you can create anything, why not create a space that makes you happy?

As for me, the fountain has been built. And I’ve planted a bamboo garden right nearby. They may not be “perfect,” but that’s fine. Seeing it always makes me smile, especially when my favourite villager Lucky sits in that little sanctuary on his own accord. He’s oblivious to all the stress and anxiety that originally went into that area, he’s just happy to have somewhere relaxing to perch for a bit. It’s a pertinent reminder about why I started playing this game in the first place.