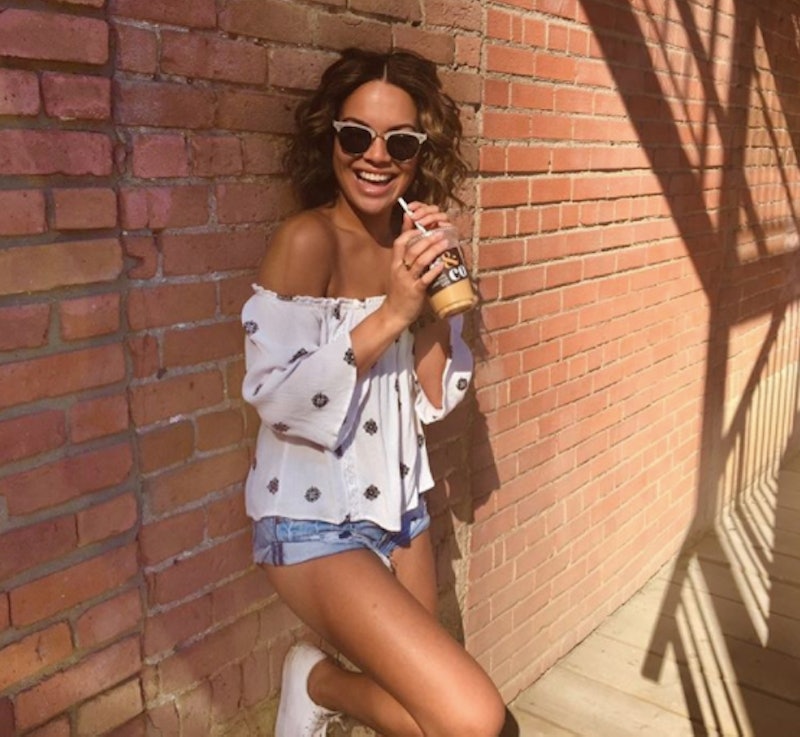 Something historic happened Monday night on the Feb. 13 episode of Jimmy Kimmel. Not only did Bachelor Nation break protocol and announce the crowning of the next Bachelorette before said Bachelorette had even seen her hometown date with Bachelor Nick air on television (a shock for anyone who's been following the show for years), the series also finally caught up with the times, by naming Rachel Lindsay as the first woman of color to lead a season of The Bachelorette.

Many members of Bachelor Nation flocked to Twitter to offer their congratulations to Rachel, who's stolen America's heart (though clearly not Nick's) during the 2017 season of The Bachelor. And adding to the jubilation is former contestant, Jami Letain, from Ben Higgins' Bachelor season, who has a few ideas about how the casting will change the series for the better. Here's her take, as told to the hosts of Bustle's Will You Accept This Podcast, Allison Piwowarski & Kelsea Stahler.

From night one, I knew there was something I liked about Rachel. The way she speaks shows that she’s so educated and she’s not just book smart, but you can tell she's people smart too. And now, she's the first black Bachelorette and it is just so awesome, especially right now. We kind of needed this in 2017.

Plus, there's the chance that Rachel can bring positive change to the show. I think that it’s going to open it up to being more multicultural and diverse, in general. When you look at some of the past seasons, the setup is the same: the typical American dream with the blonde-haired, blue-eyed girl gets her guy. And while the people who've been on this show are all beautiful and amazing, I think the series can show the audience more in order to show the rest of the world that we're not just one thing.

So many people in so many different countries watch the U.S. version of The Bachelor and The Bachelorette. The U.S. version is where it all started, so if this version embraces diverse viewpoints and contestants from different backgrounds, that change could be reflected in those other, international versions of the show. It's nice, someone who maybe didn't see themselves as a potential contestant could say, “Hey, I could have been on the show too."

But that's all hypothetical. In real time, Rachel is already changing things by revealing her role weeks before anyone expected. Now the anticipation of the rose ceremonies on Nick's season have like dwindled a little bit, though we do want to find out what happened in his relationship with Rachel — why it ended and sent her on her own journey. So my hands are tied; I'm still so interested, even though the anticipation heading into the Women Tell All and After The Final Rose isn't quite the same.

Instead, I’m looking to Rachel and the new season to see how they are going to top past ones. It’s the equivalent of Beyoncé after she performs and it's amazing and you’re like, well, what’s going to happen next? So here's to what happens next for Rachel on The Bachelorette.