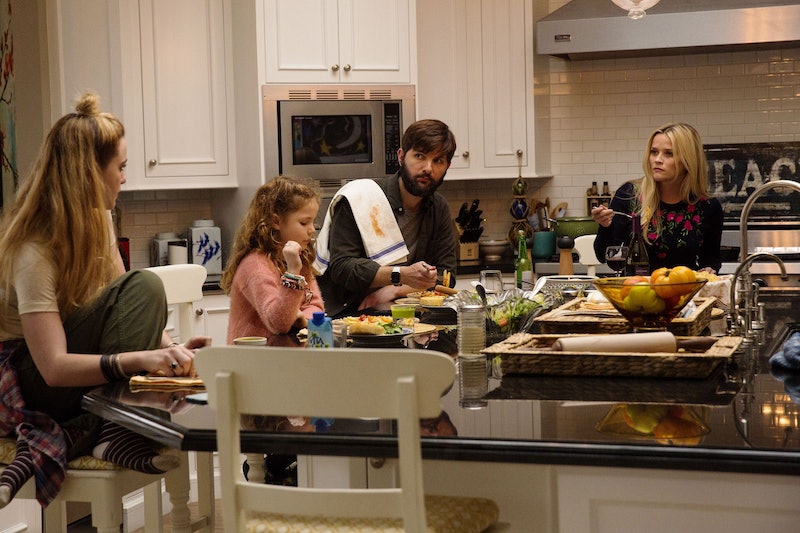 Big Little Lies' title sums up the HBO show perfectly: it's a combination of the mundane (suburban trivia nights, elementary school squabbles) and the dramatic (secret affairs, domestic abuse, murder... you get the drift). That spot-on balance is what makes Big Little Lies, whose second season premieres June 9, so notable; even when the intensity is sky-high, the show never strays from reality. And much of that, explains Production Designer John Paino, is due to the way BLL's sets are designed, as the show's locations are chosen because they represent both characters' emotional arcs and standings in society.

"It’s not the kind of show where everything is supposed to look posh and unrealistic," explains Paino, adding with a laugh: "Nothing feels outside of reality at any point — just good-looking."

The designer — who's also worked on other HBO series like Sharp Objects and The Leftovers, as well as Big Little Lies star Reese Witherspoon's upcoming Apple News comedy The Morning Show — walked us through how he and the team chose five of the show's most memorable locations and made them feel true to the characters' stories.

Many rooms in the home shared by Madeline, Ed, and their children fits their personalities, but the large, modern kitchen — the real interior of the nearly $15 million Malibu home chosen by the BLL crew — features bay windows, three ovens, and plenty of seating, and is the true centerpiece.

"Madeline is about her family," says Paino. "She’s very much about having everyone together for dinner and talking about what went on today... and to have a big, communal kitchen with a giant island is big for her."

The kitchen's design also emphasizes Madeline's desire to be as "rich and successful" as her peers, Paino adds: "She’s the one who’s the most ostentatious, in an upper middle class way. Her thing is that she’s always trying too hard. So the kitchen is over the top for her family — a kind of pretentiousness."

The enormous walk-in closet — a set built by the BLL team, separate from the real $6 million Monterey home used for exteriors — shared by Celeste and Perry has everything: gorgeous lighting, space for hundreds of items, and an art-covered glass table in the middle of the room.

"[Celeste and Perry] have more sophisticated taste than Renata and Madeleine, so everything in there is serene and balanced, and just a bit much," says Paino of the closet.

Yet while both the closet and house overall are "gorgeous," says the designer, the most notable element is the home's isolated location, which emphasizes the hidden abuse occurring in Celese and Perry's home. "It has a sense of being tucked away, whereas Renata’s house, everything is out in the open, showing it off more," explains Paino. Speaking of Renata...

Renata's palatial home — a $12.4 million Malibu mansion previously featured in shows like Revenge and Brothers & Sisters — is the most stunning of all the Big Little Lies houses, set high upon a hill overlooking the town.

Renata "is about big expressions," says Paino. "If [Celeste] is more glacial and sophisticated, Renata is more balls to the wall, and everything in there is oversized…. it’s not that it’s gaudy, everything is just big and stagey, and I think that goes well with her character, because she is very big and stagey."

The home, with its centerpiece staircase and enormous ceiling-to-floor windows, certainly emphasizes Renata's love for the dramatic. Says Paino, "It looks a bit staged when you stand in it, with the staircase and with the background, like you're looking at a camera."

The show only shot scenes of the outside of the real house (a $520,000 three-bedroom in Pasadena) — Paino and his team built the interiors on a soundstage, designing the home to reflect both Jane's lesser wealth and younger vibe than her peers.

"It’s really about her demographics, that she just doesn’t have that much money," he explains, adding that the team purposely chose a house far from the water to represent Jane's social standing: "Part of the idea with the show is people’s relationships to the water, how close they are, how high they are." With Jane's home, says Paino, "there’s no water, whereas Madeline’s in the middle, and then you have Celeste and Renata at the top" — aka looking down at the water and homes below.

The home's setting was also chosen specifically to reflect Jane's desire to keep herself and her son hidden from predators. "She’s escaping, so it feels secluded," says Paino. Still, the house wasn't meant to feel bare. "We wanted it to have a Boho feel — she’s artistic," the designer adds. "It feels like she's trying to create a home, too. Her whole thing is, 'I want to create a safe place for my son.'"

The school attended by the characters' children, Otter Bay, is actually Kenter Canyon Elementary in Brentwood. The show used both the outside and inside of the school for scenes.

"That particular school worked well for the drive-up portion, which is a big part of the show," explains Paino, referring to the frequent scenes of characters dropping their kids off in the mornings. "It took a lot of work to go through and repaint and change [things] so that we felt like we were in a school in a very suburban, posh place, which is what Carmel and Monterey are."

The design of these Big Little Lies locations has kept the show feeling grounded in reality, no matter what kind of intense drama comes each episode.