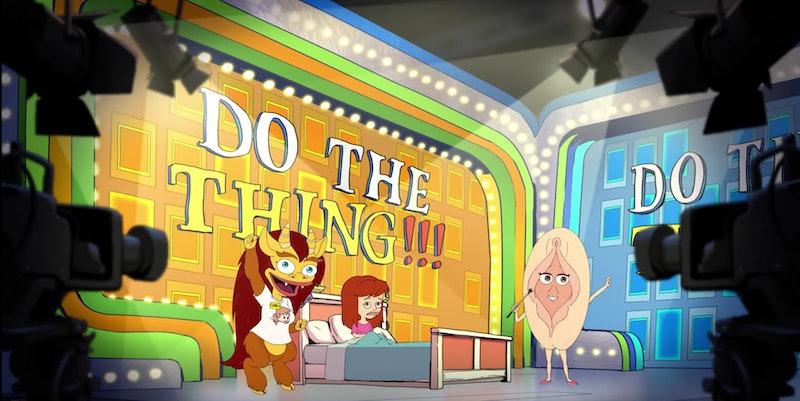 “Maybe I’m just going to be one of those women who can’t have an orgasm,” an exasperated Jessi (Jessi Klein) declares after a few attempts to pleasure herself without an explosive finale to speak of. Big Mouth Season 3 is here, and it features even more incisive commentary on the horror show that is pubescence, from dress code debacles to d*ck pics gone awry. Episode 6, written by Emily Altman and aptly titled “How to Have an Orgasm,” stands out for its skillful depiction of female pleasure and fantasy.

The episode opens on Jessi’s vagina (Kristen Wiig), mic in hand, hosting a game of “Do The Thing!!!” What follows is a lot of experimentation as Jessi tries different masturbation methods and finger work while her animated vagina and her hormone monstress Connie (Maya Rudolph) egg her on. For women, whose pleasure is often shamed or considered taboo, this unfettered focus on the female orgasm proves to be one of the most touching and hilarious episodes of the season. While Big Mouth has always been conscious of the complicated mess that is puberty and how it affects boys and girls differently, Season 3 takes special care in highlighting the unique challenges young women face while discovering their sexuality in adolescence.

“This was the first season we were writing post-#MeToo, so it felt like there was stuff in that space we wanted to talk about,” co-creator Nick Kroll tells Bustle. “When the show started, everyone assumed it was going to be another show about boys jerking off. We tried to show that it was really about boys and girls' experiences.” For episodes like this one, Kroll adds that allowing female writers to guide the brainstorm and story was key.

"When the show started, everyone assumed it was going to be another show about boys jerking off."

“In the case of this episode, we turn to the people that have a connection to the material, listen to their points of view, and [try] to understand what their experience of pleasure and courting was, and try to imbue the episode as much as possible with those experiences,” he adds.

In Big Mouth’s typical style, there is a lot about this episode that is funny, like the fact that Jessi’s vagina has glamorous eyelashes and a post-climax speech card prepared, or that Connie suggests calling orgasms “pussy screams.” Yet woven throughout the pithy one-liners is a pretty comprehensive education in female orgasms, the history of vibrators, and the trial and error that goes along with getting to know one’s body for the first time. The show makes a conscious decision to go beyond the idealized depiction of “first times” as something exclusively sexy and seamless. The idea that young women can reach their first ever climax by sticking a hand under the covers for 30 seconds is simply unreasonable, and Jessi's storyline brings this to light.

Inspired by Bethany, Jessi decides to look into vibrators. As her and Missy peruse the aisles, she works up the courage to ask Missy how she figured out how to orgasm. Missy answers plainly that she has “a glow worm and a bath faucet that really gets the job done.” One of the most striking details in this episode is the use of pleasure aids like vibrators, pillows, faucets, and even plush toys. These are all very common ways that women pleasure themselves, yet they are given virtually no screen time in contemporary media texts. The myths around vibrators desensitizing our vaginas or humping pillows being gross all derive from the idea that it is inherently scandalous for girls and women to put their pleasure first.

“I think so much of the shame we feel as adults was built out of the things that happen to us or we began to experience or feel when we were in middle school and going through puberty,” Kroll says. “These kids are 12 or 13, but there are people in their 20s and 30s who still don’t know what they like, and for girls, it is especially more complicated."

Connie encourages Jessi to continue experimenting, to have a sense of humor about it, and to find a technique that works best for her. The winning combination ends up being a vibrating toothbrush and a vivid fantasy about Nick's older brother Judd (Nick Kroll) taking her on an Indiana Jones-like expedition to a jeweled clitoris that she must rub. In the end, Jessi finally has an orgasm, and with it, a small part of her world is now changed for the better. For young Big Mouth fans, this episode should do the same.