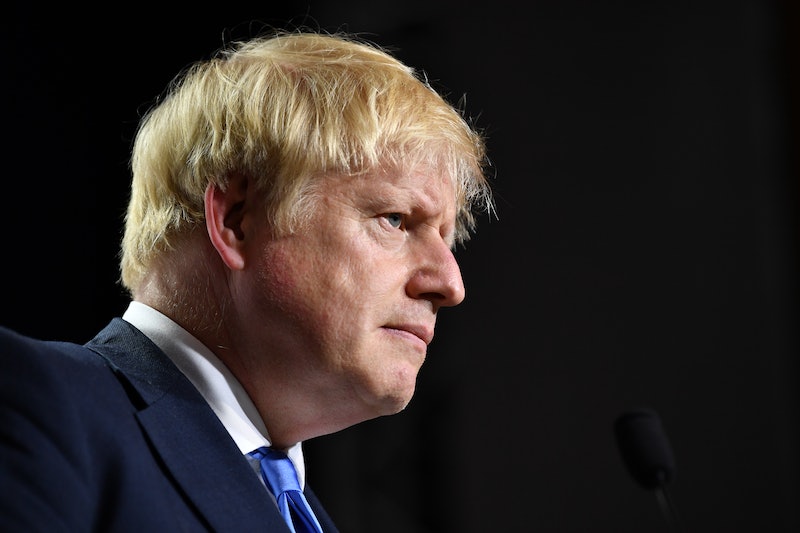 From Sep. 3 until Oct. 14, Parliament will be suspended. The supposed reasoning behind the suspension varies depending on who you ask. Boris Johnson claims it will allow him "to bring forward a new bold and ambitious domestic legislative agenda" in a Queen's Speech. However, the five-week halt has caused uproar among MPs and the public. Some have said such a move is "undemocratic" as it will only leave two weeks before the Oct. 31 Brexit deadline for MPs to debate proposals. But it's not just Brexit that MPs will be unable to debate. Parliament's suspension could also impact the Domestic Abuse Bill.

On Wednesday, Labour MP Jess Phillips shared a letter written to the prime minister. "The legislation which you plan to ditch by closing Parliament down includes the Domestic Violence Bill — is that one of the bills you refer to in your letter as just 'filling in time' in the Commons?" she wrote. "I can tell you it won't feel that way to the women and families this law would have rescued."

Phillips said three years of work had gone into creating the Domestic Abuse Bill, which saw its first reading in Parliament in July. A second reading was expected to take place in September, reports Elle, but there are concerns this could be scrapped under Johnson's new plan.

The bill, seen as one of Theresa May's most important initiatives, is seen as a vital piece of legislation for a number of reasons. The first being that it will widen the statutory definition of domestic abuse to include economic abuse and controlling non-physical abuse.

A domestic abuse commissioner will also be established with the aim of standing up for survivors, raising public awareness, and holding authorities to account. Victims will further be protected in court by banning their in-person cross-examination by perpetrators. And the introduction of domestic abuse protection notices will give police an earlier right to intervene.

While most of the legislation applies to England and Wales, one provision has specifically been designed for Northern Ireland. It will result in a new domestic abuse offence criminalising controlling or coercive behaviour. Northern Ireland's own Parliament, Stormont, has been suspended for over two years.

"We've waited too long and this needs to happen now to prevent further victims," former Stormont Justice Minister Claire Sugden told the BBC. "The Prime Minister talks big about improving people's lives through his fresh domestic agenda and if he means it then he must prioritise this bill."

We’re deeply concerned that months of hard work on vital legislation to protect survivors of domestic abuse could now be thrown out as a result of this sudden parliamentary shutdown. This bill has been delayed at every turn since 2017.

Survivors cannot wait any longer for critical legal protections, and we are urging the Prime Minister to guarantee that he will take the Domestic Abuse Bill forward as soon as Parliament returns. More than a million women experience domestic abuse every year, so time is of the essence.

AVA, a charity committed to ending gender-based violence and abuse, said: "Survivors deserve support and services, and while the country focuses on Brexit, still two women a week are being murdered at the hands of partners [or] ex-partners."

Per Buzzfeed, Home Secretary Priti Patel told campaigners that she was "committed to the [domestic abuse] plans." The Home Office issued a similar statement to BBC News, saying the government was "determined to continue with the work done so far on legislating to support the victims of domestic abuse."

If you have been affected by any of the issues mentioned in this piece contact Women's Aid on 0808 2000 247 or visit the website.