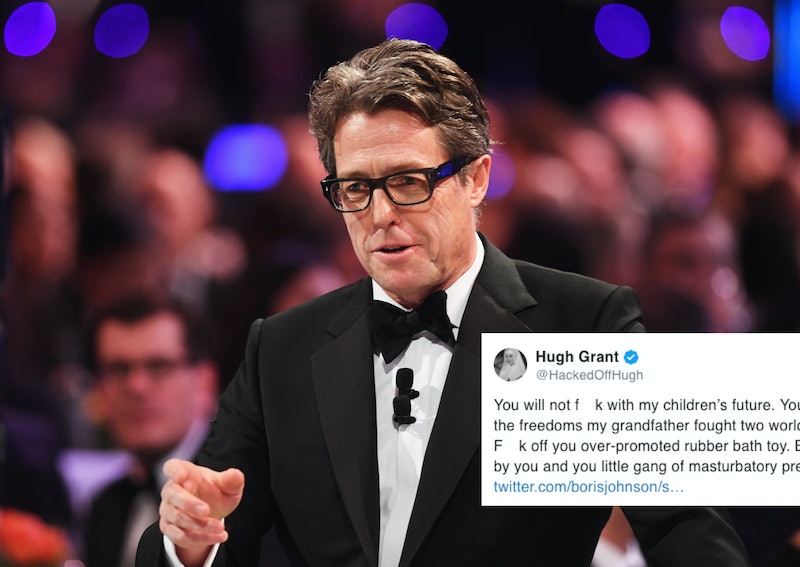 If you’ve been trying to keep up with what’s been going on in parliament over the last week I applaud you. While summer recess is usually a quiet time for MPs, Prime Minister Boris Johnson has been hitting the headlines as yesterday (Aug. 28.) he has suspended parliament for Sept. 2019. However, it was actually a British actor who was trending on twitter when Hugh Grant’s tweet about Boris Johnson went viral. Fans of the actor are loving his political commentary. It’s fair to say that the iconic rom com star is less than impressed with the actions of the Prime Minister and Grant isn't the only prominent figure sharing his opinions on the matter.

Today it was announced that the Queen has backed the Prime Minister's plan to suspend parliament after MPs come back from the summer recess, and it has caused an uproar on Twitter. And not only with the general public, but with celebs too.

Grant took to his twitter to write, "you will not f**k with my children’s future. You will not destroy the freedoms my grandfather fought two world wars to defend. F**k off you over-promoted rubber bath toy. Britain is revolted by you and you little gang of masturbatory prefects." And he got a GIF-based standing ovation from many of his online fans.

One follower replied, “Daaaaaaaammmmnnn. Never knew you had it in you, Hugh. Well said, chap” while another said, “I vote @HackedOffHugh (#HughGrant) for #primeminister ...we all know he can do it.”

Another had a job change suggested for Grant, “so judging by this morning’s trends on Twitter — we’re gonna #AbolishTheMonarchy and replace the Queen with Pres #HughGrant ? This is what Thursdays are like now.”

Many Twitter users began posting snippets for arguably Grant's best ever performance in which he dances around Number 10 in Richard Curtis' much adored Christmas classic Love, Actually. Absolutely iconic.

As well as his tweet, Grant also retweeted a post from activist Femi Oluwole, which said: "This isn't about left, right, centre, leave or remain... This is about ensuring that democracy can never be put on pause when an unelected politician finds it inconvenient. #StopTheCoup."

Grant may have made it as a Twitter moment, the height of social media fame and Twitter admiration, but he wasn’t the only one with views on Johnson's move to suspend parliament. British actress Amanda Abbington wrote, “You lie. You continue to lie. You are a traitor to the emergency services, the NHS, to democracy and to your country.” Additionally, Paloma Faith shared the Don't Prorogue Parliament Change.org petition with the tweet, “Please sign this petition against this ridiculous UK dictatorship.”

In classic poignant style, Stephen Fry wrote: "Weep for Britain. A sick, cynical brutal and horribly dangerous coup d’état. Children playing with matches, but spitefully not accidentally: gleefully torching an ancient democracy and any tattered shreds of reputation or standing our poor country had left."