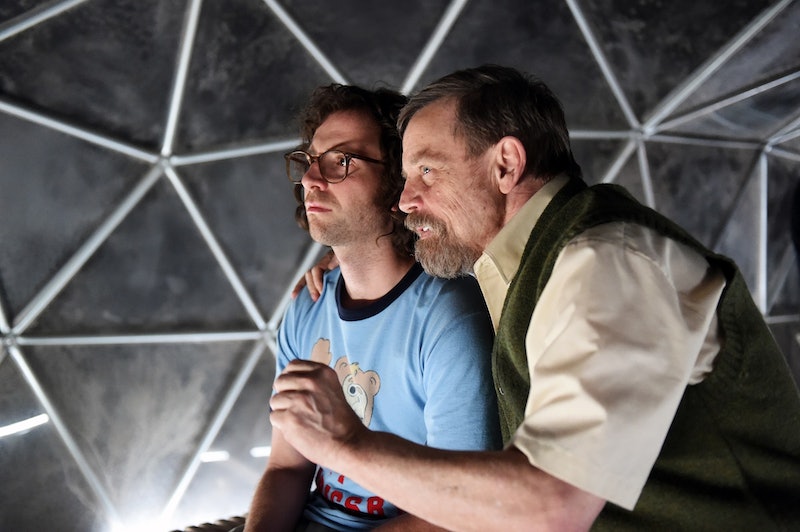 Growing up in San Diego, SNL's Kyle Mooney was a self-described "obsessive kid." He loved He-Man, Transformers, The Beatles, Louie Armstrong, and Saved by the Bell. But above all else, and like so many other children of his generation, he loved Star Wars. Fast forward 20 years, and Mooney is making Brigsby Bear, a bizarre (and wonderful) movie about an adult who is freed from kidnappers he thought were his parents. And who does he cast as his father-cum-captor but his childhood idol, Mark Hamill.

"He did change my life," Mooney says during the Los Angeles press day for Brigsby Bear, sitting on a couch in a dimly-lit hotel room, lamenting the fact that we can't have this interview outside. "But that can't be anything he hasn't heard before."

Yet Mooney and Kevin Costello's script appears to be unlike anything Hamill had read before, and that's in part why he decided to sign on to this oddball indie.

"We were fortunate for a few different reasons. One of our producers knows Mark's daughter, and we had Lonely Island attached to produce, and with Dave and I there’s a Saturday Night Live connection, so we had enough surrounding the project that he would take a look at it," he says, adjusting his glasses. "And I'd like to think this was something different for him. It's not Luke Skywalker."

For Mooney, the entire experience was a dream come true. Not only because he was working alongside his childhood hero, but because it was the first time he got to see Hamill act in a part so dramatically different than what audiences know of him.

"As you can expect, it was awesome," the 32-year-old says. "It was fun for me as a fan to watch him do something so drastically different because you don’t always get to see Mark do that sort of thing. He’s a wonderful dramatic actor and he’s so perfect to me for this movie because it’s a movie about nostalgia fandom. Who better to represent that than Mark Hamill?”

In the film, which hits select theaters July 28, Hamill's character, along with his wife (played by Jane Adams) abduct pint-sized James (Mooney) and raise him as their own. He grows up watching the only TV show he thinks exists, Brigsby Bear, which, as it turns out, was crafted by his captors to teach him lessons about the world — and urge him not to step outside of the safety of his home. There's even a poster in his bedroom that says, "curiosity is an unnatural emotion."

"It was an effort by his abductors to relay this lesson of, ‘don’t explore too much around you,’" he says of the poster and faux show. "It’s all an effort for him to not sneak out of the house... to figure out what’s really going on. But I disagree with it. Curiosity is a very natural emotion and we should be curious."

Hamill takes on the role of captor with a surprising amount of heart — he's not a clear-cut bad guy. But one thing the film doesn't make crystal clear is why James' abductors kidnapped him in the first place. It's obvious they have a great deal of love for this kid, but their motives are murky.

"I have my own theories. I certainly don’t want to deter persons from coming up with their own," Mooney says. "I would like to think that they wanted to save James from this outside world that they saw as incredibly negative. I think their intentions were — in their mind and heart — pure and good.”

So sure, you won't seem him swinging a light saber, but Brigsby Bear highlights Hamill is an entirely fresh and unexpected way.

More like this
At 14, Pauline Chalamet Fell In Love & Danced ‘The Nutcracker’
By Grace Wehniainen
In 'The White Lotus,' Leo Woodall Gets His Moment
By Gabrielle Bondi
Elizabeth Debicki On Her Approach To The Most Debated Scene From 'The Crown'
By Grace Wehniainen
'The Holiday' Director Just Addressed *Those* Sequel Rumours
By Sam Ramsden
Get Even More From Bustle — Sign Up For The Newsletter