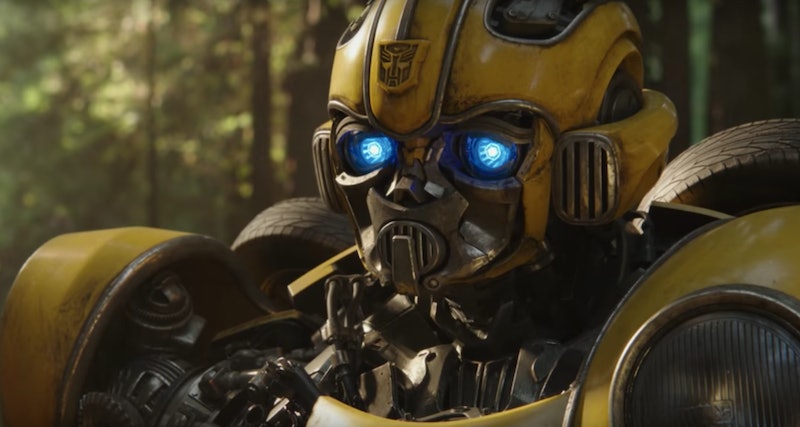 No one goes into a Transformers movie expecting sentimentality or complex emotions. Nor does one expect the Transformers themselves to have a mosaic of inner thoughts and feelings. You probably wouldn't accuse the Transformers franchise, which is based on a toy line and cartoon series from the '80s, of being psychologically heavy. "Emotional robot" is, after all, an oxymoron. But an emotional robot is exactly what audiences are getting in the franchise's latest installment, Bumblebee, opening Dec. 21. And the change in direction has a lot to do with the film's screenwriter, Christina Hodson, who wrote Bumblebee as the most emotionally available Transformer yet.

Set in 1987, Bumblebee stars Hailee Steinfeld as Charlie, an 18-year-old girl who is mourning the loss of her father while trying to find her way in the world. If she can just fix up an old car, she might have a the ticket to freedom that she needs. But reigniting Bumblebee's engine means involving herself in an intergalactic war between the Autobots and Decepticons that has spanned centuries. But unlike the other Transformers we've seen in the movies, Bumblebee actually has, like, feelings. He's sympathetic, kind, funny, cautious, gentle at times, yet strong, loyal, and fierce, all while without being able to speak a word.

"Bumblebee is so alive in this movie, it’s incredible," Hodson says when we chat over the phone before the film's release. Of course, all of the Transformers seem technically alive, they move and fight and metamorphose throughout the different movies, and tell plenty of jokes. But what Hodson is referring to is something that a number of critics have pointed out about the film already. That Bumblebee actually seems like a living, feeling, growing character in the new film, which feels like new territory for a franchise known for it's crushing metal robot wars.

As it turns out, Bumblebee's emotions were inspired by another franchise heavy in crushing metal robot wars: the Terminator movies. Specifically Terminator 2: Judgement Day. "Growing up, Terminator 2 was always my favorite movie, because it was this big huge action movie with this very small sweet heart in the middle of it," Hodson says. She specifically likes the end of the film, when Schwarzenegger's T-800 tells John Connor (Edward Furlong), "Now I know why you cry." It's the moment when the Terminator begins to understand emotions. Both Terminator 2 and Bumblebee, Hodson says, are, "about a robot figuring out what it means to be human, and there’s something so intimate about that."

That kind of intimacy was something that Hodson felt the film industry, and big-budget action movies specifically, has been lacking in recent years. "I was so often finding that, even the big action movies that I enjoyed, they lacked that intimacy and that sweetness, or really strong characters and character relationships. So that’s been a thing that has driven me, to use the canvas of a big giant fun movie, but also tell a very sweet simple character-driven story," she says.

Hodson, who has been tapped to write Margot Robbie's upcoming Harley Quinn movie as well as the recently announced Batgirl movie for DC, credits the film's director, Travis Knight, and the effects team with bringing to life on the screen what she created on paper. "Bumblebee's eyes are so expressive," she says, "he exceeded all expectations."

Bumblebee himself and his more emotionally available status aren't the only revolutionary additions to the franchise. The new movie also marks the first Transformers movie with a female lead. Charlie, Hodson says, was inspired by her two nieces, one young who is both girly-girl and tomboy, "already very demonstratively not one thing or the other," and another older niece who recently lost her mother to cancer. "When I was creating Charlie I had a very clear notion of who she was and who I wanted her to be," Hodson says. "So as big as the movie got and as many explosions that we added, I did have this very emotional heart that I could keep returning to."

Together, Charlie and Bumblebee provide an emotional core unlike anything seen in the other Transformers movies. She’s dealing with loss. She’s lost her father who has been the one person who understood her and gave her her voice. Then Bumblebee, of course, is lost completely; "He doesn’t have a voice [at all]," Hodson says. "I love the idea of these two broken people coming together and healing one another and their relationship being the thing that makes them whole again." With Charlie at the lead and a robot allowed to embrace his feelings, Bumblebee is allowed to atone for the sins of the previous films, and becomes downright feminist.

Feminism. Emotional heart. Healing. Finding your voice. We're talking about a Transformers movie, right? That is the subversive experience that is Bumblebee, a Transformers movie that comes with a side of sensitivity to accompany its bombastic explosions and yes, really cool transforming robots.