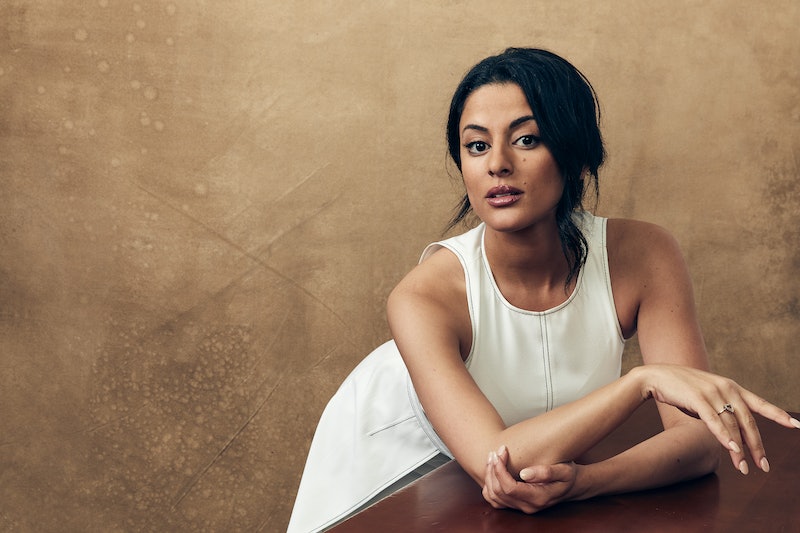 Spoilers ahead for YOU Season 2. Now that Joe is in Los Angeles for YOU Season 2, there's a whole new cast of characters for him to contend with. One newbie is Delilah, played in YOU Season 2 by Carmela Zumbado. She's Joe's neighbor, property manager, and an investigative reporter. She's also 15-year-old Ellie's older sister and guardian. (Ellie is sort of this season's Paco.)

Zumbado has had some small roles on big shows over the years, including Rosewood, Crazy Ex-Girlfriend, and NCIS (the Los Angeles and New Orleans versions). She was also recently in the film The Wall of Mexico, which followed a Mexican family who builds a wall to keep the locals from "stealing" their clean drinking water. She even previously played a reporter in 2015's Our Brand Is Crisis. Even still, YOU will be one of her most recognizable roles to date.

The Delilah of the show gets a little bit of a better character treatment than her book version in Hidden Bodies, upon which YOU Season 2 is based. Not necessarily in how her story ends (we won't spoil it), but in how she's described. Because the book is told from Joe's point of view, he can be a little (a lot) rude in how he judges people. In the novel, he describes his gossip journalist neighbor Delilah as a "star f*cker and a gold digger." He adds that she is "almost special" but that she's "not beautiful enough to be beautiful [and] not smart enough to be smart." He then went on to say she tries too hard. Ouch.

The Delilah of the TV show is beautiful and smart. She's trying to take powerful celebrities who prey on young women. Viewers get the feeling that she could be a real thorn in Joe's side if she catches on to who he really is. Zumbado hinted at this on Instagram, captioning photos of herself and Penn Badgley's characters from the show, "Meet your match." To be fair, that's the tagline for Season 2, but it could also symbolize that Delilah may figure Joe out. And, as a journalist, she could cause him a lot of trouble.

In the book, Joe eventually hooks up with Delilah as "almost special" as she is, and things take a turn in their friendship/relationship later on. But no matter how Delilah's journey ends in the show, at least her character was redeemed a bit from the book version. In a promo video for YOU Season 2, Joe describes Delilah again — but in much nicer terms than he does so in the book. "You seem so tense, a busybody and untrusting, but why? Maybe you've seen some things, maybe you've seen some trouble. Maybe you've gotten into some trouble. Is there anyone out there who protects you?" That's a far cry from "not beautiful," "not smart" and "star f*cker." Honestly, in YOU Season 2 we're just rooting for justice for Delilah.

In any case, Zumbado was just excited to get to be on the show. After her casting announcement went live, she posted it on Instagram with the caption, "Is this real life?! ?! ?! All I can say is t h a n k YOU!!!!! Thank you thankyou thank youuu." She went on to thank all the behind the scenes players like the showrunner and author and added, "I'm honored and so grateful and thrilled for YOU round TWO!"

This is a big role for the actor, who's been slogging it in the industry since 2011. This part will really put her name on the map, and she gets to do it all while resurrecting Delilah from the depths of Joe's judgmental perspective.